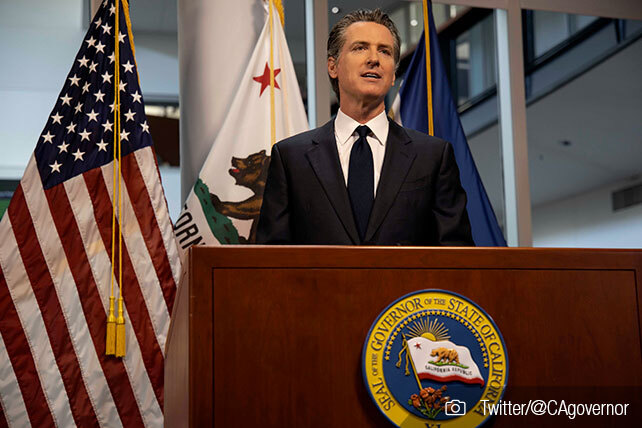 As COVID-19 cases continue spiking in California, Gov. Gavin Newsom has temporarily ordered a ban on singing, chanting, and group recitation in places of worship. In-person worship is still permitted, at reduced capacity and with face coverings, but the state’s public health department recommends that churches continue providing online services.

The order, issued on July 1, includes sanitation guidelines for church buildings, suggests shortened services, and temporarily prohibits items that move among congregants, such as offering plates. Churches aren’t the sole focus of the order, with venues such as bars, restaurants, theaters, and museums being shuttered for at least three weeks.

Though it was one of the first states to shut down, California has experienced a major setback, with record numbers of COVID-19 cases during the past two weeks. Health officials say relaxed social distancing policies and inconsistent hygiene measures have contributed to community spread.

In the July 1 order, California’s health department states, “Practices and performances present an increased likelihood for transmission of Covid-19 through contaminated exhaled droplets and should occur through alternative methods like internet streaming.”

Earlier this year, the CDC raised concerns about singing after 87 percent of members of a Washington state chorale tested positive for Covid-19 and two died. “The act of singing, itself, might have contributed to transmission through emission of aerosols, which is affected by loudness of vocalization,” stated a CDC report, which also warned about the impact of “super-emitters.”

Some California faith leaders aren’t happy with the order, often pointing to racial-justice protests where crowds engaged in singing and chanting. The Rev. Samuel Rodriguez, president of the National Hispanic Christian Leadership Conference, says it’s “completely discriminatory” to ban singing in churches after allowing “tens of thousands to march in protest without wearing masks.”

Sean Feucht, a Bethel Worship pastor who recently lost a primary election for Congress, launched a petition against the order, calling it an “unprecedented attack” on religious liberty. On Instagram, the worship leader says it’s time to “fight back and go on the offensive!” Feucht, who’s led worship in Iraq and North Korea, says he never expected worship would be “illegal” in California.

In England, where restrictions on public gatherings have recently eased, communal singing is also temporarily prohibited. But that isn’t stopping worshipers from praising God in creative ways. Chris Demetriou, pastor of Cornerstone the Church in Walton-on-Thames, Surrey, says, “We cannot sing, but we can stand, we can clap, and there is nothing wrong with finding other ways to express yourself.”

During the shutdown, congregants were invited to record themselves singing at home. The church then combined those clips to create a “chorus” that’s now played as a worship prelude. Some older worshipers at Cornerstone admit being nervous about returning to in-person worship but say they’re being careful. Many are matching their face masks and outfits.

Pastor Demetriou believes the pandemic will cause a spiritual awakening. “People need God’s touch,” he says. “At the moment, I think God’s got a lot of people’s attention that he didn’t have before.”