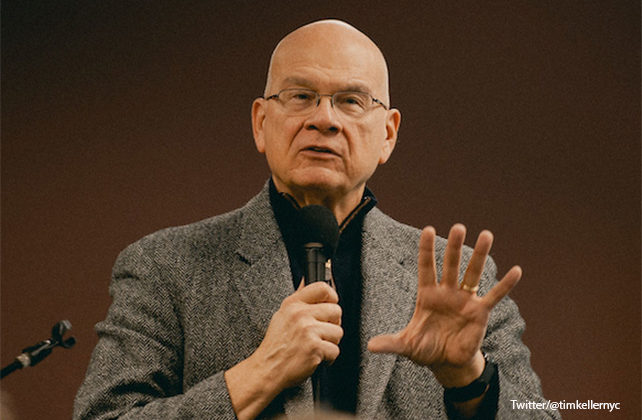 Keller Tweets About Christians and the Freedom of Conscience in Politics:

“The Bible binds my conscience to care for the poor, but it does not tell me the best practical way to do it. Any particular strategy (high taxes and government services vs low taxes and private charity) may be good and wise and may even be somewhat inferred from other things the Bible teaches, but they are not directly commanded and therefore we cannot insist that all Christians, as a matter of conscience, follow one or the other. The Bible binds my conscience to love the immigrant–but it doesn’t tell me how many legal immigrants to admit to the U.S. every year. It does not exactly prescribe immigration policy. The current political parties offer a potpourri of different positions on these and many other topics, most of which, as just noted, the Bible does not speak to directly. This means when it comes to taking political positions, voting, determining alliances and political involvement, the Christian has liberty of conscience. Christians cannot say to other Christians ‘no Christian can vote for…’ or ‘every Christian must vote for…unless you can find a Biblical command to that effect.‘ “

After many comments that ranged all over the spectrum, Keller posted one last comment to his series of Tweets that read, “Some folks are missing the point of this thread. The Bible tells me that abortion is a sin and great evil, but it doesn’t tell me the best way to decrease or end abortion in this country, nor which policies are most effective.”

In his “How Do Christians Fit Into the Two-Party System? They Don’t,” Keller wrote, loving our neighbors is the reason a Christian should be involved politically. He gave examples of helping better public schools, improving the justice system, and ending racial segregation as some of the things Christians should continue to be involved with. Keller said that although a Christian can register under a specific party and participate under that party, one should “not identify the Christian church or faith with a political party as the only Christian one.”

Identifying the church with a particular party may impress upon a non-believer that to be converted “they need not only to believe in Jesus but also to become members of the (fill in the blank) Party.” The other reason Keller gave was “most political positions are not matters of biblical command but of practical wisdom.”

Keller elaborated, “This does not mean that the church can never speak on social, economic and political realities, because the Bible often does.” Quoting Matthew 22:39, he wrote that as a Christian it isn’t an option to not speak out against moral requirements: “Racism is a sin, violating the second of the two great commandments of Jesus, to ‘love your neighbor.’ The biblical commands to lift up the poor and to defend the rights of the oppressed are moral imperatives for believers.”

He asked questions about how one should help the poor, “Should we shrink government and let private capital markets allocate resources,” or is it better that “we expand the government and give the state more of the power to redistribute wealth?” Keller proposed the question, “Is the right path one of the many possibilities in between?” The point he expressed is that the Bible doesn’t give the exact answer to these questions in every situation.