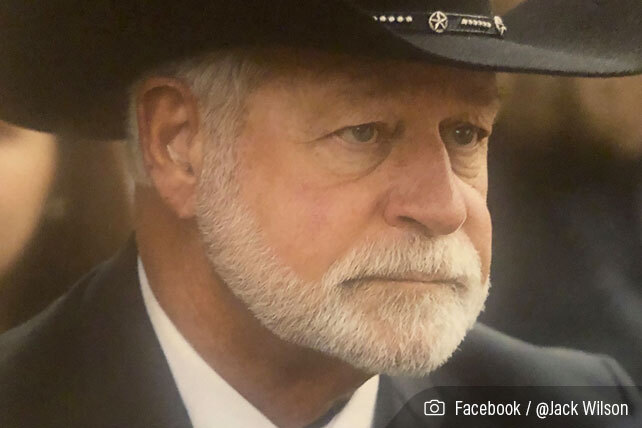 The man who took down the shooter who killed two people at a church in Texas last year will not be charged with murder. A Tarrant County grand jury has decided not to indict Jack Wilson for fatally shooting Keith Kinnunen, a decision praised by county prosecutor Tim Rodgers.

“Texas law allows an individual, when they witness somebody placing others at risk of serious bodily injury or death, to act with deadly force to protect the other individuals,” said Rodgers, who is chief prosecutor for the Law Enforcement Incident team in the Tarrant County Criminal District Attorney’s Office. “Mr. Wilson did just that. He did it responsibly and, as a result, he was justified under the law in his actions.”

On Dec. 29, 2019, 43-year-old Keith Thomas Kinnunen entered West Freeway Church of Christ in White Settlement, Texas, during a worship service and shot and killed Anton “Tony” Wallace, 64, and Richard White, 67. Jack Wilson, a church elder and head of the church’s security team, then killed Kinnunen with one shot to the head.

Kinnunen had a criminal record, as well as a history of drug abuse and mental illness. He was known to church members, but that morning was wearing a wig, a fake beard, and a long coat.  According to Pastor Britt Farmer, West Freeway had helped Kinnunen more than once by giving him food, but would not give him cash, which made him “mad.” The security team, of which White was a member, noticed Kinnunen’s suspicious appearance and was on the alert. Both White and Wilson drew their weapons when they saw Kinnunen pull out a shotgun. White fired at Kinnunen and missed, after which the gunman shot White and then Wallace, a church deacon who was serving communion.

At that point, said Wilson, “The only clear shot I had was his head because I still had people in the pews that were not all the way down.” Wilson has years of experience as a firearms instructor and has trained members of the church’s security team. “When I teach people, I teach them not to shoot the head unless that’s all you have,” he said.

According to The Dallas Morning News, Texas law at one time restricted guns in houses of worship, but a mass shooting in 2017 in Sutherland Springs, Texas, that left 26 dead and 20 injured led to those restrictions being lifted. Now, houses of worship may have armed volunteer security teams. West Freeway decided to form a church security team 18 months prior to the shooting because of crime in the neighborhood.

In January 2020, Texas Gov. Greg Abbott awarded Wilson the Governor’s Medal of Courage for his bravery. The award is the highest honor the governor can confer on a civilian. After the grand jury’s decision was announced, Abbot tweeted, “Security officer who killed White Settlement church shooter won’t face charges. This is exactly right.”

This is exactly right.

He was defending parishioners — two of whom had already been shot.

This is why the 2nd Amendment is needed—to defend against murderous attacks. https://t.co/ZFtSWCCsuK

While many have labeled Wilson a “hero,” he has said he was only doing his job. When he received the Medal of Courage from Gov. Abbott, he told reporters, “I personally don’t feel like I killed a human being. I took some evil out. That’s how I’m processing this whole situation.”