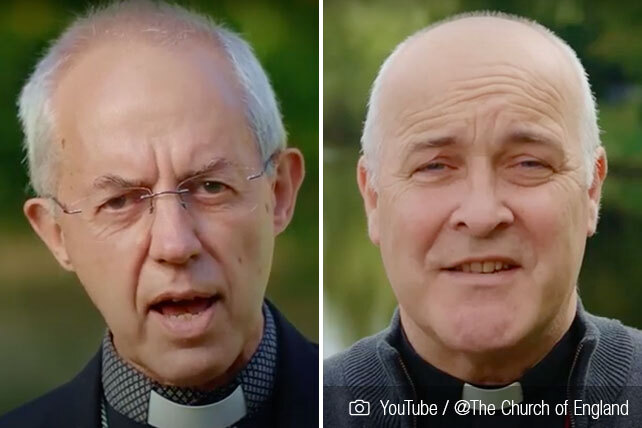 The Church of England (COE) has released a body of work called Living in Love and Faith (LLF) that addresses LGBTQ issues and is designed to foster dialogue. While it does not change the church’s official teaching that marriage is between one man and one woman, some argue its nuanced approach opens the door to such changes in the future.

“The Church of England is keenly aware that issues of gender and sexuality are intrinsic to people’s experience; their sense of identity; their lives and the loving relationships that shape and sustain them,” says the Living in Love and Faith About page. “We also know that the life and mission of our Church—and of the worldwide Anglican Communion—are affected by the deep, and sometimes painful, disagreements among us which have been debated and discussed on many occasions over the years.” The page goes on to explain:

These divisions have come into sharper focus because of society’s changing perspectives and practices, especially in relation to lesbian, gay, transgender, bisexual and intersex people. The Church wants to understand what it means to follow Christ in love and faith given the questions about human identity and the variety of patterns of relationship emerging in our society, including marriage, civil partnership, cohabitation, celibacy and friendship.

Our hope is that the Living in Love & Faith Resources will enable us to engage with one another across communities to build greater understanding & appreciation of our common humanity & of how each of us is made in the image of God. https://t.co/gwhEIhvlvR

Published Nov. 9, Living in Love and Faith is a collection of materials that include a book, podcasts, a five-session course, and videos of people’s stories. The purpose of the project is to help Christians wrestle well with what it means to love God and their neighbors when it comes to sexuality, identity, gender, and marriage. LLF began in 2017 following a four-day meeting of the General Synod of the Church of England. During that meeting, the church reiterated that marriage is between one man and one woman while also voting to affirm transgender people and welcome them into church services. The meeting highlighted the divisions within the COE regarding the church’s positions on gender and sexuality.

After the General Synod met, the church’s archbishops commissioned 40 people to put LLF together over a three-year period. Bishops of the Church of England led the effort, but the team included members of “four working groups focusing on the Bible, theology, history and the social and biological sciences,” as well as people who were willing to share their personal stories. According to Episcopal News Service (ENS), “The team producing the resources included both LGBT people and conservative Christians.”

Those who share their stories in the LLF videos come from “a range of ages, ethnicities, and churchmanship,” said Rev. Canon Dr. Andrew Goddard, who served as a consultant on the LLF Co-ordinating Group. In the videos, said Goddard, “We meet couples, single people, those who have experienced divorce or bereavement, those who identify as gay, lesbian, trans, intersex, same-sex attracted.” Goddard has provided information about Living in Love and Faith in a FAQ page here.

Living in Love and Faith: Strengths and Controversies

One of the greatest strengths of Living in Love and Faith is arguably the empathy and sensitivity with which it approaches the challenges people face when navigating their sexuality in a broken world. At the same time, those looking for LLF to take a clear position on the definition of marriage might end up feeling frustrated.

The book, “Living in Love & Faith,” explores identity, gender, sexuality, marriage, and life in general by evaluating the Bible’s teaching on these topics, the history of church teaching, science, trends in society, and people’s personal experiences. It is clear that the authors want to thoughtfully examine the tension between the view of life Scripture presents and the complexities of our experiences. It should be noted that, early on, the book does define marriage as being between one man and one woman and that it bases this definition on Scripture. However, elsewhere the authors acknowledge that some theologians believe Scripture supports same-sex relationships. “Advocates of each of these approaches appeal to the Bible and try to read it carefully,” say the authors. “They emerge, however, with different understandings of what the Bible requires of us—different understandings of what might be meant by a ‘biblical view of marriage.’”

A statement from the bishops at the end of the book says,

Disagreements are to be found among us as bishops. We do not agree on a number of matters relating to identity, sexuality, relationships and marriage. Some of those differences of view relate to the ethics and lifestyle of opposite sex relationships and some relate to questions around gender and pastoral provisions for transgender people. Most pressing among our differences are questions around same-sex relationships, and we recognize that here decisions in several interconnected areas need to be made with some urgency.

So more than calling readers to land on a certain definition of marriage, the bishops seem to be asking believers to move toward constructive dialogue with one another despite their differences.

The Daily Mail speculates that Living in Love and Faith “paves the way” for the Church of England to revise its position on gay marriage. But Goddard does not believe this is probable. He says, “My own sense is that while a growing number within the church now support same-sex marriage they are still a minority and very few bishops support such a development. It’s therefore not likely to happen in the near future and far from inevitable that it will be accepted.”

In a video introducing the project, Archbishop of Canterbury Justin Welby acknowledged the open-ended nature of the Living in Love and Faith materials. “Living in Love and Faith doesn’t impose its views,” he said. “It listens to different theological and biblical views and enables us to explore what God’s will is for the church and to learn to live with each other.” The archbishop said that his “deepest prayer” for the resource is that believers would “demonstrate the same love for one another as we have received from God himself.”