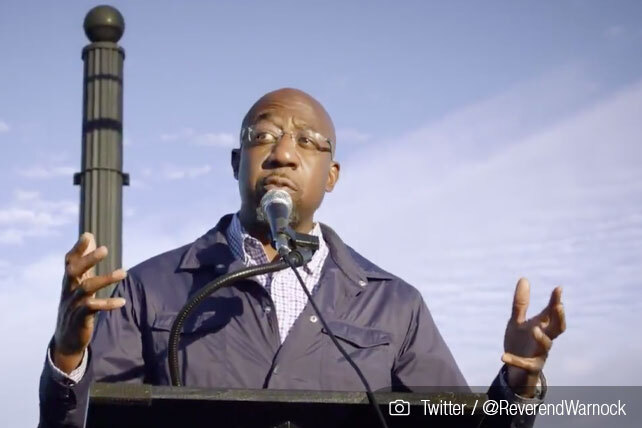 Control of the U.S. Senate hinges on the outcome of two runoff races in Georgia, one of which pits a Democratic pastor against the Republican incumbent. Raphael Warnock is the longtime senior pastor of Atlanta’s Ebenezer Baptist Church, Martin Luther King Jr.’s former congregation. Because neither Warnock nor his opponent, Sen. Kelly Loeffler, received more than 50 percent of votes on November 3, a runoff is scheduled for January 5.

In Georgia, which narrowly went “blue” for President-Elect Joe Biden, voters are being bombarded by ads—including some that attack Warnock’s progressive beliefs.

Who is Raphael Warnock?

Warnock, 51, grew up in Savannah public housing with 11 siblings. “The family was short on money but long on faith, love, and humor,” notes his online bio. A graduate of Morehouse College and Union Theological Seminary, Warnock pastored churches in New York and Maryland before taking the helm at Ebenezer in 2005—the youngest pastor to lead that historic congregation.

As part of the Progressive National Baptist Convention, a denomination of about 2.5 million members, Ebenezer and Warnock espouse liberation theology and caring for low-income and oppressed people. “Warnock believes his impact does not stop at the church door,” his bio states, “and has been an advocate to expand health care coverage and to ensure hardworking Georgians can make a living wage.”

On his Twitter profile, Warnock proclaims, “Your vote is sacred.” Regarding the doubts some Republicans are raising about election results, he tweets: “These efforts to undermine faith in our democracy are wrong. There is no evidence to support any of these claims, and @KLoeffler should be condemning this sort of vile (attack), not spreading them.”

What Critics Say About Raphael Warnock

High-profile critics charge Warnock with holding unbiblical beliefs. This week, Sen. Marco Rubio (R-FL) shared video of a 2011 sermon in which Warnock says, “Nobody can serve God and the military.” When asked to explain, Warnock said, “It was about priorities,” adding, “As a person of faith, my ultimate allegiance is to God.”

Warnock also supports abortion, which he considers a matter of health care. “I believe unequivocally in a woman’s right to choose, and that the decision is something that we don’t want government engaged in,” he says. The pastor’s campaign has “focused on women’s health, women’s choice, reproductive justice,” he says, calling those things “consistent with my view as a Christian minister.”

In response, football analyst and outspoken Christian Tony Dungy tweets, “I’d like to know what book the candidate uses as their foundation for truth… It couldn’t be the Bible.” Former NFL player and pro-life advocate Benjamin Watson tweeted, “Equal access to kill a son or daughter is NOT justice… One cannot truly fight for JUSTICE while simultaneously denying it.”

Warnock’s supporters say Republicans are trying to paint the pastor as a radical by vilifying his faith. Dallas Pastor Freddy Haynes accuses Warnock’s opponents of using “the same racist playbook” they drew on with former Obama pastor Jeremiah Wright. Haynes also notes that although MLK is “lauded and applauded right now, in his last years (he) was one of the most hated men in this country, especially by the same crew that is coming for Warnock right now. The hypocrisy in their attacks…is glaring.”