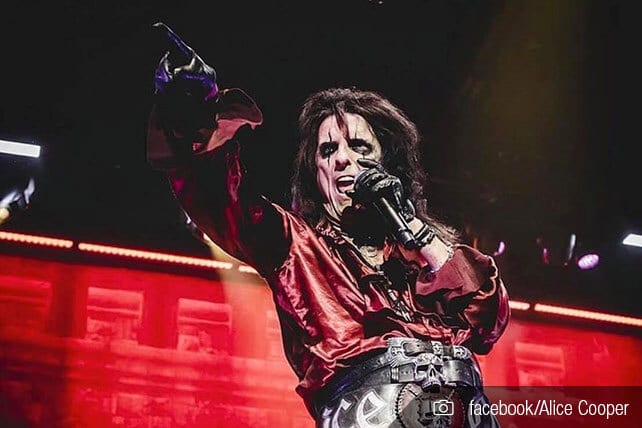 Iconic 73-year-old rock legend and devout Christian Alice Cooper shared with Page Six that not only does he pray and read the Bible every day, but he credits his faith in God for his sobriety.

The “Poison” rocker said he was never an “aggressive or mean drunk,” but would drink at least an entire case of beer a day to obtain what he called “that golden buzz.” It wasn’t until his ballet instructor wife Sheryl Goddard filed for divorce in 1983 after nearly 7 years of marriage and three children that Cooper realized he had a drug and alcohol problem he needed deal with. So he checked himself into rehab. Telling his story, Cooper recalls his wife grabbing him by the ear and telling him, “Hey, the party’s over.”

Once through rehab for drug and alcohol addiction, Cooper called his estranged wife and told her, “It’s done!” He proved to Sheryl that he was sober, and Cooper and his wife reconciled a year later. They have now been married for almost 45 years. During an 2019 interview he said that starting to go to church was one of the deals they made for their reconciliation.

Cooper said he never went to Alcoholics Anonymous, and gives credit solely to God for never craving alcohol or drugs after leaving rehab.

“Everyone said, ‘Oh you have such great willpower.’ I said, ‘No, God has great willpower. He took it from me,’” he shared. Cooper explained that with all the pastors in his life, from his grandfather to his dad, he had “strong prayer” happening for him. “Even the doctor said, ‘This is an absolute miracle.’ I said, ‘Why?’ They said, ‘Well, you should be hiding bottles all over the house and you should be sneaking drugs.’ I said, ‘I have absolutely no desire for that at all.’”

Alice Cooper and the Theatrical Dark Side

So what did Cooper’s pastor and evangelist father think of his theatrical rock lifestyle that includes songs ‘Feed My Frankenstein,’ ‘Halo of Flies,’ ‘Black Juju,’ ‘Go to Hell,’ and ‘Dead Babies’? The ‘School’s Out’ singer told Page Six, “My dad knew my sense of humor. My dad was very cool. He loved rock and roll. He said, ‘I love the music; I can’t abide the lifestyle.’ ” Cooper says what he does on stage is only a character he plays. He says his father summed up the theatrics by telling Cooper, “I know the character you’re playing. He’s comical. He’s a villain, but at the same time, he’ll slip on a banana peel.”

Before the pandemic, Cooper was playing 200 shows a year and stays active playing many rounds of golf throughout the week.

Mark Driscoll once interviewed late theologian R.C. Sproul and had him retell how he met Alice Cooper. Sproul laughingly said the folktale was true that the two ran into each other in the clubhouse of a golf course and ended up playing a round together. The theologian shared that they had a great time, saying, “He was an absolute delight to play with [and] was very committed to his Christian faith.”

Cooper shared his powerful testimony with Harvest Christian Fellowship’s senior pastor Greg Laurie during an exclusive interview in 2019. The shock rocker said, “I came to Christ because of my fear of God. I totally understood that hell was not getting high with Jim Morrison. Hell was going to be the worst place ever. In fear, I came back to the Lord.” In that interview, he also shared how his pastor encouraged him to continue performing as Alice Cooper even though he thought he needed to quit. He says his pastor told him God doesn’t make mistakes, and that he gave Cooper that platform to share his testimony.