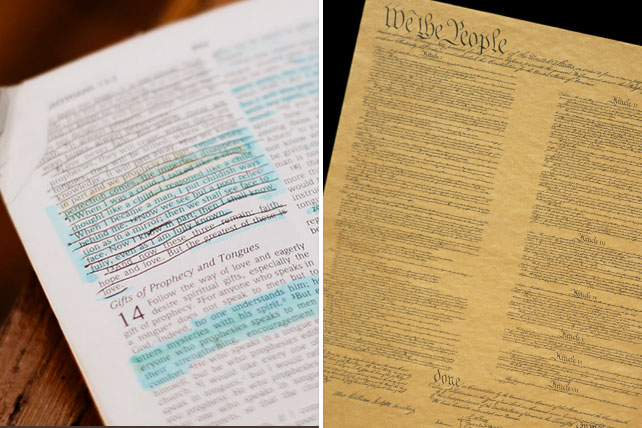 A Wandering Aramaean Was Our Father

As Christians, our founding fathers are Abraham, Isaac, and Jacob, not Washington, Jefferson and Adams. Our founding ethical document is the Mosaic Law and the Sermon on the Mount, not the U. S. Constitution.

As Christians in this heated moment of national division and political rancor, we need to be reminded that our first calling is to be a set-apart “Christian colony” who manifests and communicates Jesus’ Way of life and love. While we should “work for the peace and prosperity” (Jer. 29:7) of this nation by casting our vote and being politically engaged and responsible, we dare not lose sight that our main preoccupation should be in advancing the vision and values of the global community of Jesus-followers—the Church.

Jesus’ family transcends all national borders and interests. We should feel a greater kinship and loyalty to an Iraqi or Russian Christian than our unbelieving American neighbor we talk to over the fence. But do we?

The Israelites—generation upon generation—would regularly rehearse their history and recite the following words together to remember where they came from—especially once they find themselves prospering in a land abundance: “A wandering Aramean was my father” (Deut 26:5). Rachel Adelman speaks of the effect of this reminder:

“Schooled as “strangers in a land not their own” as descendants of the wandering Aramean, the way we tell our history serves as the basis for a higher ethic, as it says throughout the Torah: “You shall not wrong a stranger or oppress him, for you were strangers in the land of Egypt”. It is precisely the consciousness of being alien (with its concomitant sensitivity to the other) that ironically grants the right to dwell in the land. The short history we recite, again and again—upon recalling the Exodus at Passover and offering the first fruits—reminds us of this tenuous relationship to the land, a contingent gift from God. What raises us to “chosenness” and confers a claim to that gift is the mandate of compassion for the stranger in our midst, and remembering that we were once (and on an existential level, may always be), strangers in a strange land. We are called upon to link living in the land with compassion for and just behavior towards those “strangers” who dwell among us”.

Many American Christians may need to be reminded of this spiritual heritage as well, lest we forget that we too are spiritual children of the wandering Aramean—Abraham—and that our spiritual ancestors spent 400 years as slaves in Egypt before coming into newfound freedom in the land of promise. (The African American Church resonates deeply with the Exodus narrative, and knows what the Jews have always known: what happened long ago is not simply in the past; it is alive and still a part of who we are today collectively.)

If we trade our ancient biblical spiritual roots for 18th century American roots, trading Abraham for Jefferson, we risk becoming more passionate about defending the “American way” than representing God’s Way for Americans in need of a Better Way.

This is especially relevant under an administration that celebrates an “America-first” agenda. I find myself asking, How can children of a wandering Aramean whose main vocation is to “be a blessing to all nations” (Gen. 12:1-3) be comfortable with rhetoric so passionately America-focused? How can citizens of an “others-first” Kingdom rally around such an “us-first” platform?

I have regularly challenged Christians on the political left and right, not with an interest in expressing what I think is the best path forward for the future of this earthly nation. I can easily see why people choose to vote either Republican or Democrat, and I can respect both.

My critiques, rather, are typically aimed at challenging Christians who seem to be getting more wrapped up in fighting for America’s future and representing American partisan values more passionately than fighting for the pure witness of Christ’s Kingdom community and the reputation of the worldwide Church. As an ordained minister of the gospel of Jesus and His Kingdom, my focus is not on making America great, but speaking prophetically to followers of Jesus about the witness and well-being of the worldwide Body of Christ, the Church.

I have spent the past 20 years learning how to live as a loyal patriot of Jesus’ upside-down Kingdom, and abiding (gratefully yet lightly) in this land as a resident alien and wandering pilgrim who knows which Kingdom I am called to further and where my ultimate allegiance lies. I am “longing for that better country” (Heb. 11:16), and called to point people toward its quiet emergence even now where ever Christ’s disciples are gathering and already sipping the first fruits of that New Wine of the coming Kingdom.

As a student of history, I also know what many of us think is unthinkable: that America will eventually go the way of all earthly empires. America is not God’s chosen nation; it never has been and never will be. But God’s purposes are still being carried forward through the Covenant made with that Wandering Aramean and his descendants—which has now been expanded to include all who are “in the Messiah”—both Jew and Gentile.

As has always been the case, “The nations rage, and the peoples plot a vain thing; the kings of the earth take a stand, and the rulers take counsel together” (Ps. 2). Meanwhile, God’s people — his faithful remnant — are scattered across the globe—from every tribe, tongue and nation. And it is those who carry His Kingdom message and live faithfully as his royal ambassadors who will be vindicated in the end (2 Cor. 5:20).

We will all stand before God someday and be rewarded based on whether or not we were fully committed citizens and patriots of His upside-down Kingdom. The sheep and the goats will not be separated according to earthly nations: Americans, Russians, Chinese, etc. They certainly won’t be sorted according to how they voted as temporary residents of a temporary kingdom—i.e., Democrats and Republicans.

The sheep and the goats will not be separated into Conservatives and Liberals, Capitalists and Socialists, small government or big government proponents, etc. I suspect if St. Peter is manning the Heavenly gate, he will have never have heard of a Democrat or Republican — or the United States of America.

Rather, the sheep and goats will be separated into two groups—those who actually followed and obeyed Jesus’ teachings, and those who called him “Lord, Lord” on Sundays, but never really surrendered to his reign in their everyday living, thinking, and believing. Let all who have ears to hear, listen:

Every four years on Election Day we are marked by a red “I Voted” sticker as we leave the polls. Meanwhile, every single day we are called to be marked by the Kingdom values and ethics of Jesus as we leave the house and go out into the world as his representatives. Do we bear the marks of Jesus? Do we have “the aroma of Christ” (2 Cor. 2:15) or not?

Where does one start? Begin by reading the Sermon on the Mount (Matt 5-7) and trying to put it into practice—especially with our public interactions. If you take this challenge seriously, you won’t have as much time or energy left for American politics. You will find your burgeoning Kingdom citizenship is a full-time, all-consuming calling. Let all who have hears to hear, listen:

“Seek above all the Kingdom of God and Christ’s kind of justice” (Matt 6:33 my paraphrase).