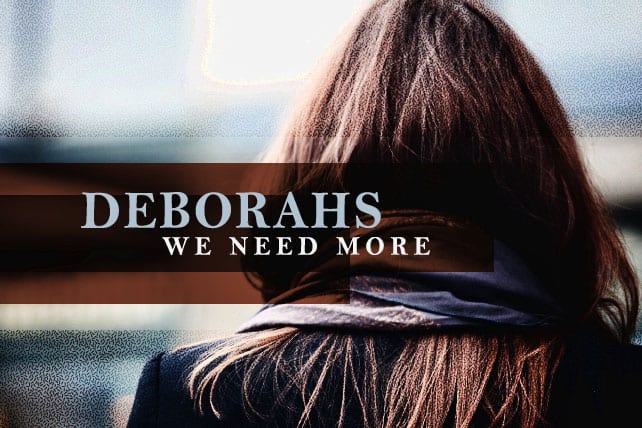 My wife and I have three daughters—aged 11, 9 and 7. (We managed to sneak a little boy in there at the end, but ours is still a house full of women.) So the story of Deborah—the first and only female judge in Israel—speaks to what I hope for my daughters, what I dream for them and what I pray over them.

More than almost any other passage in Scripture, Deborah’s story emphasizes a truth that evangelical churches too often neglect: God gives to women every spiritual gift that he gives to men.

There is a myth alive today that men should be taught deep, rich theology … while women should learn how to match their curtains with their pillows, or how to be a good housewife, or how to not feel sad on rainy days. As one prominent author points out, if you attend most Christian women’s conferences and they teach from Ephesians, you can bet they’ll stick to Ephesians 5—talking about the role of the wife in marriage. It’s as if the rest of Ephesians is written for men, and Paul threw in a few verses for the women in his audience.

At the risk of stating the obvious, let me be clear: The whole book of Ephesians is for women. And so is the entire Bible. If women want to know God’s will for their lives, if they want to be shown what God desires for them, they had better not limit themselves to Ephesians 5 and Proverbs 31. Every chapter of every book of the entire Bible is for women. And they need to know it all.

Women shaped by the Word won’t grow up to be weak, superficial waifs. They become leaders. Deborah certainly was. She was a prophet, the wisest person in all of Israel. People came to her for godly counsel, and she led the nation through a time of oppression and war.

Now, some people look at Deborah and try to say that the only reason she led Israel was that there weren’t any “real men” around to lead. But nothing in Judges indicates that. Yes, Barak (her military counterpart) may have wavered in his faith. But the text never says that Deborah’s leadership is a shame on the nation of Israel. Instead, it says that Deborah judged and led because God gifted her to do so.

Our ministry to women at the Summit doesn’t aim to simply create better wives and mothers. Yes, if that is God’s role for you, we want to equip you to do it for his glory. But women’s ministry needs to be about more than being a wife or a mother; it needs to be about seeing women leverage their lives for the kingdom of God. And when God has called women to lead, it means we equip them to lead.

At this point, you may be inclined to ask: Are you saying that there aren’t any distinctions between men’s and women’s roles? Not in the least. In both the Old and New Testaments, God establishes certain positions that he reserves only for men and others he reserves only for women. Women, for example, were never priests in the Old Testament. And as for Deborah, even though she led the nation of Israel through wise government, she didn’t lead the army. In the New Testament, the Apostle Paul points out that the role of pastor-elder is one that only men can hold (1 Tim 2:12–3:1).

Where people get tripped up is in thinking that these distinct roles create a dichotomy: Either you believe there is no distinction of roles at all; or you believe women can only serve in some kind of diminutive role, that they should never be leaders in any sphere.

But that’s not a dichotomy the Bible sets up. Scripture shows us that women teach and lead and prophesy and exhibit every spiritual gift that men do. The New Testament calls them deaconesses (Rom 16:1-2), fellow workers for the gospel (Phil 4:1-2) and prophetesses (Acts 2:17). At one point Priscilla is even said to be the tutor of one of the greatest preachers of the day, Apollos (Acts 18:26). But none of these leadership roles subverts God’s order, nor do they mean that we abolish the distinct role of pastor-elder. Women are equals without being equivalents.

“God forbids one kind of role in the church to women, as he did in Israel. We must not jump from that to forbidding all teaching tasks to women. … It is better to say that everything a man who isn’t an elder can do—a woman can do also.”

So for women specifically, I want to say three things:

1. God has a calling on your life. Your role is not to sit on the sidelines, make casseroles and have kids. You are not simply your husband’s wife or your children’s mother. So do you know your calling? Have you risen up to obey it? Like Deborah, you need to get in the fight.

2. You are a leader with spiritual authority. Yes, you. I know a lot of women who are entirely too dependent on their husbands. They never take any spiritual responsibility and act like “submitting” to their husband means they shouldn’t ever exercise any spiritual authority anywhere. But that’s not Deborah (who was married, by the way). Here we find a leader of the highest caliber, the wisest and most courageous person in all of Israel. So don’t hide behind your husband. If God has called you to lead, then lead.