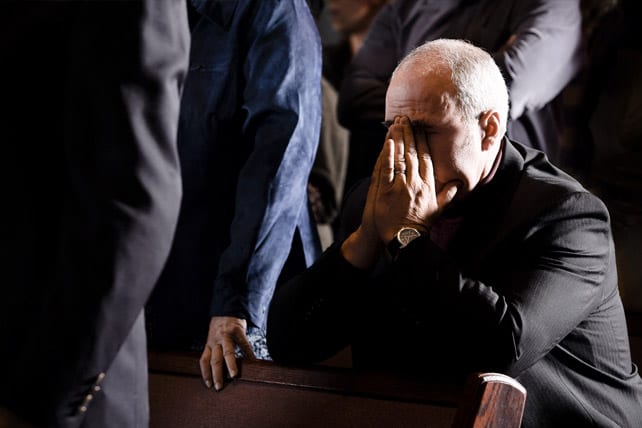 When was the last time you had an unanswered prayer?  Maybe it was a very big request, like healing from a serious illness, relief from financial hardship or the restoration of a failed relationship.  Did you wonder about, “was my prayer not answered positively because I lack faith?”

Or stated another way, “Is sorrow due to a lack of faith?”

That was a question posed to John Piper from a listener to his podcast Ask Pastor John.

The question was based on the biblical story of Jesus healing a demon-possessed boy that shows up in several places in the New Testament.  Here is the passage from Matthew 17:14-20:

14 When they came to the crowd, a man came up to Jesus, falling on his knees before Him and saying, 15 “Lord, have mercy on my son, for he is a lunatic and is very ill; for he often falls into the fire and often into the water. 16 I brought him to Your disciples, and they could not cure him.” 17 And Jesus answered and said, “You unbelieving and perverted generation, how long shall I be with you? How long shall I put up with you? Bring him here to Me.” 18 And Jesus rebuked him, and the demon came out of him, and the boy was cured at once.

19 Then the disciples came to Jesus privately and said, “Why could we not drive it out?” 20 And He said to them, “Because of the littleness of your faith; for truly I say to you, if you have faith the size of a mustard seed, you will say to this mountain, ‘Move from here to there,’ and it will move; and nothing will be impossible to you.

Is My Prayer Unanswered from Too Little Faith Or Wrong Faith?

The question dealt with seeming inconsistencies in Jesus’ references to faith.  In verse 17, Jesus calls the disciples faithless (unbelieving).  Then in verse 20 he tells them that if they had the faith of a mustard seed they could move mountains.  A mustard seed is the smallest of all seeds. If the disciples had the smallest of faith, then why is it their small faith couldn’t cast out a demon?

Piper began his answer with a statement that you don’t often hear from accomplished theologians. He said, “I don’t fully understand them (the differing references to faith) and find them baffling.”

Before giving his take on the passage he told listeners, “There are passages that are baffling and leave questions. I’m just struggling out loud and invite others to join me.”

Piper points out that the some Bible passages make answered prayer dependent on the condition of the heart.

James 4:3 – “When you ask, you do not receive, because you ask with wrong motives, that you may spend what you get on your pleasures.”

I John 5:14-15 – “This is the confidence we have in approaching God: that if we ask anything according to his will, he hears us. And if we know that he hears us—whatever we ask—we know that we have what we asked of him.”

Piper’s conclusion for the listener; be sure to take into account all the teachings of the Bible on answered prayer including the condition of the heart and the sovereign will of God rather than assuming that every case of unanswered prayer is a case of defective faith.