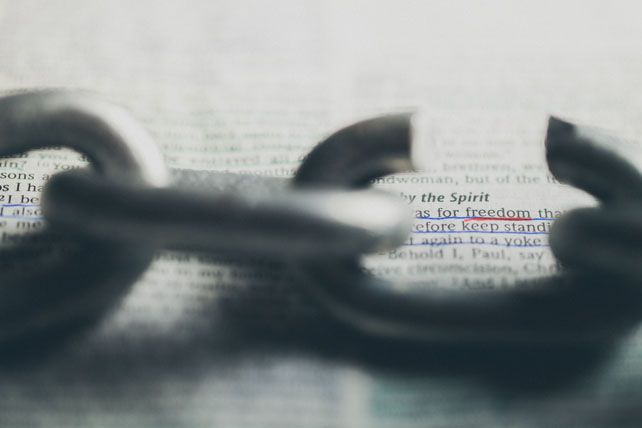 I’m Tullian Tchividjian. Many of you already know this (though some of you may not), but I used to be a pastor. Some would even say a successful pastor. I was leading a large church that operated a college-prep school and a seminary, writing a book a year, traveling extensively all over the country to speak at conferences, churches and various events. I was on TV every week around the world and on the radio every day. However one wants to define a “celebrity pastor”—I was one.

And then it all came crashing down.

Two things I had come to believe were secure forever (apart from my relationship with God) were my 21-year marriage and my calling as the Senior Pastor of Coral Ridge Presbyterian Church in my hometown of Fort Lauderdale, Florida. I lost both during the spring and early summer of 2015—due to my own sin and selfishness. I was unfaithful to my wife and therefore deserved to lose both my marriage and the ministry God had given me.

But as shocking as all of my self-imposed losses were, my instinctive response shocked me even more. Rather than blaming myself for all the hurt I caused, I blamed everyone else for all the losses I was experiencing. The self-pity, the rage, the self-justified resentment, the deluded rationalization, the deep selfishness, the perverted sense of entitlement—it was all there. Every day. All day.

As I’ve said elsewhere, I was lost, undone and angry at God, others and myself—doing everything I could to “rescue” myself from the wreckage I caused. I was in full self-salvation mode. What should have been my wake-up call to a newfound humility and repentance became my excuse to dig in my heels even deeper. I was heading off into the far country…

Maybe these hideous things, which flowed from my depths with such natural ease, shouldn’t have shocked me. After all, I was well known for talking about my own messed-upness, talking openly about my sin and selfishness, my faults and fears, my pride and pains. I never pretended to have it all together. In fact, one of the reasons people listened to my sermons and read my books and came out to hear me speak was because I was honest about my brokenness and the amazing grace of God that covers us at our worst. I was known for saying that God loves bad people because bad people are all that there are. So I knew I was bad—I just didn’t know I was THAT bad.

What was wrong with me? What was going on? Why did I so quickly and instinctively seem to abandon everything I believed to be true and right in the face of this severe personal catastrophe?

What I see now that I couldn’t see then is that this explosion had been building for a few years. There was a slow and subtle shift that came on like the slow creep of the tide rather than a sudden tidal wave. It was a shift from locating my identity in what God had done (the message of the Gospel) to locating my identity in what I had done (my success as a messenger of the Gospel).

In other words, my worth, my value, my deepest sense of who I was and what made me matter—my identity—was anchored in things like my status, my reputation, my position, who my friends were, my skill with words, my ability to lead, the praise I received, the opportunities I had, always being in demand and the center of attention, financial security, and so on.

And because of this, my losses did not simply usher in grief and pain and shame and regret. They ushered in a severe identity crisis. Without these things that I had come to depend on to make me feel valuable and important, I no longer knew who I was. In other words, it wasn’t just that I lost everything. Because my very identity was so deeply attached to those things—I lost myself. I felt like a 15-year-old desperately looking under every rock and behind every tree trying to “find himself” (except I was 42).