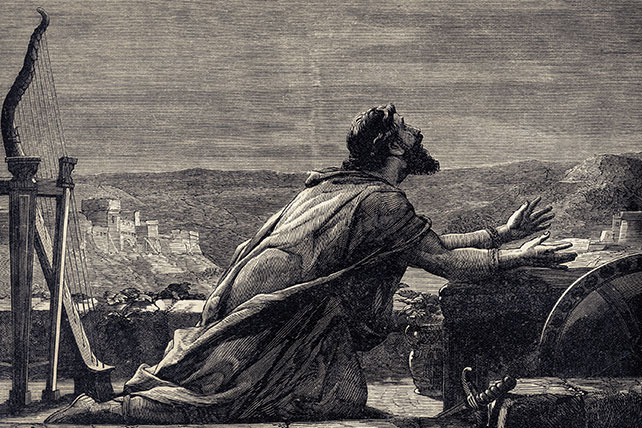 King David, the hero who killed tens of thousands of evil people, the worshipper who penned the most beautiful songs and chapters in the Bible, the man who was anointed by God to be the king of Israel, has become a momentary atheist.

I mean he had to, didn’t he? If he wasn’t going to repent right away.

He had just committed an unconscionable crime. He had taken Uriah’s wife Bathsheba and impregnated her, he had brought back Uriah, who was out at war and tried to convince him to go to Bathsheba so that he would think it was his baby. Then when Uriah refused, he sent a message to his general ordering the death of Uriah by Uriah’s own hand.

And then when Uriah had successfully been killed, what was he supposed to do? How would he live with himself? How could he continue to live in sin?

So, he says, “for the sword devours one as well as another”.

In other words, David is saying that God doesn’t exist. People die by the sword randomly and there is nothing that kings, generals or soldiers can do about it.

God is not sovereign!

This is typical talk for unbelievers but not for a writer of scripture.

I can’t think of anyone who believed in God’s sovereignty more than David!

He refused to lay a hand on Saul because he was God’s anointed!

He fearlessly confronted Goliath because he knew God was with him!

The Lord sat as King at the flood;
Yes, the Lord sits as King forever.

David clearly believes that God is sovereign over animals, forests and yes even humans numbered days. I mean he even declares God to be the king of the flood! Destroying everyone and everything on earth!

And yet, he becomes a momentary atheist.

I think this is an important reminder for all of us as we move into a new year.

We are all momentary atheists from time to time.

Of course, I do not believe in atheists. As Sye ten Bruggencate says, “I am an A-Atheist” meaning that there are no atheists, but the reason why people reject the God they know exists is because they love their sin and do not want to give it up. (Rom. 1:18

The fact of the matter is David knows better. And as much as he wants to lie to messengers, to his general or even to himself, he cannot ultimately suppress what he knows in his heart. That God exists and that He saw everything that occurred. Psalm 32:3-4

remind us of this,

When I kept silent about my sin, my body wasted away
Through my groaning all day long.
For day and night Your hand was heavy upon me;
My vitality was drained away as with the fever heat of summer.

Thankfully David repents eventually, (Psalm 51) but he would suffer for the rest of his life because of this sin.

We are constantly sinning. Hundreds of times a day.

We are constantly battling our flesh and our minds. When we sin, we are momentary Atheists or at the very least Deists. We are declaring with our actions that we either don’t believe that God can see what we are doing, or that if He can see, that He is not able to do anything about it.

As we look at our plans for 2021 out of our love for the Lord, we must make it a top priority to kill sin. And we must remember that in the moment of sin that our tendency will be to blame shift, minimize and perhaps even ignore the God that we know exists.

Like unbelievers who suppress God’s truth because of their love for sin, we too are not exempt. But in the Lord’s kindness because of the Holy Spirit, He is able to bring us to repentance and to acknowledge our momentary atheism.

May we always remember that God is the sovereign ruler of the universe, that nothing escapes His eyes, and may we, by His strength, repent quickly when our eyes drift away from our glorious and risen Savior.