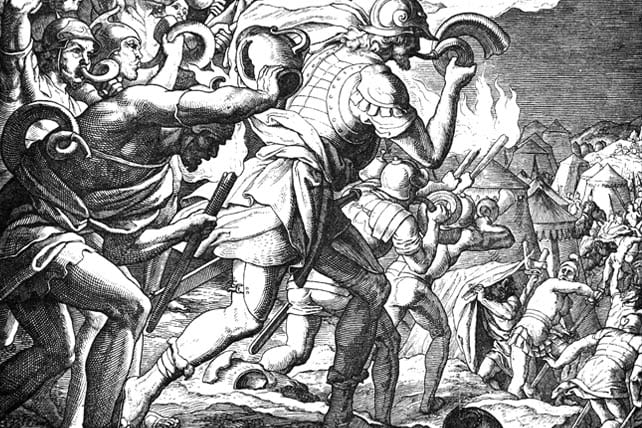 There is a constant danger that people face who are involved in ministry, and that is the thought that God needs us. Of course, we wouldn’t say it just like that, but we are often battling this thought whether we like it or not. And the truth is that God doesn’t need you.

Some might be tempted to think this more than others, perhaps young pastors like myself are more at danger to believe such a preposterous thing, but all of us, at least in our actions at times, scream out from time to time the statement, “God needs me!”

God doesn’t need you. Do you remember the story of Gideon and the 300 soldiers?

Spoiler alert for those who don’t remember it, the point of the story is that God doesn’t need you.

The story starts off with this man named Gideon. Gideon was a judge of Israel. He was a bit cowardly, though, and if he wasn’t cowardly, then he was at least doubtful.  He asked God to prove Himself to him through three miracles. God sent the angel of the Lord to shoot fire out of a rock to consume meat (Judges 6:21), he then gave Gideon two other miracles involving his famous fleece (Judges 6:36-40).

Then God sent him and 32,000 soldiers to defeat the Midianites. Who knows if even 32,000 men would be enough to battle Midian, but, as they got closer, the Lord told Gideon to send home anyone who was scared.

Left with ten thousand men, they kept on their mission and there were still too many.

The dog-like men were 300, and the normal humans were 9,700. Gideon was told to let the normal men go home.

The reason was simple–God said it, Himself, in Judges 7:2,

“You have too many men. I cannot deliver Midian into their hands, or Israel would boast against me, ‘My own strength has saved me.’ ”

God wanted Gideon, Israel, Midian, and the entire world to know one thing:  that He doesn’t need human beings to accomplish His mission.

Perhaps you need to be reminded of the fact that God doesn’t need you.

Too many times we work in our own strength, thinking that we can fix problems we are facing on our own. We rarely consult the Lord and ask Him for help.

Yet, this story should serve as a reminder that it isn’t even enough to “consult” Him. We must completely rely on Him. He is the sovereign One who controls the destiny of all things.

Gideon learned that so clearly that day.

The 300 men won the battle the next day without even the use of a sword. They just played some horn, smashed a few jars, and God took care of the rest.

Many men in ministry today think that God needs them. They arrogantly believe that the church can’t do without them. Perhaps some are even drowning in sin, and yet will not stop preaching because of this arrogant belief.

What will the church do without me? They might ask, forgetting that not even the gates of hell can prevail against the church.

Others value their wisdom so much that they rarely seek the advice of others. Without it ever dawning on them the fact that someone else might have a better idea. Soon prayer becomes an afterthought, I mean why do I need to pray if I have it all figured out?

Others, instead, lord it over their churches, and never allow others to have the ability to serve. Perhaps they are thinking to themselves that it is better that they do everything than to have someone else do something worse than they could.

All the while, priorities get out of whack, families are neglected, and the very One needed in order to accomplish anything in ministry–which is the Lord, Himself–takes a back seat in their hearts.

It is so easy to go down the path of self-importance, but nothing could be further from the truth. You must be constantly reminding yourself of the fact that God doesn’t need you.

This will then cause us to be thankful that the Lord of the universe, the One who holds all things in the palm of His hand, chooses to allow us to serve Him and to be used by Him.

Like so many years ago when God taught Gideon this valuable lesson, He wants you to know that He doesn’t need you at all, so don’t hold tightly to anything you have, but with joy serve Him knowing that it is all His.  Nothing spiritual can be accomplished without Him anyways.

This article about God doesn’t need you originally appeared here.