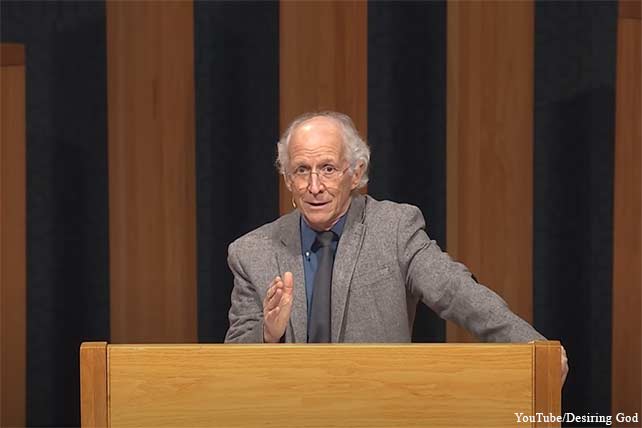 On John Piper’s “Ask Pastor John” podcast a listener asked the question, “Is there any hope that I will experience loving, godly, healthy intimacy in marriage?” after disclosing an addiction to pornographic videos that began when he was 10 years old.

The listener, Ben, explained the context for his question at length saying,

Beginning as a 10-year-old, I became addicted to porn videos. It was my primary battle for the next seven years. There have been wonderful victories along the way. But I also know these videos are unrealistic and perverse. God’s design for sex must be a lot different than what I’ve seen. But what I have seen is the only model I know. As I look forward to marriage, I fear that what I watched has already patterned my expectations. What advice do you have for me? Is there any hope that I will experience loving, godly, healthy intimacy in marriage? And what can I do now to ensure it?

The “Preparing for Marriage” author responded saying, “The answer is that there is hope for a loving, godly, healthy intimacy in marriage — if, in God’s mercy, a cluster of miracles happens in you and in your future wife.” The hope lies, Piper explained, within taking conscious steps that he and his future wife can take together, and a spirit-given subconscious transformation of one’s instincts. Piper said, “You must pursue these miracles.”

Pastor John suggested that women considering marriage should ask their future husband “point-blank” when was the last time he has looked at anything pornographic, and insist he has victory over it. Piper said, “Too many people today think that pornography is just inevitable; it’s a given, and marriages should just cope, just adapt to it. I think that’s like saying, “Poison is inevitable, and I’m just going to get used to taking poison.”

The theologian and former Bethlehem Baptist Senior Pastor gave his listener a path he could take that would lead him to the hope he asked was possible for his future marriage.

Humbling one’s self was the first thing Piper said he had to do. Seven year’s of “poisoning your mind” will have consequences that you are responsible for, Piper admitted. Citing 1 Corinthians 6:18-20 and 1 Corinthians 7:3, he explained that having sex with your wife is holy, unlike the sexual expectations manifested from watching pornography that have perversely distorted one’s brain. “Be holy” he said, “because you are bought to be holy and indwelt by the Holy One.”

Next Piper explained 1 Corinthians 7:3-4 and included the Apostle Paul’s words from Romans 12:10 which say, “Outdo one another in showing honor.” Relating the Romans passage to the marriage bed he said, “this means outdo one another in seeking to maximize each other’s pleasure — each other’s pleasure. Or another way to say it would be this: each of you strive to find your greatest sexual pleasure in the greatest sexual pleasure of your spouse.”

Piper advised that when Ben met someone he wants to marry, he will need to talk to his future wife “very frankly,” about the next part of the path towards hope, “about what pleases her.” Piper clarified this question “comes after the two of your are married,” because during your courtship “you will admit to her that you probably do not have the best instincts and inclinations when it comes to the most healthy ways of sexual intimacy in marriage.” This is so she can decide if you are worth the risk, because she knows the truth about your pornography addiction. “Don’t you dare hide this from her, spring it on her after you’re married, and know then that there’s no way out. That would be very disingenuous, dishonest, evil of you to do that,” he said.

Piper closed his answer by saying, “I think it would be fair to say that every mature, healthy woman in marriage wants to enjoy her husband and wants to be enjoyed by her husband, but not used by him.” He then gave three things that contribute to a woman not feeling “used” but feeling cherished instead: words, eye contact, and protecting the beautiful garden of pleasure.

Giving a brotherly charge to his listener Ben, he said, “pursue holiness and purity and deep transformation, and there will be hope for you.”

You can listen to the entire podcast here.