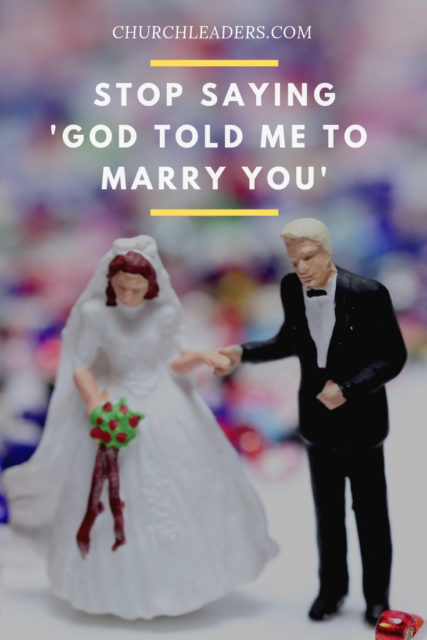 Does God make a practice of revealing to people who their future husband or wife will be? YouTuber Joseph Solomon says no.

“I know I’m going to get so much pushback,” says Solomon in the beginning of his video. “Listen, I get it…the girl is beautiful.” Or maybe a girl has a dream about a guy one night and takes that to be a word from the Lord. “I’m not saying that God doesn’t use dreams at all any more,” Solomon says. “I’m just saying the Bible doesn’t lead us to believe that that’s the primary way that we discern His will.”

What’s far more likely in these scenarios is that the people in question found someone interesting and let their natural attraction lead them to believe that God was giving them a special revelation.

What Does God’s Word Say?

Gary Thomas concurs that God does not specifically tell people whom they are supposed to marry. First and foremost, nothing in Scripture says that there is just one person God wants us to marry, nor does the Bible indicate that God is going to divinely reveal who a person’s future spouse will be. In fact, God’s word gives us the freedom to remain single if we choose. Our view on this matters, says Thomas, because “we have to own up to our choices—why we made them and how to be responsible in the face of them.” Then we can avoid blaming God for something He didn’t do.

The idea that God will bring “the one” we’re supposed to marry to us is often influenced by certain truths, like the fact that God is sovereign over our lives and that we should be eager to obey Him. Besides, who is there better to pick a spouse for us than God Himself? But Scripture mainly presents marriage as an area of life where we need to have good judgment. And while we often focus a great deal on how well we’re matched with a particular person before marriage, God’s word is far more concerned with how well we love that person after marriage.

Apart from the important question of how the Bible presents marriage, Solomon has a few other objections to people who say that God told them to marry someone else. One is simply that if you’re interested in someone, then someone else probably is as well–and if you both think God is telling you marry that person, you can’t both be right.

Another problem Solomon raises is that if the person you like hears that you think God has divinely matched the two of you, but isn’t interested, it can be incredibly awkward. “It’s one thing to say ‘I like this person,’” says Solomon. “It’s an entirely different thing to bring the God of Abraham, Isaac, and Jacob into the mix.” More than just being awkward, saying that your interest is a revelation from the Lord can make the other person feel like they’re disobeying God if he or she does not return your feelings.

Solomon’s third objection is that by incorrectly telling someone that God wants you to marry each other, you end up lying about God. Really, this is a danger any time Christians say God told them something that is not clearly specified in scripture. “Tread carefully with the ‘God told me’ rhetoric,” says Solomon.

Finally, by being foolish in this area, Christians can really get hurt when their false expectations don’t come to pass. “If you feel like God is leading you a certain way,” says Solomon, “then trust Him and wait.” But keep your belief private. If you do end up marrying that person, then you can share how God led you. If the relationship doesn’t work out, then you can learn from the experience and grow in your understanding of how God speaks to you.

After all, Solomon points out, more than anything else, God wants us to grow to be more like Him: “God’s biggest plan for you…is God!”