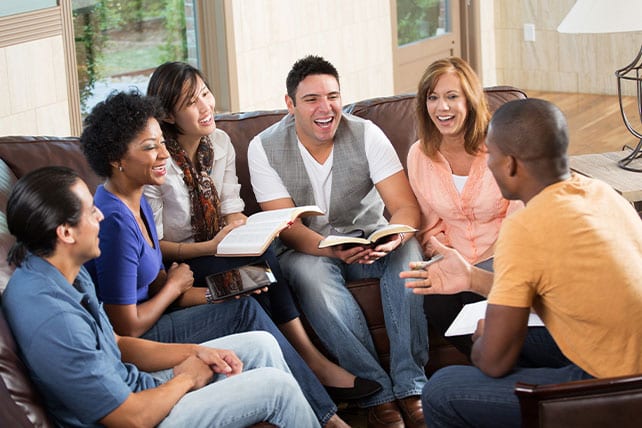 Groups who typically have 80 percent or more of their group members in a meeting on a regular basis are in their sweet spot. Even if their attendance occasionally dips below 50 percent, there really is not much to worry about. But there are two situations where you or your small group coaches need to intervene:

1. Groups with Too Many Members

Warm, welcoming groups can’t help but to grow. The members keep inviting their friends and in a matter of days to weeks, the group can grow well beyond what’s comfortable for a group meeting or even the average sized house. Rather than putting a cap on how many new people the group can invite, it’s time for a conversation. What’s next?

If the group is sub-grouping to smaller groups of eight or less, discussion can continue and everybody can get their word in. Sub-grouping paves the way for new groups to form potentially. But, I would not recommend using words like: birth, split, multiply or divide. These are code for “the small group pastor is only concerned about his/her own success and doesn’t truly care about people.” While small group pastors know that’s simply not true, the reality is our group leaders and members are wise to us.

The best way to get a group to multiply/divide/birth/split is to allow the size of the group to become a problem for the group. When they “feel the pain” of an oversized group, they will be more motivated to relocate some of the sub-groups to another house. Coach them toward this decision. Don’t dictate this, but guide them into something they will feel good about down the road.

For most small group leaders, especially new group leaders or hosts, a significant decline in attendance often feels like personal failure, even though it’s not. If they started with 14 and are now sitting in a cavernous living room with four people, they assume it’s their fault – maybe they’re just not cut out for this. But, we know better than that.

These group leaders need to know 100 percent small group attendance is not necessarily the goal. What we’re striving for is letting God work in the group. Sometimes God can’t do what he wants when 14 people are there, but He can when it’s only four. When attendance drops, leaders need to be reassured.

But if small group attendance drops and stays low, that’s whole other issue. What’s going on in the group that might be keeping people away? Are the meetings going to long? Is the leader unprepared? Is someone dominating the discussion and turning this into his/her personal support group? Not only is it time to coach the leader, it’s also time to conduct some “exit interviews” with group members who have left the group. This is not license for whining, but it could certainly give insight into what’s going on in the group.

The presence of a narcissist (read more here) or someone with a major life issue could certainly curtail the group’s effectiveness and ultimately its existence. Intervention by a group coach is essential to the group’s survival. Don’t hesitate to act.

If the group leader has gone silent, then the group coach needs to investigate. Maybe the group has stopped meeting. Maybe their attendance has dropped and they’re embarrassed to report (see above). If they miss one week of reporting, it’s probably no big deal. But missing multiple weeks should put the group on your hot list for follow up.

If groups aren’t reporting their attendance and leaders aren’t calling anybody back, either the group has failed or gone underground. While we live in a free country and people can gather and study whatever they want, there are some key advantages to staying connected to a group coach and a small group system (Article: Why Do I Need a Coach?)

Failure to take attendance is certainly only one indicator that a group may have “gone rogue.” This is not the time to evoke a strict, controlling approach to group oversight. Group coaching is built on relationship (Article: Why Small Group Coaching Fails). Encourage their small group coach to work on the personal relationship. In time, this will bring the group and its leader back in the fold.

Back in the day, the Sunday School superintendent left a folder in every classroom. The teacher would check off the attendance and put the folder outside of the door. Attendance was fairly easy to collect. But, collecting attendance from off-campus groups can be a little trickier.

Paper forms are probably not the solution, especially if they need to be mailed or dropped off at the church. Digital solutions are far superior. You can use a survey tool like Surveymonkey.com to send a simple survey to your group leaders asking them to list their members by name or just give a total for the week, add any prayer requests, and ask questions about group life.

A far superior solution is an online database such as churchteams.com which sends a report reminder after each group meeting. Leaders just need to click a link, fill out their report, click “save,” and then they’re done. Churchteams saves all of the data online and sends out analytics at the end of each month identifying potential trouble spots.

While there are many good reasons to take attendance in groups, there are also some negatives around record-keeping. While megachurches are often accused of being “only about the numbers,” it seems like others have a little number-envy going on themselves.

Small group pastors ask me, “Is weekly small group attendance really important?” While the small group pastor acknowledges those benefits, he or she soon confesses the pressure for attendance numbers is coming from outside – from a tote board-obsessed senior pastor. They don’t care who’s signed up for a group. They want to know on a weekly basis who’s actually attending the group. Here is why this recordkeeping might be a bad idea.

Groups are built on community around a Bible study. Classes are based on a course of study. If you skip too many classes, then you miss the content – the class is really of no benefit to you. But, a group is not a class.

Yes, there are group rosters. And, yes, attendance may vary. But, what happens not only during group meetings, but also in group life is what causes small groups to stand apart. Whether you attend the meeting or not, you’re a part of the group.

Years ago, we had a neighbor who attended our church and wanted to join our small group. She lived right around the corner, so our group was convenient for her. She also wanted her husband to attend  the group. He came once, but obviously didn’t want to be there.

They had busy lives, so rather than spending an evening apart with her at group and him at home, she opted to stay home as well, but we kept her on our roster. She never attended a meeting, but my wife would check in on her regularly, go for walks, and once in a while, she would show up for group.

She wasn’t a part of anybody else’s group. This was her group, whether she was there or not. Attendance records would report her as “inactive,” but we connected with her every week outside of the group meeting. See where record keeping can go a little haywire?

While it’s important to know over all how many people are connected to groups, ministries and classes, numbers should never be an end in themselves. What do those numbers mean? “Well, we have 80 percent in groups, so our small group pastor can keep his job.” “We’ve gone up and down with group attendance. Small groups aren’t working in our church.” That may be, but are you really getting the information you need?

How many leaders have you developed?

Every believer is called to “go and make disciples” (Matthew 28:19-20). There are no exemptions from the Great Commission. How are you empowering and equipping your members to gather a circle and make disciples? For many churches, an easy-to-use DVD curriculum is the answer. The person doesn’t need to be a leader or a Bible scholar. They just need to invite some friends. What makes this even better is if you create the video teaching yourself.

How’s the load of pastoral care?

When numbers go up, care goes down. I believe Pastor Rick Warren said that. This is why even though Saddleback Church has well over 25,000 in attendance, they also have well over 4,700 small groups.

A church will never be able to hire all of the staff it needs – mini-church or megachurch – it’s the same case for everybody. But, there are gifted people sitting in our pews every Sunday. If we encouraged them, and they said, “God use me,” we shouldn’t be surprised, but God uses them.

As people care for each other in groups, the need for pastoral care goes down. The Body is encouraging and serving one another.

Now, every church culture is a little different. Some church members are well trained in calling the church office for every little thing they need. Others simply feel out rightly entitled. But, when care goes up in groups, phone calls to the church office will go down.

How has assimilation improved?

When people start attending your church, how easy is it for them to make friends? How are they connecting? Groups are a great place for people to start.

In most churches, everyone can’t know everybody. But, everybody needs to know somebody. Statistically, that number is around 6-7 people. That’s all it takes for a person to stick. And, that sounds like a small group to me!

People who feel the connection and care of the church body outside of the Sunday morning service are more likely to stick around. A few months ago, our family started attending the Greenville, SC campus of NewSpring Church. Our kids where actually invited first and loved it. My oldest son would like to go to church twice per week!

My wife and I joined a small group – not because we had to – but because we were invited. Here’s the interesting thing – even though over 3,000 people attend the Greenville campus, we run into members of our small group on a regular basis. We just pick each other out of the crowd. There’s just something really great about seeing a smiling, familiar face in a large crowd. [Begin Cheers theme song…]

Other than our small group and our children’s teachers, we don’t know anybody else at NewSpring. We’ve never met our pastor. We don’t know the staff. But, we do know our group, and that’s all we really need.

If attendance supersedes relationship, then if you lose a member here or there, you just replace them to keep your numbers up. After all, if you’re posting numbers on a tote board, a decline is sending a bad message.

But, if relationship is valued over small group attendance, people will invest in each other and build into each others’ lives. Whether members are present at each meeting or not, they are loved, valued, encouraged and supported. These are harder things to measure, but are far more meaningful.