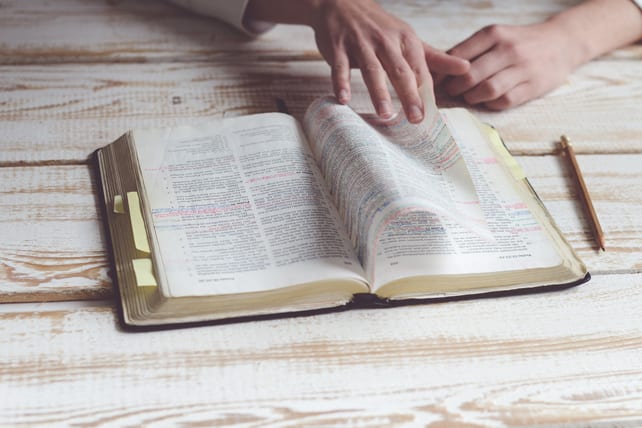 Every time we encounter the Bible, the Word of God, an unseen world of spiritual forces is at work. We don’t usually think about this, since our experience—for instance, reading the Bible or listening to a sermon—feels so patently mundane. But read Jesus’ first parable in Matthew 13 and you’ll gain a renewed sense of weightiness for the moment when our lives and God’s Word intersect.

“Consider the sower who went out to sow. As he sowed, some seed fell along the path, and the birds came and devoured them. Other seed fell on rocky ground where it didn’t have much soil, and it grew up quickly since the soil wasn’t deep. But when the sun came up, it was scorched, and since it had no root, it withered away. Other seed fell among thorns, and the thorns came up and choked it. Still other seed fell on good ground and produced fruit: some a hundred, some sixty, and some thirty times what was sown. Let anyone who has ears listen.” (Matthew 13:3-9 CSB)

Every time you encounter the Word of God, you bring one of four “hearts.”

The hard-hearted person may be interested in what the Word of God says—just not that much. If they come to church at all, they put the sermon out of their mind before they’ve reached the parking lot. Satan, like a bird, snatches away any thought that might be fruitful by filling their mind with doubts or distractions.

Most of the time, what distracts the hard-hearted isn’t something terrible. It’s simply something that takes your mind off of what God says. In our time, I’m convinced that distraction sends more people to hell than doubt.

Moses pleaded with the people of Israel not to take the Word of God lightly. “They are not meaningless words,” he said, “but they are your life” (Deuteronomy 32:47). We need the same reminder today.

The shallow-hearted person considers the Word of God and is initially moved by it. The problem is that whatever decision he makes doesn’t last very long. Because his roots don’t go very deep, the slightest difficulty makes the Word wither away.

I saw this illustrated vividly while working at youth camps. On the last night, there would always be a moving service where we’d ask students to make decisions for Christ. And of course, sleep-deprived teenagers are not known for being discrete with their emotional displays. It would usually start with one kid, who legitimately began to get convicted about what God was doing in her life. So she’d start to cry. Then this would spread to the guy and girl on either side of her, who didn’t know why they were crying. Within two minutes an entire row would be bawling. Sure enough, they’d all come forward to commit their lives to Christ. But a week later, for most of them, nothing changed.

This isn’t a problem unique to teenagers. They are simply a mirror to us of our own fickle hearts. What I’ve learned from years of leading people to Jesus is that many people aren’t responding to God but to a feeling. And when the feeling is gone, so is the commitment.

We need to be wary here. The proof of faith is not its intensity at the beginning but its endurance to the end. This doesn’t overturn the beautiful truth that “once saved, always saved,” which is clearly established throughout Scripture. But it should make us remember that how we finish in the Christian life is just as important as how we start. In other words, it is true that “once saved, always saved,” but it is also true that once saved, forever following.

The divided heart hears the Word and believes it. He wants to follow it. He really does. But then other things choke out the fruitfulness of that Word—specifically “the worries of this age” and the “deceitfulness of wealth.”

Here’s what that looks like in practice. You are genuinely interested in the Bible. When you read it, you immediately see its value. When you hear it preached, you experience the conviction of God. But as soon as you enter “real life” again, you are swept up with the bills you have to pay and the tasks you need to accomplish. Or you wake up in the morning, and you know it would be good to spend some time reading the Bible. But instead you scratch the itch of picking up your phone and checking social media. Before you know it, you’ve primed your mind with the worries of this age and any urgency for the Word is simply choked out.

People do not make conscious decisions to reject God as often as we might think. More often than not, God’s Word simply gets crowded out by things that seem more immediately important. But if we give the brambles an inch, they’ll take the whole garden.

According to Jesus, the one thing that sets apart the “open heart” is abundant fruitfulness. Seeds don’t produce 30 times what was sown, let alone 60 or 100. What Jesus is hinting at is nothing short of miraculous. When the Word of God really takes root in you, it produces fruit that can only come from God.

A good temperament might make you a decent person, but only the miraculous work of God can make you generous of spirit, excited in worship and forgiving of your enemies. If there is nothing in your life about which you (and others) can say, “Only God could have done that,” that’s cause for concern.

God’s words are powerful. It took just a handful of them to create the entire known universe. If those words are taking root in you, that same power will be at work in your life. I’m not saying you’ll overcome all of your sin immediately or easily. Nor am I saying you should compare your progress in the Christian life with others; after all, Jesus said the seed multiplies differently—30, 60 or 100-fold.

What I am saying is that the Word of God always bears fruit. If you’ve seen fruit in your own life, thank God for it and ask for more. And if you haven’t, there’s no better day than today to open up your heart to him.