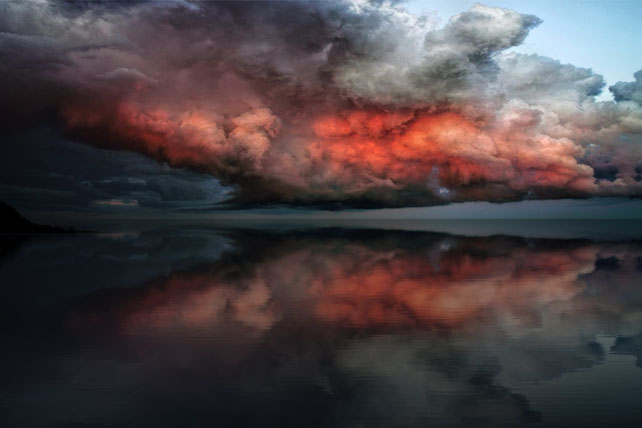 You Should Love the Wrath of God, Seriously

Do you love the wrath of God?

That sounds like a somewhat deranged question, right? I mean, when was the last time you had a conversation about how beautiful the wrath of God is? I don’t think I’ve ever had that conversation.

Have you ever read a book extolling the glorious virtues of the wrath of God? Survey says, “Probably not.” I certainly haven’t.

The simple truth is that we (myself included) don’t really like to talk about God’s wrath. It makes us moderately uncomfortable. It doesn’t jive well with our modern sensibilities. We prefer to talk about how God is loving, kind and merciful, all of which are gloriously true.

If you talk about God’s wrath on a regular basis, people start avoiding you at parties and giving you the distant side eye—the look that says, “Stay far away from this strange person.”

But it’s equally true that God is wrathful, and the wrath of God is just as glorious as his love and mercy.

Wait, what? The wrath of God is just as glorious and beautiful as God’s love?

Yes, it is. I know it sounds counterintuitive, but we should prize and treasure the wrath of God just as much as any other part of God’s character.

Here are three reasons why.

What Is the Wrath of God?

First, let’s make sure we’re all on the same page regarding the wrath of God. Depending on your background, you may have all kinds of unhelpful preconceived notions that keep you from truly treasuring God’s wrath.

So what is God’s wrath?

The wrath of God is God’s holy, righteous, absolutely morally pure opposition to and punishment of unrighteousness.

God is not like a semi-unhinged guy with a hair-trigger temper. He doesn’t randomly lash out when something happens that he doesn’t like.

No, God is gloriously holy and righteous. His wrath flows out of his holiness, obliterating all wickedness and leaving righteousness and justice in its wake. The wrath of God is just as steadfast as the love of God.

God’s overwhelming, glorious love for his people never changes, and his wrath against sin never changes as well. Both love and wrath are part of God’s immutable character.

1. The Wrath of God Means Justice Will Be Done

In its current state, the world is horribly, staggeringly, incredibly unjust. Every day, injustices occur by the millions. People sin against each other in horrific ways with seemingly little or no consequences.

Evil presses in all around us.

And if we didn’t know any better, we wouldn’t have any reason to believe that justice would ever be done.

This is exactly what Asaph experienced in Psalm 73. When he saw the prosperity of the wicked, he despaired.

Behold, these are the wicked; always at ease, they increase in riches. All in vain have I kept my heart clean and washed my hands in innocence (Psalm 73:12-13)

When Asaph surveyed the state of affairs, it seemed to him that the wicked always prospered, often at the expense of the righteous. However, when Asaph considered the end of the wicked, his perspective shifted. He knew that the wrath of God would soon fall upon the wicked. He knew that justice would be done and that righteousness would carry the day.

Truly you set them in slippery places; you make them fall to ruin. How they are destroyed in a moment, swept away utterly by terrors! (Psalm 73:18-19)

The wrath of God is a beautiful thing because it means that justice will be fully executed. Eventually, either in this life or the next, the wrath of God will be poured out on every form of injustice and wickedness and ungodliness. No sin will be left unpunished, no wicked deed ignored.

There is, indeed, justice for the oppressed and abused and downtrodden.

If you have been grievously sinned against, the wrath of God should be a great comfort to you. Hear these sweet words: God is just and vengeance belongs to him.

The wrath of God is a sweet, beautiful thing because it means that no sin will go unpunished and justice will be fully served.

2. The Wrath of God Means Satan Will Be Destroyed

Satan is the great enemy of God, standing in defiant opposition to all that is good in the world. In the Garden of Eden, he tempted Eve in an effort to ruin everything good that God created.

Now he prowls about the earth, inciting men and women to do all forms of horrendous evil. Satan delights in wickedness and does everything in his power to spread wickedness throughout the earth.

He also seeks to ruin Christians, tempting us to plunge into sin and abandon the God who loves us so deeply.

In Revelation 20:10, we read that Satan will be cast into a lake of fire and sulfur, which will be the end of him.

…and the devil who had deceived them was thrown into the lake of fire and sulfur where the beast and the false prophet were, and they will be tormented day and night forever and ever.

Aren’t you grateful for the wrath of God? If there were no wrath, there would be no destruction of Satan and no end to the misery and wickedness that he causes.

But praise God, Satan will soon be executed by the triumphant Son of God. In Genesis 3:15, the Lord said to Satan:

Revelation 20:10 is the fulfillment of this promise. Jesus will crush the head of Satan underneath his triumphant foot. The wrath of God is a beautiful thing because it means that Satan himself will be destroyed.

3. The Wrath of God Was Poured Out on Jesus

Always and only through Jesus Christ and his sacrifice on our behalf. The wrath of God is beautiful because it fell on Jesus and won’t fall on those who trust in him.

As 1 John 2:2 puts it, “[Jesus] is the propitiation for our sins, and not for ours only but also for the sins of the whole world.”

A propitiation is a sacrifice that turns away wrath. When he hung upon the cross, pulling ragged breaths into his tortured lungs, Jesus was experiencing the wrath of God for our sins.

The full fury of God’s judgment was hitting Christ like a freight train, eventually causing him to scream out, “My God, my God, why have you forsaken me?” Because Christ was swallowed by the wrath of God, there is no wrath left for any who hope in Christ. He is our propitiation, our wrath-bearing sacrifice, our rescuer and savior.

Without Christ, we are all lost. Doomed to be crushed by the wrath of God for our many sins against him. In Christ, there is sweet safety.

I’m reminded of the classic song “In Christ Alone,” which contains these sweet words:

If you have never believed in Christ, you should indeed be terrified of God’s wrath. It is a terrifying thing to fall into the hands of the living God. Run to Christ today. Hope in Christ alone for your salvation. Through him, you can escape the wrath to come.

If you do know Christ, you have every reason to savor the wrath of God. It truly is a beautiful thing.