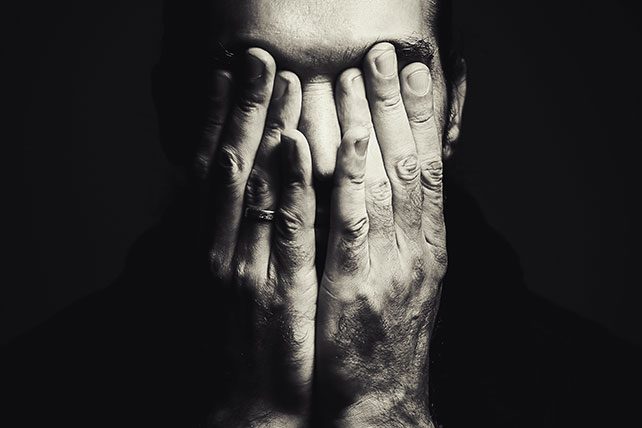 We men soothe ourselves with illusions of strength, with fantasies of control, with digital delusions. We daydream about becoming titans in our own world—respected, loved, honored, desired. But we’re often hurting…to the point that we’re destroying ourselves. Prayer for man has never been more important.

We men know we’re never going to have the physical strength of Superman. We’ll never be as debonair as Bruce Wayne. But most of us would choose to be an important villain instead of a sidelined extra and weak civilian. Part of us would choose to be Bane, or Lex Luther, who has a name, who has a role, whose purpose is forcibly impressed on the world, over a faceless innocent who needs to be rescued and whose story is never told.

We want to be the heroes of our own stories, and of the stories of others. For men in the 21st century—a time when heroism is measured by popularity and admiration, quantified publicly by social media followers—going viral is perceived as a more meaningful success than becoming virtuous; we gladly choose the fame that succeeds over the faith that needs.

The higher we climb this ladder—the deeper our devotion grows to this myth about being the beloved hero—the more devastating the consequences of failure. The more visceral and soul-destroying the consequences of remaining unrecognized. Body fat, minimum wage, no 401k, rejection by women, disapproval by older men, these are unbreakable shackles that chain us to our self-hatred.

Our wickedness breaks the illusion of our self-righteous control; our failures put boot to neck on our fantasies of strength. As men, we’re given every reason in the world to despise ourselves, and at the same time we’re supplied with every resource imaginable to distract ourselves from ourselves—distractions that ultimately push us deeper into our hatred.

Why We Need Prayer for Man

According to a recent large-scale study by the Centers for Disease Control, 78% of Americans who kill themselves are male. (Suicide is also the second-leading cause of death among Millennials.) Why are so many men killing themselves?

Peer-bullying is a leading cause of suicide among middle-school and high-school students. But we might assume that self-bullying is the leading cause of suicide among 20-something men. We’re slammed against a brick wall we have no idea how to handle: We feel like failures. Emotions take over. Despair sits like a stone in our stomachs, like concrete boots dragging us toward what feels like our inevitable end. “I’m not going to make it.” Dejection, laced with a fatal sense of our own wretchedness—of our own hate-worthiness: “Stupid.” “Ugly.” “Lazy.” “Idiot.”

Say This Prayer for Man With Me Now

Men, allow me to speak to God for us. Approach his throne with me—as aspiring heroes, as failures, as those tempted with the idea that a bullet is a greater relief than any grace God can provide:

Lord, you tell us one of the hardest things we could possibly hear: that we’re never forced to pull any trigger. Death beckons us only by intruding on our memory of your goodness:

“You have not remembered the Rock of your refuge…in a day of grief and incurable pain” (Isaiah 17:10–11).

Incurable pain. How could you possibly make our failures as men any more palatable? How could you break us free from the entangling distractions that numb us to the pain of those failures?

Are you unfamiliar with our rejection? Do you know what it’s like to know that if people watched our daily lives, our secret moments, they would write  about how we’re pathetic and immature “man-boys”?

“He was despised and rejected by men, a man of sorrows and acquainted with grief; and as one from whom men hide their faces he was despised, and we esteemed him not” (Isaiah 53:3).

“Surely he has borne our griefs and carried our sorrows; yet we esteemed him stricken, smitten by God and afflicted… Yet it was the will of the Lord to crush him; he has put him to grief” (Isaiah 53:4, 10).

You know what it’s like. But can you end my suffering? I need this pain, this despair, to stop. Can you somehow make it bearable? If I’m going to survive, I need my life to be better. I need to be loved. I need to find some solace.

“Out of the anguish of his soul he shall see and be satisfied… He bore the sin of many, and makes intercession for the transgressors” (Isaiah 53:11–12).

That feels so hard. Impossible, actually. Is that satisfaction you speak of real? Even if it’s real, is it attainable? Is there any defense against despair’s razor-sharp teeth quietly shredding my soul, draining my sense of purpose, telling me everyone would be better off without me? What could you possibly say? My realities are unresolved.

“‘Sing, O barren one, who did not bear; break forth into singing and cry aloud… For the Lord has called you like a wife deserted and grieved in spirit… For a brief moment I deserted you, but with great compassion I will gather you… I hid my face from you, but with everlasting love I will have compassion on you,’ says the Lord, your Redeemer” (Isaiah 54:1, 6–8).

“O afflicted one, storm-tossed and not comforted, behold, I will set your stones in antimony, and lay your foundations with sapphires… If anyone stirs up strife, it is not from me; whoever stirs up strife with you shall fall because of you” (Isaiah 54:11, 15).

But the voices are so loud. Everyone thinks I’m a failure. Everyone hates me. No one believes in me. Sin weighs heavy on me. Regret promises to haunt me forever.

“You shall refute every tongue that rises against you in judgment. This is the heritage of the servants of the Lord and their vindication from me, declares the Lord” (Isaiah 54:17).

What Does God Say?

Isaiah 53 ended. And Isaiah 54 is over. But the pain remains. Does your desire to end your suffering with suicide feel relentless? God is relentless. There is an Isaiah 55. And 56. And 66. And a crucifixion. And a resurrection. And a church that betrays and deserts God. And a church that God empowers and enlivens even after their despair. And then there’s more suffering. And then there’s more rest. And on and on. Life happens in seasons—sometimes seasons too long for us. But they’re not too long for God. This will pass.

Has it been years? You may be on your final lap. For every voice that comes against you, God comes against that voice. “You shall refute every tongue that rises against you in judgment.” No female or father could ever give you that power—they’re not evils; they were the wrong place to look to fight those voices to begin with. No fame or romantic acceptance or professional advancement can ever say to you in a way that addresses our existential pain, “I will have compassion on you,” and, “His vindication is on me.”

Stay here on earth with me. Our lives don’t have to be merely a series of failed attempts to be Bruce Wayne. Let’s work at Starbucks. Let’s take risks to serve God and neighbor that don’t perfectly pan out. Let’s make decisions that might make us losers in others’ eyes. But let’s live lives that hear what God says in our ear as he embraces us: “Well done, good and faithful servant.” Let’s seek sufficiency in that voice.

Let’s hold on to the only promise we can hold to: Life happens in seasons, and no matter what they look like or how long they last, God is fighting for us in the muck. He is fighting with us in the ugliness. He has passed through into the darkness with us. He will deliver us.