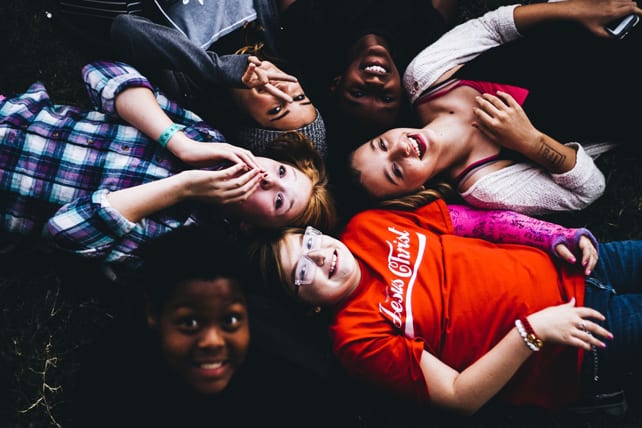 Most middle schoolers have not discovered what it means to be too cool for school yet. While there are always exceptions, most middle schoolers just want to have fun and have not determined that they are “above” whatever activity, game or message you are doing. They are able to cut loose and have fun even if it involves a silly, crazy or messy game.

They love the attention of adult leaders and don’t jump straight to judging the leader’s coolness as a determining factor of whether or not they can hang out with them. Middle schoolers are willing to try new things, and for the most part, being cool is not their main concern.

For some this may be considered a bad thing but it can be used in an amazing way! There is always fun and energy in the room; students are never too tired or blah to do activities and have fun. As a leader, you can sell anything as awesome (no matter how terrible of a game it is) as long as you hype it up. Their mass amounts of energy, when properly directed and reigned in is one of their best characteristics.

Middle schoolers will listen and take what you have to say. They are at a very impressionable time in their life and could either dive deep into following Jesus or walk completely away. It is amazing that we get to speak into their life at this stage and make an impact for the rest of their life because of how impressionable they are.

4. In between kid and young adult

They are at such a unique place in their life. They are not kids and are starting to gain some freedom, but they are also still very dependent on adults. Because of their dependence, they will listen to adults. They are in the middle (appropriately named) and really get the best of both worlds from childhood and young adulthood.

Everything you do at youth group for a middle schooler is amazing because it is all new to them. Most high schoolers have already sat through it for years and are difficult to impress whereas middle schoolers are seeing it for the first time. When you pull out an old classic game, it’s fresh and new to them. When you tell them same old tired joke, it’s fresh and new to them. When you do something ridiculous or dress up crazy, it is still funny because they haven’t seen it 100 times yet.

While this sounds incredibly negative, let me explain. Middle schoolers have short memories of their bad experiences and tend not to hold grudges. For example, if you play a game that totally flops and no one has fun, it probably won’t stop them from wanting to come back to youth group the following week. If they get in trouble for their behavior, they will probably still be back the next week. They are not going to hold that game or disciplinary action against you and immediately label youth group as boring or mean. Whereas high schoolers are more prone to hold onto those things.

Middle schoolers tend to be a little less busy than most high schoolers. They usually have more time available for youth groups, events, camps and retreats. They don’t have jobs yet, and their social opportunities are more limited so youth group is more of a priority. They are a less complicated group to plan for and be able to reach out to.

Of course students of all ages have potential, but middle schoolers are at the very beginning. It has been said, “You grow the culture of your high school ministry though your middle school ministry” and it is so true. Middle schoolers have mass amounts of potential for the high school ministry, college ministry, church in general, and with the impact they can have on the world around them. Because of all of the factors we have already pointed out (not too cool, willing to take risks, time, etc.) they can radically change their world, and that is awesome!

While all student ministry comes with the element of the unexpected, middle schoolers seem to constantly keep you on your toes. You never know what might happen, what they might say or do. Some of the funniest experiences, stories and completely unbelievable situations come from middle schoolers and that is awesome!

So when your middle school ministry makes you feel like pulling your hair out, just remember these 10 reasons why they are awesome!