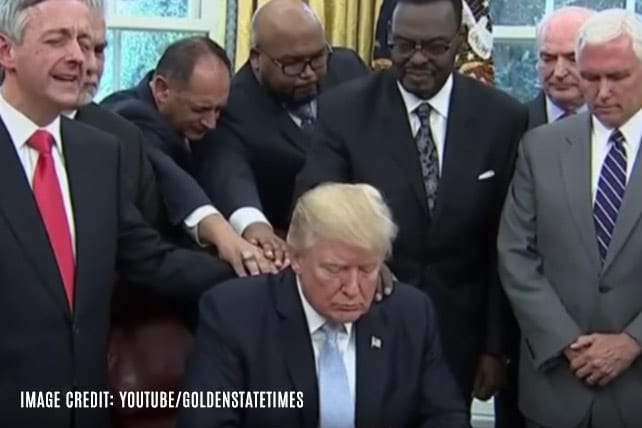 For the past two years Barna has released a compendium of surveys from the previous year to shed light on our complex and changing world.

In one section of Barna Trends 2018, the researcher wanted to know if Americans trusted President Donald Trump and if they were praying for him just a few months into his presidency.

The surveys were taken in mid-2017, at a time when more than 9 out of 10 stories about the president from the mainstream media were negative. Also, the authors admit that the political climate and the news cycle shift frequently and rapidly. These findings reveal some interesting trends at a specific moment in time.

Barna found a plurality of Americans believe Trump’s performance was poor or worse than expected (57 percent).

Evangelicals were the only faith group whose responses about the Trump presidency were positive, saying it had been “great” (54 percent).

White Americans most approved of Trump, saying he was doing a “great job” or “better than expected” (35 percent).

Those feeble numbers, across the board, also translated into a lack of trust in the new president.

Praying for Those in Authority

While most Americans did not approve of Trump’s performance or put much trust in his ability, a majority (63 percent) also said they were not praying for him.

Evangelicals were the most likely to pray for Trump (88 percent) followed by practicing Christians (69 percent) and active church attenders (60 percent).

Despite their low approval of Trump, and perhaps evidence of their faith in the face of adversity, black Americans were almost as likely as whites to pray for the president (41 percent and 44 percent respectively).

Regardless of affiliation, Barna found an active faith increased the chance that someone prayed for Trump.

Can the Church Step Into the Divide?

The trends throughout the year also reveal the deep political divide facing the nation. Can the church help repair the schism?

The Pollsters asked Batterson how he leads and unites his congregation without shying away from complex issues.

“We made a decision on day one that we would strive to be nonpartisan. In other words, we don’t endorse candidates or parties. Galatians says there is neither Jew nor Greek, slave nor free, male nor female in Christ. We add Democrat nor Republican to the list. But we’re not afraid of tackling tough issues that may be perceived as leaning right or left. For example, we believe it’s our biblical mandate to care for refugees. We have not publicly commented on the policies related to that issue, and honestly some of those things are past my pay grade. But we have 250 people on our refugee care team, and we’re actively making a difference in the metro D.C. area on that front.”

Barna’s data show Christians, especially evangelicals, have a hard time talking to people who are unlike them and asked Batterson how pastors can better address difficult topics and help Christians overcome their conversational barriers.

“Let’s be honest: If you have a good friend who is gay, you approach that “issue” differently because it’s not an “issue” anymore; it’s a person. It doesn’t have to change your theology, but it will change your heart.”

“We challenge people to be friends with those who have a different skin color, political affiliation or sexual orientation. And it’s not about having an “agenda” for them; our agenda is love. Sure, love is truth. We want others to be transformed by the truth, just like we need to be. But it’s more about asking questions than offering answers. I believe the key to any healthy relationship is grace and truth. Grace means I’ll love you no matter what. Truth means I’ll be honest no matter what. The combination of grace and truth makes for transformation.”

If there are lessons to be learned for the church from Barna polling in 2017 it might be these: Prayer for our leaders is crucial; our trust is misplaced if it is not in our Savior; and love can overcome any divide, even the political kind.