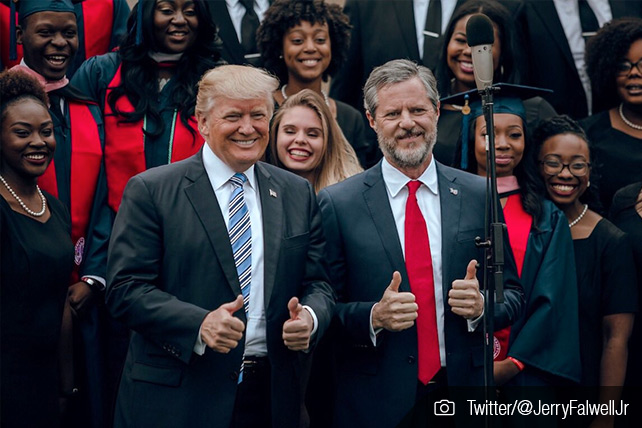 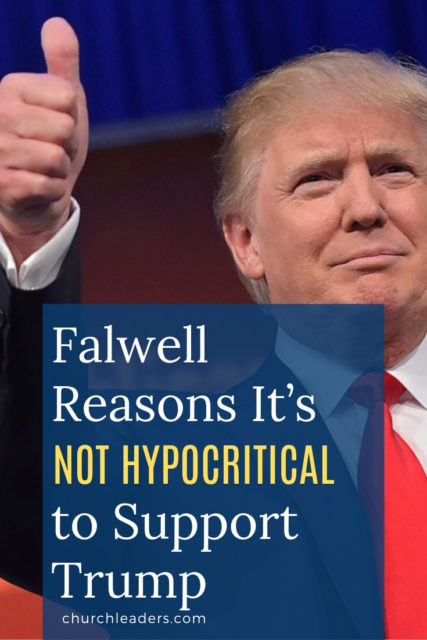 In a recent interview with The Washington Post, Jerry Falwell Jr. explained why he persists in supporting President Trump, despite behavior that many would argue directly opposes the teachings of Christianity. Falwell is the president of Liberty University, a conservative Christian college in Lynchburg, Virginia. He also explained why many evangelicals support Trump.

When asked why he and other Christian evangelicals stand behind Trump, Falwell responded,

What earns him my support is his business acumen. Our country was so deep in debt and so mismanaged by career politicians that we needed someone who was not a career politician, but someone who’d been successful in business to run the country like a business. That’s the reason I supported him.

Falwell’s philosophy regarding what to look for in a political leader is key to understanding why he is unwavering in his support of Trump. Falwell believes that the commands Jesus gave his followers were personal commands for them and not ones people should impose on a nation or system of government: “It’s such a distortion of the teachings of Jesus to say that what he taught us to do personally—to love our neighbors as ourselves, help the poor—can somehow be imputed on a nation. Jesus never told Caesar how to run Rome.”

Another reason Falwell is willing to back Trump without feeling hypocritical is because he believes all people have some moral failures and it’s not possible to know every single flaw people have before electing them. Falwell reasons that if we choose leaders based on how good we think they are, it’s possible we’ll eventually find out about something immoral in their lives, thus negating our reasons for voting for them. “So you don’t choose a president based on how good they are,” he says, “you choose a president based on what their policies are.”

According to Falwell’s reasoning, it follows that there is no inconsistency involved in a Christian supporting someone who lies and commits adultery. In fact, Falwell argues that, far from being immoral, it’s actually moral to support Trump because the president has brought his business savvy to how he runs the government and has increased jobs for minorities.

This way of thinking might explain why a majority of white evangelical Christians still back Trump, despite the controversies that surround him. According to a study from the Public Religion Research Institute, 72 percent of white evangelical Protestants approve of Trump. In contrast, other religious and ethnic demographics either see him negatively or are more evenly divided.

Not all white evangelicals support Trump, of course, and even those who do don’t necessarily agree with everything he does. In fact, some evangelical leaders have voiced criticism of the candidate-turned-president and have been on the receiving end of Trump’s ire. But evangelical support for Trump is strong overall. For those who have wondered if there is anything that Trump could do to alienate this particular base, the answer seems to be no. That was the answer that Falwell gave to The Washington Post. He says this because, “I know that he only wants what’s best for this country, and I know anything he does, it may not be ideologically ‘conservative,’ but it’s going to be what’s best for this country.”