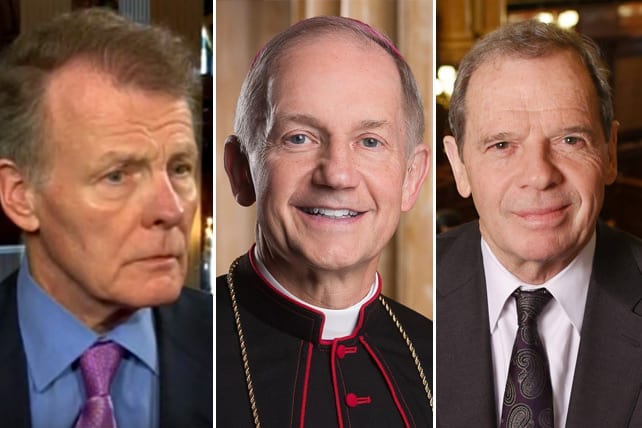 Thomas Paprocki, Bishop of Springfield, Illinois, has banned Illinois Senate President John Cullerton and Speaker of the House Michael Madigan from taking Holy Communion. According to Paprocki,  because the men have been instrumental in pushing Illinois’ new abortion legislation, they cannot be in good standing with the Catholic church and therefore must be banned from the Eucharist.

“They have obstinately persisted in promoting the abominable crime and very grave sin of abortion as evidenced by the influence they exerted in their leadership roles,” reads the statement, which was issued on June 2nd. It was signed by Paprocki, as well as by the Very Reverend Christopher A. House, V.J. Chancellor of the Diocese of Springfield.

The statement goes on to say that Madigan and Cullerton will be allowed to take communion again “only after they have truly repented these grave sins and furthermore have made suitable reparation for damages and scandal, or at least have seriously promised to do so.” The statement also says that any member of the Illinois legislature who has supported abortion should not take communion “without first being reconciled to Christ and the Church.”

In an interview with LifeSite News, Paprocki explained that he felt compelled to issue the prohibition for a number of reasons. One was to “protect the integrity of our sacraments and the clarity of our faith.” To promote what some say is most the permissive legislation on abortion in the nation blatantly opposes the Church’s teaching that abortion is immoral. Paprocki is concerned about the legislators’ salvation and is also worried about the conclusions people might draw if the Catholic church tolerates such actions from self-identifying Catholics. “I just felt an obligation or responsibility to respond to what was going on,” said Paprocki.

Paprocki said he spoke with Madigan “on a couple of occasions” about his concerns and that he also contacted Cullerton’s office, but the senator did not return Paprocki’s calls. After the voting on the bill took place, the bishop sent each man a copy of his statement.

Paprocki emphasized that the church is not singling out abortion as the only sin that would prevent someone from taking the Eucharist. Another purpose of his ban is simply to remind any person “in seriously sinful situations,” whether in Illinois or anywhere else, that they should not be taking the sacrament of communion. “It would be the same thing for a person who is divorced and remarried without an annulment, for example, or a couple that’s cohabiting and they’re not married,” he said. While Paprocki said he’s not singling out abortion as a special sin, he does believe it is a defining moral issue of our time, similar to that of slavery in the 19th century.

For the legislators to be allowed back into good standing with the church, Paprocki said that apologizing would not be sufficient. Rather, Madigan and Cullerton would have to take meaningful steps, such as “introduce a new bill, or somehow make some legislative effort to have these abortion bills then overturned or repealed.” Paprocki gave the example of someone stealing a million dollars. It would not be good enough, he argued, for the person to say, “I’m sorry,” but then keep the money. “And so similarly here,” he said. “If you’re really sorry about your abortion votes, then you have an obligation, I would argue, to do something to reverse that.”

LifeSite asked Paprocki how he would respond to those who might claim that the Catholic church has no moral authority to call others to account because of its failures to protect children from sexual abuse. In response, the bishop compared the situation to the responsibility all parents have to discipline their children. When a parent sins, said Paprocki, to say that sin stops him or her from being a parent “would be really abdicating the role of the parent.” Instead, he said, “a parent should indeed confront his or her own sinfulness and correct it, but at the same time, has a responsibility to the proper moral instruction to their children.” So while the Catholic church needs to acknowledge and deal with its sins, Paporicki believes it should not remain silent about other evils.

The bill that Illinois has just passed has been called “more extreme” even than New York’s recent abortion legislation. According to CBN, Illinois’ law allows abortion up until the moment of birth and requires all insurance providers to cover abortions. It allows no exemptions for religious organizations. LifeSite reports that the bill permits “non-doctors to commit abortions, and [eliminates] protections for babies born during botched abortions. It eliminates requirements to investigate fetal deaths or maternal deaths resulting from abortion.”

It also establishes that women have a “fundamental right” to abortion and that a fetus has no independent rights. Another change is the new law requires parents to pay for abortions, even if their underage children get one without parental consent. The Chicago Tribune also reports that the law removes a requirement for spousal consent.

Opponents of the bill have grave concerns over how the law will be interpreted. Speaking before the General Assembly before the bill was passed, Illinois state representative Avery Bourne said, “This bill will mean that if a baby requires extraordinary medical measures after they’re born, doctors could determine up to the 40th week of pregnancy that that baby was never viable because it had to be flown to the NICU after it was born.” Therefore, said Bourne, “if the baby is viable, a doctor can determine that the post-viable abortion can still take place.”

‘Children Are a Gift’

The Eucharist is an extremely important sacrament within the Catholic church, so to ban someone from taking it is significant. In a press release about his statement, Bishop Paprocki said,

Christians have rejected the practice of abortion from the earliest days of the Church. Children are a gift from God, no matter the circumstances of their conception. They not only have a right to life, but we as a society have a moral obligation to protect them from harm. Legislation that deprives children of legal protection before they are born, allowing for the murder of children at any stage in the womb, even up to the moment of birth, is evil.