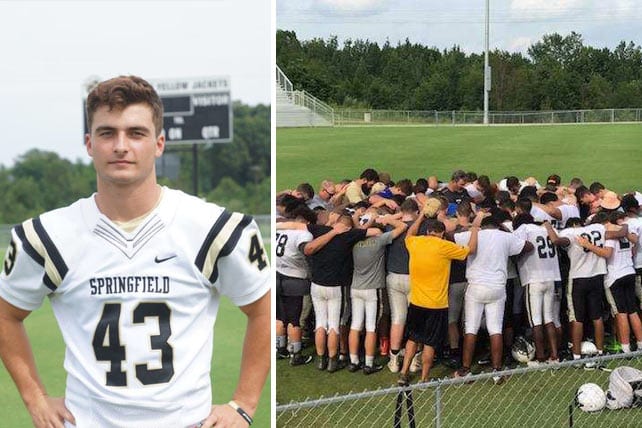 A school district in Tennessee is under fire because two of its students were baptized on school property after football practice on August 7th. The Freedom From Religion Foundation (FFRF) has accused Springfield High School and Robertson County Schools of violating the Constitution and has sent the district a list of steps to take in order to ensure it will not do so again.

“It is inappropriate for a public school district to proselytize students by praying with students, baptizing students, or employing an outside religious leader to organize these activities,” said Chris Line, staff attorney for FFRF. “This is especially problematic in the context of athletics, given the coercive pressure players feel to conform to coaches’ expectations so as not to disappoint coaches or hurt their standing on the team.”

The baptisms became public knowledge because of some tweets from people who were there.

“Great day for two young men being baptized in front of our team and our field. Better than winning any game or any trophy,” said Jeff Buttram, Director of Strength and Conditioning at Springfield High School.

Character coach Chad A. Diehl also posted a tweet to his personal account about the blessing it was to baptize the two young men “in front of their football brothers.”

What a blessing it was to baptize these young men @MikieNeal, @haley today in front of their football brothers. #sptbrand, #kingdombuilding, #family, #linkup pic.twitter.com/4WVJ4FlJwQ

But now Robertson County Schools is facing a formal complaint from the FFRF. The Tennessean reports that in a letter dated September 5th, the FFRF accused the district of “promoting and endorsing religion to students” and thereby breaking the law. In a news release dated September 10th, the FFRF says it was alerted to the incident by a “concerned area resident,” and FFRF Co-President Annie Laurie Gaylor stated, “The involvement of a public school coach in baptisms is so over the top as to be ludicrous. You’d be hard-pressed to cite a display of sectarian religiosity more blatant than this.”

In a statement, the district said that the student baptisms did not break any laws: “Specifically, the activities … were student initiated, student led, and occurred after the practice session had ended, and after school hours. All participation was voluntary with no requirement for attendance either stated or implied.” Moreover, the district did not promote the baptisms, nor does it employ Diehl, who performed them. Diehl is a student minister at Bethlehem Baptist Church and volunteers at Springfield High.

While there is plenty of outrage about the baptisms from people who are following the story on FFRF’s Facebook page, there has been far less pushback from residents of Springfield. News Channel 5 Nashville reports that the high school only received a few direct complaints and that it only received them after the FFRF got involved. The person responsible for involving the FFRF seems to have reached out to the organization directly, and it is not clear whether he or she contacted the East Tennessee chapter in Knoxville, Tennessee, or the FFRF’s national headquarters in Madison, Wisconsin.

Robertson County Director of Schools Chris Causey told The Tennessean that the district has not received any direct complaints about the incident. He said, “We have not received a single phone call from anyone asking us about (these baptisms). Zero. If we have concerned parents or community members, I would think they would need to contact the district office about it instead of turning to organizations that aren’t even based in Tennessee.”

Chris Line says that the FFRF is prepared to take legal action against the school district if there is no response or resolution to the FFRF’s demands.