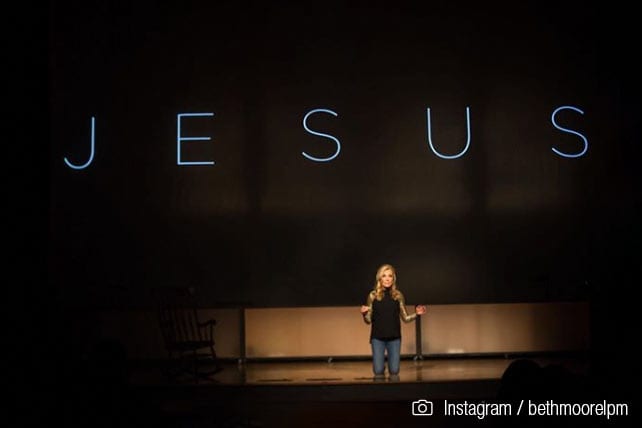 At the Southern Baptist Convention’s Caring Well Conference, author and speaker Beth Moore addressed a question on the minds of many: Does complementarian theology lend itself to misogyny and abuse? According to Moore, the problem is not in the soundness of complementarian theology, but rather the elevation of this thinking to be on par with the hallmark of Southern Baptist belief—that of biblical inerrancy.

Beth Moore speaking at the Caring Well conference. Excellent clip on the question: “Does complementarianism cause abuse?”

What Problems Are We Witnessing With Complementarianism?

Moore gave evidence for her point that complementarianism has become closely associated with a belief in the Bible’s inerrancy by pointing to the convention’s association of egalitarianism with liberalism concerning Scripture. “Notice how often our [SBC] world charges or dismisses egalitarians by saying they have a low view of Scripture,” she said.

Another way we the convention goes wrong is in its tendency not to appoint women to “visible areas of leadership.” There are so few women in these positions, Moore argues, that when women are being abused within the church by someone in authority, oftentimes they “don’t even have a woman to turn to.” These women “don’t know where to go,” Moore says.

In fact, Moore fears the SBC has created a culture where the shepherds watch out for other shepherds before they will watch out for a member of the flock. She also sees the need to help the sheep “learn how to smell a wolf.”

Moore implies that not only does classic grooming for sexual predation occur in SBC settings, but there is also a “secondary kind of grooming” prevalent in the SBC. There exists an unwritten rule that instructs sheep “Not to question those in high position.” In contrast, Moore argues that if a leader cannot be questioned, they also cannot be trusted.

A Hard Pill to Swallow

Recognizing her words may be a hard to pill to swallow for some, Moore implies those who love the church should be the ones to speak first. She gave the example of Paul writing a note of correction in his letter to the Galatians in chapter 4. “Have I now become your enemy by telling you the truth?” he asks. So too is Moore (and the other men and women leading the charge for reform in the SBC) asking this question of the convention.

This “moment” (a collective waking up of the church to the abuse that has gone on for decades within its walls, sometimes perpetrated by its leaders) has been “divinely entrusted to us,” Moore argues. “If we are cowards,” she warns, “the generation coming up behind us will either despise us or be like us.” In other words, this is a moment the current leaders and elders of the SBC need to steward well.

To put things succinctly, Moore uses an analogy: “If complementarianism were a woman, that woman is being abused and somebody needs to call the police and start an investigation.” She adds, “And God help us if the police are in on it.” In her quintessential style, Moore took the opportunity to sprinkle in a candid joke that both alluded to the criticism she has faced lately for speaking up and also hinted at the severity of the situation. “I guess now I will enter the witness protection program,” she said. The audience erupted in cheers (mostly from women) when Moore said this.

Interestingly, author Jen Wilkin spoke at the SBC’s Southeastern Seminary chapel service on Thursday. Again, the topic of complementarianism came up. Wilkin, who is the Director of Classes and Curriculum at The Village Church in the Dallas, Texas area, addressed some of the problems that have been wrongly placed on the role of women in complementarian churches.

Her words at the chapel service suggest, as Moore suggested, complementarian theology has been hijacked to some degree.

Wilkin said there is a mindset that says the gifts God gives women are “nice but not necessary.” Explaining how this mindset is wrong, Wilkin says “God does not give needless gifts.” By God’s design, the gifts he gives women are “essential and indispensable.”