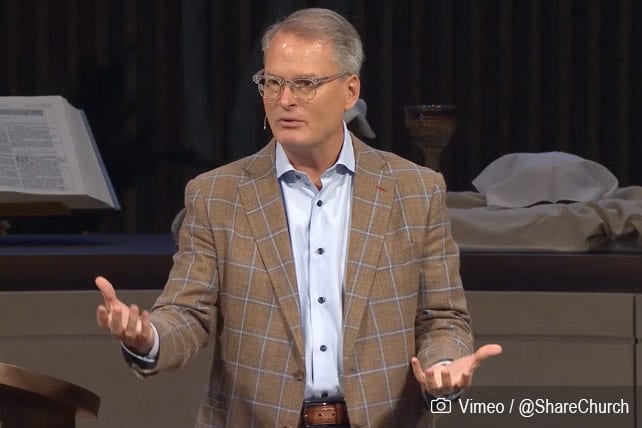 Pastor Adam Hamilton makes no secret of the fact that the United Methodist Church’s decision earlier this year to affirm traditional marriage and to forbid gay clergy and same-sex weddings, doesn’t sit well with him or his church. At a leadership conference for UMC ministers, Hamilton took a guess that between 3,400 and 7,500 churches across the U.S. will leave the UMC by this time next year. Still, Hamilton is hopeful the denomination can hold itself together by being a mixture of both conservative and liberal.

“If we’re conservative without being liberal, we’re stuck, and if we’re liberal without being conservative, we’re unmoored,” Hamilton told the group of leaders at his Church of the Resurrection in Leawood, Kansas.

Can a Church Be Both Conservative and Liberal?

Hamilton explained what he meant by the words conservative and liberal:

To be conservative means there are certain things that are true and they’re always going to be true and you conserve those treasures–the manifold treasures of God. You hold on to those things and you continue to preach and teach them even if they’re not popular or cool anymore…To be liberal means to be generous in spirit, open to reform, willing to see things in new ways today that I didn’t see them yesterday…constantly growing.

For Hamilton, achieving a balance like this in a church resembles the very nature of Christian faith. Faith, he explained, “holds together the head and the heart and that holds together evangelism and social justice, personal piety and at the same time social holiness.” In other words, the Christian faith holds seemingly opposite things together, sometimes in tension. As an example, Hamilton says his church has Republicans and Democrats among its membership. “we have people running for the same office against each other and they’re members of the same congregation.” While there is an obvious tension present in that example, Hamilton said at the same time “there’s something beautiful about that.”

Using the example of his two daughters, who are inherently very different, Hamilton says God sees us all as being very different but loving us the same. For instance, he explained, one of his daughters is very driven, “quiet and cerebral.” This daughter finished college in three years and went on to law school. Hamilton’s other daughter is “a free spirit” with tattoos. She took six years to finish college, Hamilton said. Yet, the pastor says he loves them both. “And I don’t love one of them more than the other.” In the same way, Hamiliton believes God looks at the church (and the diversity in the church) and feels the same way.

Indeed, this example of diversity (specifically diversity in political thought) was on display in Jesus’ disciples. Hamilton points out that Matthew the tax collector was working for the Romans while Simon the Zealot was willing to use violence to get rid of the Romans. They were both convinced the other one was absolutely wrong. And yet, Jesus called them both to be his disciples. This kind of tension within unity requires us to practice a little humility when it comes to our relationship with other human beings, Hamilton emphasized.

What Does the Future Hold for the UMC?

Both the vote and the years of debate leading up to the vote caused much division in the U.S.’s second largest Protestant denomination. However, Hamilton believes the UMC needs to refocus itself and embrace its reputation as a diverse denomination. His hope that liberals and conservatives (theologically, politically, etc.) can come together under the tent of the UMC to be an effective church movement.

As Hamilton mentioned in his message to leaders, there are currently 34,000 UMC congregations in the U.S. His “guess” is that by this time next year, roughly 10 to 20 percent of the more conservative churches that agree with the Traditional Plan will leave the denomination due to the ongoing debate over the Book of Discipline wording. This would account for between 3,400 and 6,800 churches. As far as the more liberal-leaning congregations, Hamilton thinks one to three percent (300 to 1,000) of these will leave. Hamilton says he is basing these predictions on surveys.

While he offered these numbers as guesses, Hamilton made this point unequivocally: The Book of Discipline will change. “We are going to remove from the Book of Discipline the language that is harmful to human beings, the policies that are continuing to bring harm to the LGBTQ community, their family and their friends,” he stated.

Additionally, Hamilton is convinced the way forward for those who remain in the denomination is not going to be easy, even when they succeed in changing the wording in the Book of Discipline to include LGBTQ people. Just changing the wording “will not change things overnight toward an inclusive church,” he explained. He gave the example of when the UMC allowed for the ordination of women and how some congregations did not readily embrace female clergy. “We can change a book, but in the end we have to change hearts,” he said.

Leaders especially are going to find the way forward hard, Hamilton said, since they are going to be the ones trying to hold diverse congregations together while also receiving the brunt of the criticism from those on either side who may not be happy with the denomination’s decision.