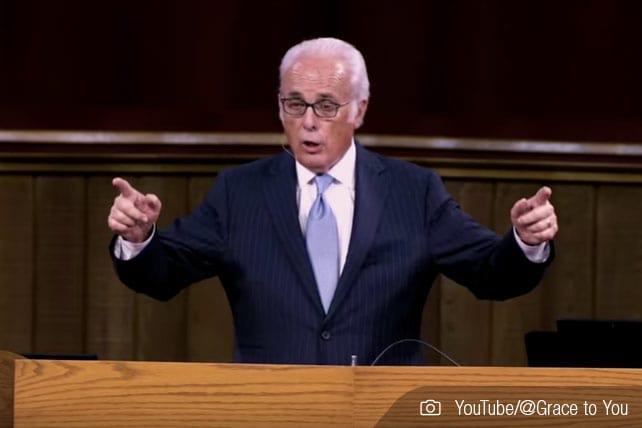 You have likely heard of the recent controversy surrounding John MacArthur and Beth Moore over the issue of whether there should be female preachers in the church. Several weeks after telling Moore to, “Go home,” at the Truth Matters Conference, MacArthur revisited the issue, preaching a sermon called “Does the Bible Permit a Woman to Preach?” again referring specifically to Moore.

“Today, I want to address a very important issue that has been stirred up on the internet with me kind of in the middle of it,” MacArthur said as started his sermon. He went on to say he thought his congregation might find it “shocking” how many people in the U.S. are comfortable with female preachers, adding,  “Perhaps women pastors and women preachers are the most obvious evidence of churches rebelling against the Bible.”

MacArthur decided to address the issue of female preachers in a sermon (which was over an hour long) because he wanted to give a thorough answer from Scripture about what God’s Word teaches on the topic. He began his case by reading 1 Cor. 14:33-38, which says,

For God is not a God of disorder but of peace—as in all the congregations of the Lord’s people. Women should remain silent in the churches. They are not allowed to speak, but must be in submission, as the law says. If they want to inquire about something, they should ask their own husbands at home; for it is disgraceful for a woman to speak in the church. Or did the word of God originate with you? Or are you the only people it has reached? If anyone thinks they are a prophet or otherwise gifted by the Spirit, let them acknowledge that what I am writing to you is the Lord’s command. But if anyone ignores this, they will themselves be ignored.

MacArthur emphasized the word “disgraceful” in verse 35, saying it can also be translated as “shameful.” He cited other passages from the New Testament to illustrate why the prohibition against female preachers is universal within the church.

When women want to teach men in the church, they are rebelling against God’s clear command, said MacArthur, rebellion which is rooted in Eve’s rebellion against Adam’s leadership in Gen. 3. When God punished the man and woman for their sin, God told the woman in Gen. 3:16, “Your desire will be for your husband, and he will rule over you.” MacArthur then asked the church members, “What is this desire of the woman that forces the husband to have to dominate her?” It is the desire to usurp his authority. And this desire to take over male authority is something MacArthur sees as rampant not only in the church with female preachers, but also in society.

MacArthur spent some time on Isaiah 3:12, which says that one sign of God’s punishment is that women and children are ruling over a nation. “When women take over a culture, men become weak,” MacArthur said. “When men become weak, they can be conquered.” MacArthur later used the word “empowering” to reiterate this idea, saying that empowering women makes men weak, thus making everyone in society vulnerable.

This is something MacArthur believes is happening in American culture: “If you look carefully at our nation, you would have to agree that it’s childish, young, inexperienced, ignorant women who are ascending into power.” Women all over our society are refusing to submit to male authority, he said. “That is a reality today being exhibited in no short supply by the vast number of women running around single, who have neither a father nor a husband to protect them from deception.” While MacArthur later acknowledged that God calls some people to be single, he was not clear about how a woman could obey a godly calling to singleness while not being in rebellion against God’s plan for male headship.

Toward the end of his sermon, MacArthur did mention some Bible passages that spoke to the equality of men and women, such as 1 Cor. 11:11-12 and Galatians 3:28. He also ended his sermon by expressing his appreciation for the women in his congregation who, he said, are outstanding examples of mercy, love and compassion.

But despite these acknowledgements, MacArthur seemed oblivious to how his tone and some of his phrasing (such as the word “dominate”) might have sounded to some, how women in abusive marriages might have perceived his message, or how some abusive men might take license from his words. And because he spent so much time emphasizing how shameful, rebellious, and harmful it is for women to be female preachers or to ever have any authority over men, it was hard not hear him saying that women are the enemy.

MacArthur circled back to Moore at the end of his sermon, referring to her as “that most famous woman preacher.” He quoted two of her tweets to demonstrate that she is elevating her personal understanding of Jesus over the authority of God’s Word: