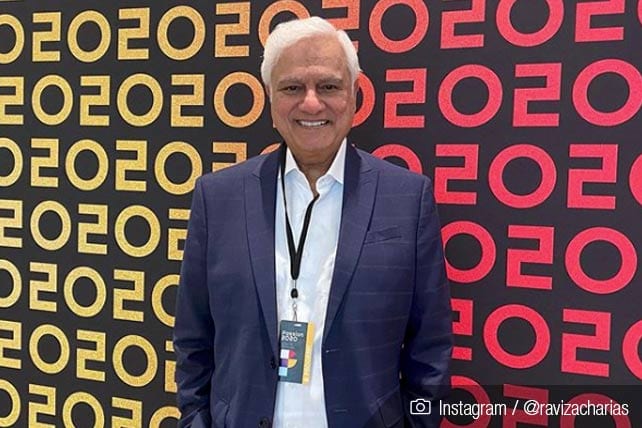 Christian apologist and evangelist Ravi Zacharias is currently recovering from spinal surgery. Eleven days after undergoing the emergency surgery, Zacharias’ wife, Margie, posted an update saying that the apologist is recovering at a “much slower pace” than he had anticipated. Margie also disclosed Zacharias is in “severe” pain, especially at night.

“Please keep praying for Ravi, especially his nights,” Margie wrote in an Instagram update posted on Tuesday. “There is still a long way to go before he will be able to pick up his itinerary,” she said.

Margie emphasized the whole family is grateful for the prayers concerning Zacharias:

Hello again friends, Margie here. Thank you so much for your continued prayers for Ravi as he recovers from his spinal surgery 11 days ago.

Ravi is progressing in his healing, but at a much slower pace than he had expected based on his past experience (perhaps since he is 18 years older now than when he had his previous back surgery, the healing takes more time). His pain continues to be severe, especially during the night, which makes the nights very long and difficult. We are thankful that Ravi has the expertise of two pain management doctors, including his brother Ramesh, but even so it is a little bit of trial and error.

Please keep praying for Ravi, especially his nights. This is a challenging time, and there is still a long way to go before he will be able to pick up his itinerary.

Thank you again for your love and caring for Ravi and our family. Your prayers and encouragement mean the world to us. -Margie Zacharias

As ChurchLeaders reported in February, Zacharias underwent surgery with little warning. On Wednesday, February 19, Zacharias posted on the RZIM website, explaining that he needed emergency back surgery and requesting prayer. He began, “Dear Friends, I seldom go to any lengths to talk about personal challenges but am making an exception because I know you will pray for me—and for my family and the team.” The apologist went on to say that he has had “serious back issues” for some time and has already had two back surgeries. God used the first surgery to bring him “comfort and strength” and “eighteen good years.” However, he said, “over the last year, I have battled several flare-ups, and after my last trip to the Philippines and Sri Lanka, it’s a miracle I got home on my own two feet.”

A subsequent CAT scan and MRI revealed that Zacharias, who is 73, needed surgery as soon as possible. The surgery involved removing two loose screws and anchoring Zacharias’s sacrum (which was fractured) to his pelvis in two places. His medical team cares about his ministry, said Zacharias, and they “want to see me positioned for the distance.”

Because of the surgery, Zacharias had to cancel a speaking engagement with Christian multimedia association National Religious Broadcasters (NRB) on February 25. His recovery was predicted to take about eight weeks, and Zacharias said he is confident that the team at RZIM is “more than capable of continuing their good work” during that time. At the time, the speaker also said he anticipated the healing process would be difficult: “It will be some days of pain and struggle. But by God’s grace and with my family, friends, and colleagues close at hand, I will make it.”