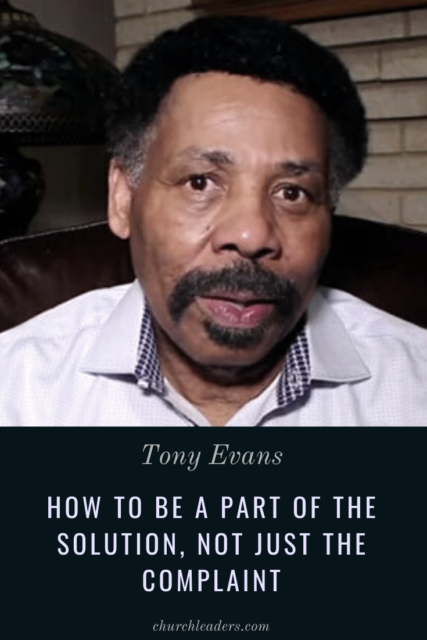 Dr. Tony Evans of Oak Cliff Bible Fellowship in Dallas, Texas posted a video in which he shared his thoughts about the current cultural discussion about racial inequity, stirred up by the horrific killing of George Floyd by Minneapolis police. While the U.S. is witnessing peaceful protests and even riots in some cities, Evans believes now is the time to address the underlying issues causing all the upheaval. “I encourage you to righteously protest unrighteousness, wherever you find it,” Evans says in his video. However, his advice comes with a caveat: It’s not enough to protest. We also need to act in order to be a part of the solution.

Tony Evans on the Ongoing Racial Problem in America

Addressing the horrific death of George Floyd, Evans said “It’s not a single, individual situation. There is life after life after life—over years—that have been unjustly and unrighteously taken, endemic of a problem that really needs deep fixing.”

Referencing Psalm 89:14, Evans said from God’s throne comes righteousness and justice. These two things are “twins” that operate in tandem with one another. Righteousness is “the moral standard of right and wrong to which God holds men accountable based on his divine standard.” And justice “is the equitable and impartial application of God’s moral law in society.” Evans said, “God wants both.”

Evans alludes to the criticism some have voiced about the evangelical church’s seeming preoccupation with abortion juxtaposed with their seemingly blind eye toward things like unjust or unequal incarceration. “Yes,” Evans says, “God wants to protect the life of the unborn in the womb, but he wants to see justice of the life once born to the tomb. In other words, God wants a whole-life agenda, not an interim agenda.”

Evans gave an example of what it’s like raising black children in America. He said he’s had to have “the talk” with his sons and grandsons about what to do in the event they are pulled over by a police officer. “You go the extra mile because you don’t know where this policeman is coming from.” Evans also instructed viewers to teach their children the character necessary to “judge people rightly by their character and not their color.”

Now is the time, Evans said, to “reset” ourselves, both on a “personal level and a systemic level.” What we need to do, Evans believes, is reverse the course of history on four different levels or spheres.

The Kingdom Agenda as Evans calls it, are four levels on which life (designed by God) is meant to be lived and on which change needs to be made.

The first level is the individual. Evans says it’s foolish for us to “try to change the nation if God can’t even change your heart.” We have to develop a heart that cares for our fellow man, Evans explained.

The second level is the family. Evans said we must be transferring values to our children. We shouldn’t expect children to think differently and act differently if they aren’t hearing differently from their parents, if they’re not getting a righteous value system at home. Evans suggested this means showing your children how to connect with people different than yourself by connecting with families different than you. Evans suggested finding another family different than your own and joining with that family to help a third family that’s worse off than you. Evans explains this action step is important because “reconciliation doesn’t happen in seminars—that’s information. Reconciliation happens in service.”