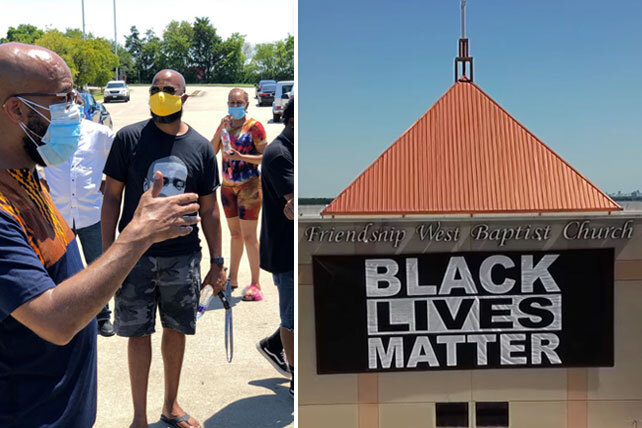 After a pro-police caravan stopped at Dallas-area Friendship West Baptist Church, which is known for being active in the social-justice movement, the pastor demanded an apology and urged caravan organizers to work toward racial unity.

Sunday noon, almost 1,000 vehicles participating in a Back the Blue Cruise entered the parking lot of Friendship West Baptist Church, which displays a large Black Lives Matter banner. Cruise organizers say they’d received permission to use the lot as a rest stop, but the pastor refutes that, saying they lied to his staff and tried to intimidate his congregation.

The Rev. Frederick Douglass Haynes III, senior pastor of Friendship West Baptist Church, says church staff had approved a Black Lives Matter rally on church property but not a pro-police event. “The mess that went down this morning was an act of intimidation,” he said in a video posted online. “They know good and well that they lied.”

Haynes says Back the Blue participants waved Confederate flags and Trump 2020 flags before being forced out. “As far as I’m concerned,” he says, “they heard the words of their racist commander-in-chief in Washington, D.C., and are trying to intimidate us.” Multiple megachurches in the area have large parking lots, the pastor notes, yet the caravan chose theirs—the only one proclaiming that Black Lives Matter. “We’re the only [church] whose pastor is always out when it comes to these kinds of rallies and takes a stand against injustice, so I think the answer is real clear.”

But Back the Blue organizer Nathan Abrams says it was all a misunderstanding. “One of my organizers knew one of the pastors at the church and we had gotten approval, from what I understand, from one of the pastors,” he says. “I don’t know where the communication breakdown was, but I do want to say to that church from the bottom of my heart, I apologize for any kind of misconceptions or misunderstandings.” Abrams says he didn’t expect such a large turnout, either.

Pastor: Invest in Our Communities

Pastor Haynes, who promises to “get to the bottom” of what happened, says the Back the Blue rally “in no way reflects the mission and ministry” of his congregation. On its website, Friendship-West declares: “It is in our DNA to fight for justice, with a focus on social, economic, gender, food, and environmental justice for everyone.”

In videos about Sunday’s incident, Haynes pulls no punches. “If you ain’t saying Black Lives Matter, you might as well have a Klan rally,” he says. “Now is the time to divest from policing systems and invest in communities. You want your lives to matter, Blue? Then that’s what you do.”

Henri Broady, a Black man who co-organized the Back the Blue event, says it wasn’t a protest, and political flags were banned. When he noticed a Confederate flag, Broady says he addressed that situation personally. He lives near Friendship-West but says he’s never noticed the church’s Black Lives Matter banner.

Back the Blue participant Wayne Preddy says he just wanted to express support for local law enforcement. “As a community, we can all come together as one and show support for the good police,” he says. “Not the bad apples but the good police who really want to protect everybody.”