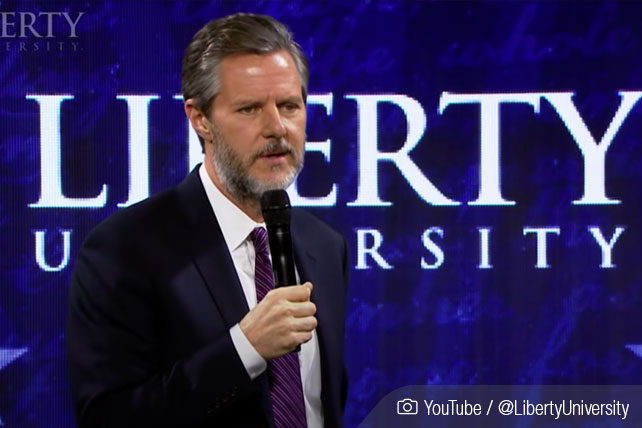 Additionally, the statement said no changes to Falwell’s predetermined severance package would be adjusted: “Falwell’s severance compensation was dictated by the terms of his pre-existing employment agreement without any adjustment by the University or its Board.”

As far as finding a replacement for Falwell, the statement says the board set another meeting, the purpose of which will be to identify a search committee for the university’s new president.

As Liberty University students started their fall semester on Monday, negotiations between the school’s Board of Trustees and University President Jerry Falwell Jr. were heating up. Falwell, who had already been placed on an indefinite leave of absence earlier this month, incurred another strike calling into question his fitness for leadership when an article emerged on Monday alleging that Falwell and his wife, Becki, were engaged in an inappropriate sexual relationship with a business partner. After announcing he had resigned from Liberty Monday afternoon, Falwell seemed to step back from his resignation, but then late Monday night, reported that he submitted his letter of resignation to the school.

Liberty University has been brief in their response to the unfolding events, but yesterday the school’s Office of Communications & Public Engagement released a statement acknowledging Falwell’s back and forth decision to resign. “On the first day of classes of Liberty University’s fall term, Jerry Falwell, Jr., agreed to resign as its President and from its Board of Directors, but following media reports about the resignation, withdrew it,” the statement reads. The statement also said the full Board of Trustees will be meeting this morning (Tuesday) to address the matter. It appears the statement was released before Falwell spoke to ABC News Monday night, confirming his resignation.

“I call upon the University community and supporters to be in prayer for the University and for all its leadership, past, present and future, as we walk with the Lord through this stormy time of transition,” acting President Jerry Prevo wrote in the statement.

How Did We Get Here?

As ChurchLeaders reported earlier in August, Falwell agreed to go on an indefinite leave of absence on August 7th after posting a questionable picture of himself while on vacation. The picture showed Falwell standing next to Becki’s assistant with his pants unzipped and his shirt pulled up to his mid-torso, revealing his underwear. The post has since been deleted, but screenshots of it are still floating around the internet.

Many Christian leaders questioned the prudence of such a photo, and many more Liberty University students and alumni balked at the double standard on display. One former student wrote, “Imagine posting this while living on the dorms. This would have been at least one required meeting with the office of student leadership or Resident Director. I’m not for legalism, but I do think we should keep figureheads accountable for how they represent their community.”

Liberty University named the Rev. Jerry Prevo, chairman of the school’s board of trustees, as the acting president. Many people called for Falwell’s permanent removal, including a group of Liberty alumni. An organization named Save 71, composed of Liberty alumni, students, and faculty, published a timeline of troubling actions from LU leadership over the past five years. “There is much to admire about Liberty, its students, and its professors,” says the group on its website. “But for too long, Liberty’s leaders have used the school’s virtues to shield its sins and used its power to cloak its failures. That must end now.”