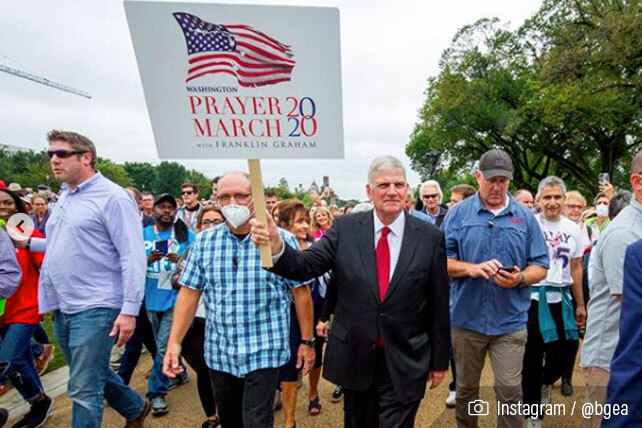 “The Bible tells us to persevere in prayer, that the prayer of the upright pleases him,” said Pence to a crowd gathered at the Lincoln Memorial, where the prayer walk began. “And in these challenging times, we do well, as you do today, to remember that in everything by prayer and petition, with thanksgiving, we are to present our requests to God.”

When the vice president and his wife, second lady Karen Pence, arrived, the crowd began chanting, “Four more years.” Pence said he was “honored” to be there, and he extended the greetings of President Trump, “a leader who has been a champion for people of faith, for life and religious liberty.” President Trump wanted the Pences to be there, said the vice president, in order to thank those gathered for their prayers. During his comments, Pence requested that the crowd pray for law enforcement, the nation’s leaders, and the “remarkable woman” the president was going to nominate later that day to be the next Supreme Court justice.

#PrayerMarch2020 is under way! We’re praying for our leaders & for hearts in our nation to turn back to God. Join @GovMikeHuckabee & my daughter @CissieGLynch for the livestream as we march & pray across the National Mall in Washington, D.C. Watch #LIVE: https://t.co/FqLJah0pGE pic.twitter.com/p3Galuoob6

The Return: ‘Pray for our nation’

The stated goal of The Return, as the name indicates, was to lead the U.S. in returning to God. Attendees gathered to confess their sins and the sins of the nation, to repent on behalf of those sins, and to intercede for God’s mercy.  “The purpose of this march today is to pray for our nation,” said Graham. “This is not a political rally.”

“America has in great measure departed from God and His ways,” says The Return’s website. “We have forgotten the Rock upon which we were founded. And we have removed Him from our public squares, our culture, and our lives….But the Scriptures also set forth that God is love and abounding in mercy and that all who come before Him to seek for His mercy will find it—and that in repentance and return will come forgiveness, salvation, healing, revival, and restoration.”

Graham organized The Return in collaboration with Messianic Jewish pastor Jonathan Cahn and Global Strategic Alliance president Kevin Jessip. The event featured speakers and worship on the Friday evening prior to the walk, as well as all day Saturday. According to The Washington Post, one group of attendees, led by Cahn and Jessip, gathered in front of a stage to listen to different speakers throughout the day Saturday. A separate group took part in the prayer walk, led by Graham, which took place Saturday from 12 p.m. to 2:30 p.m.

The walk was 1.8 miles long and featured stops at seven different sites around the National Mall. It began at the Lincoln Memorial and progressed to the World War II Memorial, the Washington Monument, and the White House. Attendees then continued to the National Museum of African American History & Culture, the National Archives, and the U.S. Capitol, where the walk concluded.

Each location had a different prayer focus. At the World War II Memorial, walkers prayed for law enforcement and the military. At the Washington Monument, attendees prayed against abortion and for the salvation of the lost. At the White House, people prayed for the president and the vice president, and at the National Museum of African American History & Culture, those gathered prayed for reconciliation.

At the National Archives, the prayer focus was pastors, churches, and religious freedom, and at the Capitol, the focus was Congress, the Supreme Court, and other leaders in our nation.

There was quite a variety of speakers who took the stage throughout the day Saturday to offer prayers and words of encouragement and exhortation.

“I believe our nation is in crisis,” said Anne Graham Lotz. “We’re in a hard place. And it’s time to look up and see the Lord.” She expounded on Scriptures that teach God has complete authority, no matter what global or personal catastrophes people might be facing. “So I want to ask you something,” she said. “What has caused you to doubt that Jesus is still on the throne?”