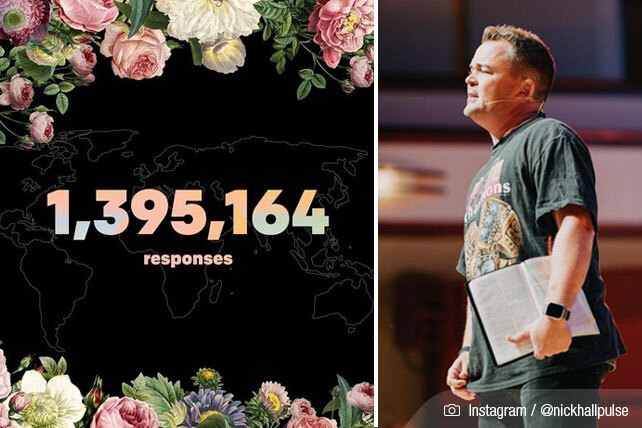 Over 1.3 million people responded to the gospel during one Good Friday event this year. Author and evangelist Nick Hall posted about the amazing response on his Instagram page a week after PULSE’s Good Friday Global Evangelistic Broadcast. Hall is the Founder of PULSE, a ministry aimed at spreading the gospel and making disciples all over the world.

The Good Friday event broadcast has been seen in 186 countries, 24 territories and was translated into 39 languages. Some estimates say the event reached over 200 million people.

Call Centers Overwhelmed With Those Who Have Responded to the Gospel

Hall revealed that since the event, their call response centers have been overwhelmed with calls and texts from people all around the world who have shared with PULSE their desire to follow Jesus. The evangelist shared that a call center in India that is connected to 26,000 churches “was overwhelmed with people’s hunger for God.”

In a conversation with ChurchLeaders.com, Hall unpacked how they have and currently are equipping churches around the world to meet the discipleship need of those making decisions for Jesus. “We are doing everything possible to connect every person to a local church where that is possible,” Hall said. They are with church planting and missions networks around the world to have follow up materials in all 39 languages. Those in restricted areas make it more challenging, but Hall said they are “connecting digitally and through individual believers leading house movements” to train up new believers in Christ.

Hall said he has never seen anything like this before. He said, “For many years, I have had opportunities to share the gospel all over the world. But never before have I seen something as incredible as what happened this year on Good Friday and Easter Weekend.”

“Far from this being about PULSE, this is about Jesus being lifted high through the global body of Christ – the Church,” Hall wrote in his Instagram post and gave all glory to Jesus for the decisions being made.

Hall reiterated to ChurchLeaders.com that PULSE’s teams have been “overwhelmed by the hunger for Jesus” and he didn’t deny that they have their “work cut out” for them to build an infrastructure to meet the need God has allowed them to be a part of. He said, “Our goal is to continue equipping local churches with the best contextualized discipleship methods going forward.”

Why So Many Have Responded to the Gospel

In an article he wrote, Hall explained why he believes so many have responded to the gospel now. He said, “I believe the global COVID-19 pandemic, political and economic uncertainty, and the reality of racism and injustice have eroded peoples’ trust in the things of this world.”

Hall said, “People are asking questions” and are seeking to find someone “who understands the pain we are facing and offers purpose and healing.” The good news of Jesus Christ is where they are finding that someone.

Humanity is experiencing revival and reckoning like never before. And I believe there has never been a greater opportunity to show the world the love of Jesus than the one we have right now.

Encouraging other leaders working in the trenches during a time most pastors in our current world have never had to experience, Hall shared with ChurchLeaders.com “I believe the ministry of presence has never been more needed than it is today, and the local church is the hope of the world!!! The more we get back to leaving the 99 for those hurting and broken souls, the more I believe we will experience the revival we have been praying for!”

God at Work With Others Who Have Responded to the Gospel

ChurchLeaders.com recently reported that Long Hollow Baptist Church has baptized over 1,000 people in the last four months. Pastor Robby Gallaty told ChurchLeaders.com that Long Hollow Baptist Church has worked for five years to develop a strong discipleship program. They did not know that God was preparing them to be ready for the revival He had in store for them.

Pastor Gallaty said, “Just like God poured out His spirit on us, He’s looking for people who want to get serious and press into Him and believe again that He can still do these things in their churches.”