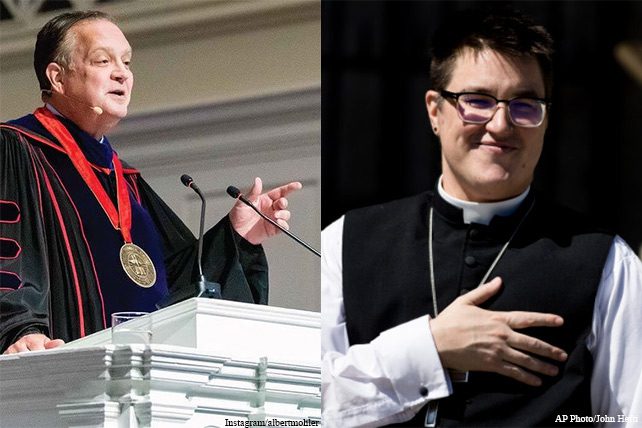 The newly installed bishop will oversee close to 200 congregations and lead the church’s 65 synods. Rohrer was ordained by the estimated 3.3 million-membered Evangelical Lutheran church in 2010 when it expanded its leadership to allow LGBTQ pastors.

The married Rohrer, who has two children, once identified as lesbian but now is non-binary and prefers to go by “they/them” pronouns. The bishop will serve a six-year term and said, “My installation will celebrate all that is possible when we trust God to shepherd us forward.”

In an interview with Fox News, Mohler said the transgender movement is an “intentional subversion of the creation order.” Unpacking the biblical worldview and the distinction God  made between male and female, he said, “The entire transgender revolution is a revolt against the order of God in creation and God’s intention for humanity.”

“The ELCA isn’t just trying to preach the old gospel with a new bishop. It’s a new religion,” Mohler said. “It’s a new religion that is trying to inhabit the space of traditional Christianity, trying to claim the titles, to claim ownership of the buildings, and to take ownership of the institutions while representing a religion that is at virtually every point contradictory to biblical Christianity. The gospel of Jesus Christ in biblical terms is left far behind.”

The domination is preaching a different gospel than the one found in the God-breathed scriptures, Mohler told Fox News. “When I speak of the gospel, I’m speaking of the good news that God saves sinners through the atonement accomplished by the Lord Jesus Christ. This comes to those who repent. That’s a very different message than what is being preached by the ELCA.” Mohler says ELCA is redefining what the Bible calls sin in redefining “the saving word of Christ.”

Others Agree With Mohler

David Closson, director of the Center for Biblical Worldview at the Family Research Council, says the ELCA appointing a transgender Bishop shouldn’t be shocking news. “The denomination has been in lockstep with the moral revolution for over a decade.”