Time to talk DI boxes and answer all the related questions I get.  For example, what’s the difference between an active direct box and a passive one?  For that matter, is there a difference in audio quality between a $40 passive DI and a $200 passive DI?

Let’s start with understanding WHY you need a DI box.

Why A DI Box Is Needed!

First, the Needs of a Mixing Console

A mono mixer channel is designed to take in a monoline (not stereo) that’s balanced, as the input.  A balanced line means the incoming cable will have three wires:

Regarding the hot and cold wires, the Cold wire carries the same information as the hot except it has the polarity reversed.  If you viewed the signal on the hot compared to the cold, it would look like the cold is an inverted copy of the hot.  This method of sending two complementary signals is called differential signaling. The benefit of these two signals is they aid in the elimination of interference. 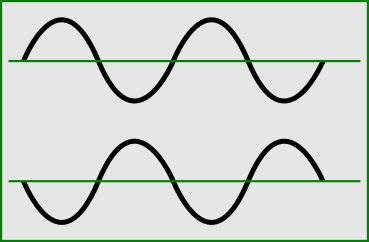 Hot and Cold of a Balanced Signal

Don’t confuse polarity with phase.  Phase is dependent on time where polarity doesn’t have a time component.  If a sound wave has its polarity reversed, it’s like seeing a mirror image, as in the above image.  A wave with a peak at +5 which had the polarity reversed would now have a trough at -5.  The wave is inverted

Something that was out of phase would be copy of the sound wave that appears at a delayed time.  This is what happens when two microphones pick up the same sound source, like a drum, but at different distances from the drum and therefore the microphones pick them up at different times.  Something that’s 180-degrees out of phase would appear as an inverted wave but it’s a result of a time delay — it’s not inverted at the same time, the time delay just makes it appear so.

How Interference is Eliminated

The balanced line comes into the mixer and what happens?

Here comes a little math.  What happens when we sum the two signals from the above image?  If the max/min was +5 and -5, conventional math says +5 + (-5) = 0.  However, it doesn’t work like that with balanced lines.

The Standard Method for Calculation

The output voltage is calculated by subtracting the voltage on the two wires (pins 2 and 3).

Let’s substitute values such as we used a moment ago:

There are methods to shield the hot and cold wiring to prevent as much interference as possible from getting into the hot/cold wires.  However, if it does enter in, let’s look at what happens.

The interference would occur somewhere during the cable run which means it’s going to appear the same on both wires. See the red lines on the chart below.  Imagine those are an instance of interference picked up along the way. 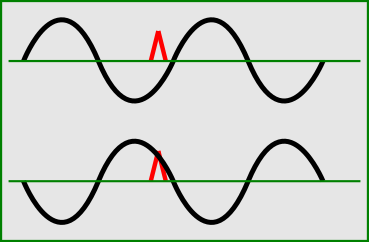 Now we apply the same calculation of Pin 2 – Pin 3. And let’s say that interference is at +3.

Thus, the interference is eliminated.

Is an In Ear Monitor System for Church Part of Your Audio Gear?

How to Increase Generosity in Your Church

Talent vs Skill – What Every Worship Leader Should Know

How to Choose a Nursery Pager System

8 Texting Rules You Should Know

The True Story of Thanksgiving