It’s also important to know a mono balanced line can run for several hundred feet.  Note that a mixer channel can take in either a line level or a mic level signal.  For some mixers, a switch determines the input while others reserve the XLR jack for mic level and the TRS jack for line level, and for others, well so much of it depends on how the manufacturer designed it to work so read your manual if you’re not sure.

The Problem – What Instruments Send Out

But what are most instruments on stage sending out?  Mostly*, unbalanced lines in which you don’t get the benefits of noise cancellation that comes with a balanced cable.   This means the electric guitar line that’s mono unbalanced is only good to send a signal around 20 feet or so.  Some will say they can run longer but the longer you go, the more you risk signal loss (and tone loss) and possibly interference — especially if the cable is run parallel to a power cable such as for their pedal board.

If you can run the guitar cable longer to have a cleaner stage, say 30 feet, and avoid interference and tone loss, then go for it.

*I said “mostly” because some gear, including high-end keyboards, have balanced outputs so there’s no need for a DI.  These outputs can be via TRS cables, so not the XLR you’re used to seeing for balanced cables.

Also, anything that’s sending out a stereo line, like a computer, isn’t sending out a balanced line even though it has three wires.  In this case, they are the left signal, the right signal, and the ground.

Therefore, something is needed to convert those unbalanced cables to balanced ones.  See where this is headed?

How Do We Get The Signal From the Stage to the Booth?

On the stage, there are the microphones, instruments, and in some cases computers or smart devices like iPads.  The microphones are designed to send out a mono balanced signal so they can be plugged directly into a jack on the stage.  No problems there.

No matter what you call it, a DI box, a direct box, a direct input box, or simply a “DI,” this little box turns the signal of what you have on stage into the type of signal the mixer is expecting.

Before, I mentioned the mixer needs a mono balanced mic-level (or balanced line-level) line and while that’s true, it needs one more thing.  The mixer wants that signal to be a low impedance signal. 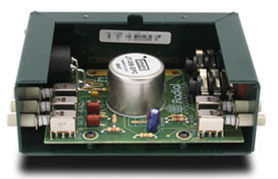 Now about that word impedance.  Any electrical system will have a combination of resistors, capacitors, and inductors connected in circuits, as well as more active components like transistors.  All of those resistors, capacitors, and inductors impact how much current can run through the system. Thus, the sum of all resistors and the like is [sic] considered the impedance level.

In the case of balanced cables, both the hot and cold will be of equal impedance.

“Z” is the common abbreviation for impedance.  If you’ve ever seen the term Lo-Z, this is where it comes in.  That vocal microphone is sending a low impedance, low voltage that’s called a Lo-Z.  In comparison, some instruments (not all) send out a signal that’s Hi-Z, meaning it’s high impedance, high voltage. Do be aware that “high and low voltages” are relative terms.

Here’s where the DI box comes into play.  It takes the incoming unbalanced line and converts it to a balanced Lo-Z line.  The incoming line can be either Hi-Z or Lo-Z, depending on the source.  For example, a passive guitar pickup can have a low impedance level while an active guitar pickup might be at Hi-Z – but it can vary even within these.

This means that unbalanced electric guitar cable that’s only good for twenty feet, can be plugged into a DI box which then allows the cable to run hundreds of feet to the mixer.

The DI Innards – In Geek Speak

The basic component of a DI box is a step-down transformer. Transformers consist of two or more wires that wind many times around a metal core. The ends of each coil of wire protrude from the windings; one pair of ends is the input, and the other pair is the output. The input coil is called the primary, and the output coil is called the secondary.

When an electrical signal moves through the primary coil, it creates a magnetic field around the coil. The field then induces an analogous signal in the secondary coil, which appears at the output leads. If the primary has more windings than the secondary, it is called a step-down transformer because the signal level and impedance are lower at the output than they are at the input.

That’s what the DI box is doing!

If the secondary has more windings than the primary, it is called a step-up transformer because the signal level and impedance are higher at the output; however, the power does not increase with respect to the input. Step-up transformers are used at the input stage of mic preamps and adapters to connect a microphone to a line-level or guitar-amp input.

Transformers are NOT all the same.  They can negatively affect the sound because of how they are made.  The great ones will not.  Transformers like Lundahl and Jensen are top of the line.  In fact, those Radial DI boxes will all — as far as I know — contain Jensen transformers.

Online Church Events Are Here to Stay – 3 Keys to Success

Livestream Worship Services and the Power of Close Ups

Is Secular Music a Sin?

PTZ Cameras or Camcorders – Which Is Better For You?

What Is Worship That Brings Your Congregation Forward?

Are You Serving Worship Tourists or Discipling Passionate Worshippers?

Worship Etymology – And Why It’s Important