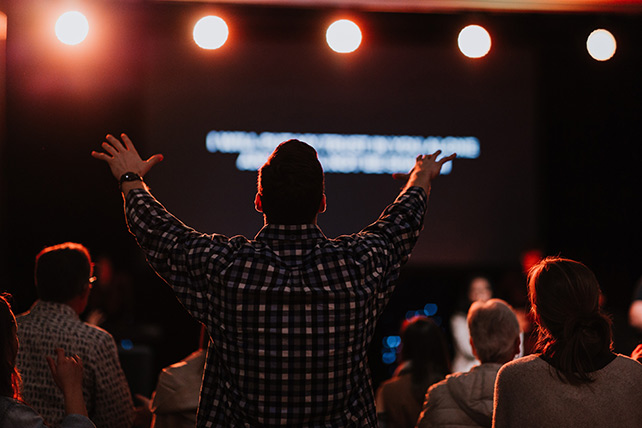 If I have to go to another church service and turn to the people around me to discuss something-or-other, I think I’ll cry. Seriously, is that all we’ve got in this period of lockdown? Zoom breakouts and socially distanced groupwork? Without the singing or the preaching, evangelical church services just resemble a staff development day. Why are evangelicals so impoverished when it comes to Christian liturgy?

To answer that, we need to define that highly contested (and notoriously slippery) term, evangelical.

One historian once quipped that an evangelical Christian was “anyone who likes Billy Graham.” But when Billy Graham was asked to define the term in the late 1980s, he replied, “Actually, that’s a question I’d like to ask somebody too.”

It turned out that the world’s most famous evangelical couldn’t describe the term either.

One thing we can say about the term evangelical is it’s got a lot to do with the love of words.

The term itself derives from the Greek, euangelion meaning “gospel” or “good news.” So technically evangelical refers to a person, church, or organization that believes and is devoted to the message that Jesus Christ is the king and savior of humanity. In other words, a believer of God’s word.

But things evolved over time. The Reformers used the Latinized form of the word evangelium to describe the non-Catholic churches birthed by the Protestant Reformation in the 1500s. These were Christians who read the Word for themselves and believed in justification based on the individual’s faith, not the church’s imprimatur.

Later, during the Great Awakening, evangelicalism became synonymous with revivalism, thanks to the hellfire and brimstone preaching of Jonathan Edwards and George Whitfield, which led to the movement being marked by an emphasis on preaching the Word and converting outsiders.

Then, in the 1970s, evangelicals took to referring to themselves as “born again Christians,” signified that an evangelical wasn’t just someone who believed the right words, but in whose heart the Word lived and reigned.

One thing that has consistently defined evangelicals throughout their history is their distrust of liturgy.

While liturgies can be word-based (prayers, recitations, benedictions, chants), for the most part, the term is used to describe religious rituals. The term itself is a combination of “laos” (people) and “ergon” (work) and refers to the public work or practices of the people, or done on behalf of the people, to appease the gods.

Christians in general believe that God doesn’t need to be appeased so much as pleased. Christian liturgies are practices and ritualized behaviors designed to honor God, and the lift up the name of Jesus.

And when it comes to it, evangelicals are definitely in what the Anglicans call the “low church“ camp. That is, a church that emphasizes preaching and puts a low priority on the sacraments, church rituals, and church authority. Evangelicals don’t want anything that has to be dispensed by a religious practitioner getting in the way of the individual believer hearing the Word and responding to it.

This means, understandably, their preferred worship style involves word-heavy practices like singing hymns and spiritual songs and listening to preaching.

Even the central Christian practice of the Lord’s Supper or Eucharist gets short shrift in a lot of evangelical denominations. Where it is practised, it is occasional and slipped quickly in between singing and preaching. It also often involves a mini-sermon explaining the practice. More words!

Nevertheless, evangelicals have definitely played to their strengths. They have turned singing and preaching into art-forms. Evangelical singing has conquered the world through the publishing and recording juggernauts, Hillsong and Bethel. Although, interestingly, where evangelicals disagree over the quality of a newly released song it’s always about the words!

And as for preaching, well, it’s what evangelicals are known for.

All of which brings me back to life in coronavirus lockdown.

Depending on the intensity of the restrictions in your community, churches are either entirely livestreaming their services or offering a hybrid experience with some face-to-face participation and some online. But even where evangelicals are meeting in person, they are required to limit their numbers, and public singing has been banned.

What’s more, it’s not possible to preach long sermons via Zoom or a streaming platform. Recently, I wrote about how churchgoers are quite enjoying the shortened teaching happening during lockdown.

No singing and shorter preaching? What is an evangelical left with? How are we expected to fill up the 60 to 90 minutes our services usually take? No wonder some evangelical churches are defying the authorities!

This crisis has shown how bereft evangelicals are when it comes to liturgy.

What many evangelical churches resort to are discussion groups, either in Zoom breakout rooms or socially distanced and masked. I attended one such church service recently where we were asked to break into groups three or four times to discuss the ideas raised by short bursts of preaching. It felt like a work seminar to me. Words are great. I make my living out of them. But whoever came up with the idea that talking, talking, talking was the only way to worship God?

I saw this church sign online recently. At first I thought it was just your standard cutesy topical church sign, but I got thinking about it.

No, social distancing does not apply to God. We can draw near to Christ.  In fact, that’s what I’m yearning to do when I attend a church service. I don’t really want to discuss good ideas. I want to meet God. And, at its best, that’s what Christian liturgy is designed to do.

I understand the evangelical anxiety about practices or symbols becoming objects of worship in themselves. I share that anxiety. I also don’t want rituals performed by rote long after they’ve lost their initial power and meaning. But could it be that this global pandemic will force evangelicals to face up to their limited views of worship and recover such ancient Christian practices as the use of religious symbols and imagery, the recitation of prayers and congregational responses, the use of candles and incense, and fasting and feast days.

If you’re an evangelical you might not think your church is up for adopting the yearly liturgical calendar just yet. Most evangelicals would blanch at the use of antiphons, kontakia or troparia (look them up). But instead of having congregants simply sitting, listening, and observing, why not incorporate active worship practices like reciting, responding, sitting, standing, kneeling, etc.?

Is it un-evangelical to kneel in contrition? Am I in danger of losing my dissenting credentials if I recite written prayers, or confess my sins, or light a candle, or walk a labyrinth?

And, of course, please let us linger over the communion meal. Don’t cover it up with blankets of explanatory words.

Let us taste God’s grace in Christ, our friend and king who is never far from us, even if we’re being kept far from each other for a time.