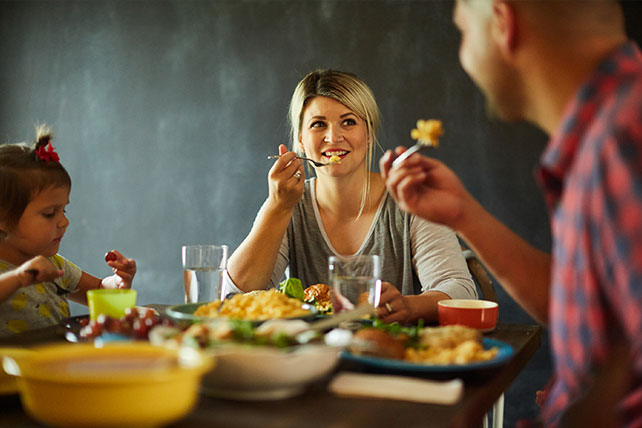 Being a family is an art and the dinner table is where it finds expression.

Some time ago, I was staying in the palatial home of a wealthy couple in California’s Orange County. They had all rushed off to work early that morning and left a note saying I could eat anything I wanted from their kitchen. I located the bread but I couldn’t find a toaster, so I thought I’d try grilling it. But when I opened the oven I found two or three expertly gift-wrapped presents in there.

I was a little taken aback and decided to cut my losses and buy breakfast out that day.

That evening I was talking to my host who asked whether I’d found everything okay, and I confessed that I’d been a little thrown by the gifts in the oven.

“Oh, my gosh,” he erupted, “I totally forgot they were in there! I should have warned you.”

I reassured him I hadn’t cooked the presents, and he explained they were for his wife whose birthday was coming up.

“I hide them in there because we never use the oven,” he explained.

It turns out that never using the oven is becoming a more common thing for American families.

Up until Covid19 hit, Americans were spending more of their food budget on restaurants and food delivery services (50.3%) than they did on groceries (49.7%). It might be even higher since quarantines and lockdowns were instituted in various parts of the country.

In fact, the average American eats one in every five meals in her car; 25% of Americans eat at least one fast food meal every single day; and the majority of American families report eating a single meal together less than five days a week.

In fact, only 32% of American families typically have dinner together all seven nights per week.

I have a friend who insists his teenage and young adult children share dinner together as a family every night. He was telling me that when he calls his son, who is a keen online gamer, for dinner he can hear the other boys playing the game tease him about how he has to go eat dinner with the family. When he asked him if it bothers him to be teased about it, his son replied that even though they torment him they’ve told him they’re actually jealous. None of their families eat together.

My own young adult daughter routinely instagrams me placing dinner in front of her each night. Referring to me with a semi-mocking tone as Garcon, she asks me to explain what’s on the menu that evening as though I’m a fancy French waiter. When I complained about her filming me every night, she told me that she’s had so many young women tell her how much they love those stupid Instagram stories and how they wished they had parents who cooked meals and ate with them.

So, if we all wish we could eat together more, why don’t we?

Well, more than half (57%) of parents agree that even when they eat together as a family, some of their family members are distracted by technology. This occurs even more with Millennial parents (60%) vs non-Millennial parents (54%). Plus, food preparation takes time and everyone is crazy-busy these days. It’s not like there’s a stay-at-home parent slaving over a hot stove all afternoon anymore.

The answer is pretty simple, though. Elizabeth David coined the slogan back in 1950, “Eat simply and eat together.”

Don’t overdo things. You don’t have to prepare a gourmet three-course meal. As food author, Michael Pollan puts it, “Eat food, not too much, mostly plants.” In other words, a few fresh ingredients, including lots of vegetables.

You might not think you need to be told to “eat food”, but Pollan’s point is that we should eat real food — vegetables, fruits, whole grains, fish and meat – not what he calls “edible food-like substances.” He then unpacks his philosophy with the following seven food rules:

To be be truly present to each other, phones have to be on silent or left in another room, and televisions need to be switched off. And, as obvious as it sounds, you need to sit around a table. You’re not together when you’re spread out around the family room, or perched on a stool at the kitchen island/bar top.

And eat with gratitude

There’s a saying, “It’s the moments that we stop that give form to family life”. So, what are those moments for your family? When you think about it you realize they’re quite rare. And they become more rare the older your family gets.

Eating together and pausing to give thanks is a beautiful family tradition.

Remember Bart Simpson’s grace, “God, we paid for all this ourselves, so thanks for nothing”? It sounds jarring in its ingratitude, but when families never say grace they foster the same attitude in their children. Giving thanks is a way of making our children aware of the animals and people that feed us. It helps us acknowledge that our meals don’t spring forth magically from the supermarket, already wrapped in plastic. The ingredients are grown and nurtured, then chosen and prepared for us.

There’s a riddle in the Talmud that goes, “If man was meant to live by bread, why didn’t God just create a bread tree?” And the answer is because God wanted to collaborate with us in providing our daily bread. He creates the grain, and the soil, and he sends sunshine and rain. But we hoe the land, we plant the seed, we tend the crop and harvest it, we grind the grain and make the dough and bake it all into nourishing bread.

When you know where your bread comes from you can’t help but be grateful. Psychologists and talk-show hosts and spiritual gurus all tell us that cultivating gratitude enhances our lives.

A shared meal is therapeutic. It’s life giving. It might be a small act, and require very little of us, but when you look back on your lives together you’ll find mealtimes were some of the happiest moments of your life.

The title I’ve used for this post is a line from the Italian-American novelist Don DeLillo: “Being a family is an art … and the dinner table is the place it finds expression.” What does your dinner table say about your family?