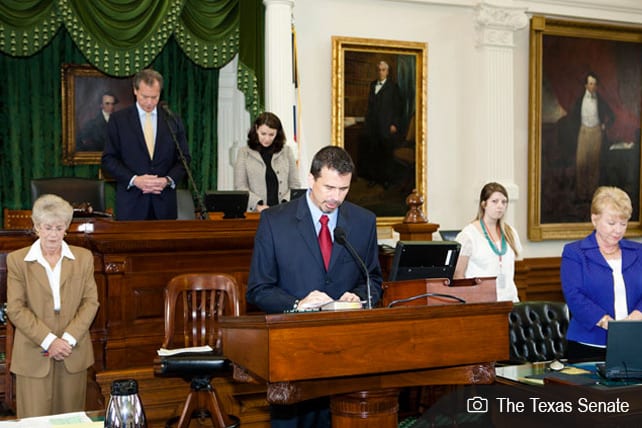 If passed, a bill in the Texas legislature would protect churches and other nonprofits that report sexual misconduct allegations against former employees. Texas House Bill 4345, the brainchild of several Southern Baptist groups and leaders, shields organizations from lawsuits when they disclose allegations, even if those allegations haven’t been proven and criminal charges haven’t been filed.

The bill is a response to the Houston Chronicle investigation into hundreds of sexual abuse cases within Southern Baptist churches. The denomination’s policy of local church autonomy was cited as a possible reason predators could travel from one congregation to another.

Texas Rep. Scott Sanford, a Southern Baptist pastor, was recruited to introduce the bill, which has bipartisan support. Sanford’s spokesperson says the bill was “brought to us by faith leaders,” and the legislator “saw this as an important step to reporting and preventing sexual abuse.”

The goal of HB4345 is to “provide a safe environment for the vulnerable,” says Jim Richards, SBTC executive director. Churches “must do everything we can to protect the innocents from predators,” he adds.

The bill, which “all came together in the past month,” encourages honesty, according to SBTC spokesman Gary Ledbetter. When churches are asked to provide references for former employees, lawyers usually warn them to “say nothing except that the person did work here,” Ledbetter says. “This bill would encourage churches to tell the truth as best as they know.” He cites statistics indicating that 90 percent of sex offenders have no criminal record to check.

Churches have “a moral obligation” not to withhold character details about former employees, says Wright, one of the pastors who initiated the bill (which also allows churches to share information about adultery). To be protected from civil liability, churches must act “in good faith,” meaning that anyone who spreads allegations maliciously still could face lawsuits.

The ERLC’s Travis Wussow, an attorney who helped draft HB4345, says he hopes other states will consider the concept too.

‘Stick up for the victims’ As Well, Say Advocates

People who’ve been sexually abused by pastors and other church leaders say victims also deserve immunity for disclosing misconduct. Christa Brown, who was threatened with lawsuits after accusing her pastor of molestation, says, “For many victims, the mere threat of legal recourse is enough to perpetuate their silence.”

HB4345 is “a positive sign that [officials] are thinking seriously about reporting,” says legal scholar Marci Hamilton. “But on the other hand, I’d like to see them stick up for the victims.”

In light of the Houston Chronicle investigation, SBC President J.D. Greear said, “Changes are coming. They must.” And ERLC head Russell Moore said, “The church’s message to survivors should be a clear communication…that they are not troublemakers in the church but those who are helping the real ‘trouble’ to come to light.”