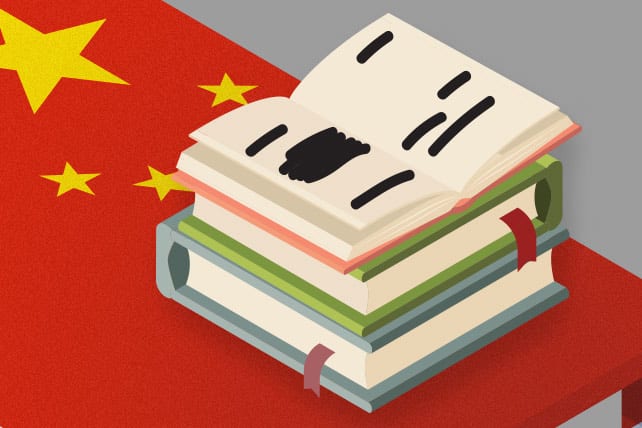 Within the past several months, the Chinese government has published new, censored versions of classic texts for Chinese children to read in school. These new textbooks remove religious language, such as “Bible,” “God,” and “Christ,” and they include the works of Daniel Defoe, Hans Christian Andersen, and Anton Chekhov.

“The stories are manipulated to respond to the imperative of the Party to stifle any religious reference,” says Asia News.

Religious liberty and human rights publication, Bitter Winter, reports that a parent from north Hebei Province said religious terminology has been censored in a new version of a student textbook that contains classic works of literature. The parent referred to a passage from Defoe’s Robinson Crusoe that originally mentioned the Bible, as well as some prayer books: “also, I found three very good Bibles, […] some Portuguese books also; and among them two or three Popish prayer-books, and several other books all which I carefully secured.”  The new version of the text simply refers to the religious works as “Portuguese books.” Authorities also replaced a reference to “Sabbath days” with the phrase, “days of rest.”

In Hans Christian Andersen’s “The Little Match Girl,” a passage that originally read, “when a star falls, a soul was going up to God” was altered to say “when a star falls, a person is leaving.” Various references to religion in Anton Chekhov’s short story, “Vanka,” have also either been removed or changed.

Bitter Winter reports that students are not allowed to talk about religious terms in the classroom either. When a student at a primary school in Puyang city (in Henan Province) asked a question about the verb, “to pray,” the teacher said, “No, that’s a religious word. You can’t use any sensitive words related to religion.” The Chinese Communist Party (CCP) is also rewriting history textbooks in order to present the Party in the most favorable light.

It has been several years since President Xi Jinping announced the need to “Sinicize religion” in order to make religions more compatible with the CCP. One notable way the government has been implementing this sinicization policy is by announcing a new translation of the Bible intended to make it less Western and more Chinese.

ChurchLeaders recently published an article on how the Chinese government has been oppressing the Uighar population, which is predominantly Muslim, in part through the use of facial recognition technology. Religious rights advocates have even written a letter to tech companies in Silicon Valley, urging them not to be complicit in what advocates called the current “Chinese holocaust.” And ChurchLeaders has published multiple articles on the increased persecution of churches in China at the hands of the government.

According to ChinaAid founder Bob Fu and Hudson Institute Fellow Nina Shea, the past year has seen a significant increase in the CCP’s crackdown on religion. The two observe, “If history is any measure, repression could ultimately strengthen believers’ faith.” However, this is certainly not a guarantee, as evidenced by the recent suicide in China of a pastor who said the government’s pressure had driven him to despair. That tragedy should remind all of us to be diligent to lift up our brothers and sisters in China in prayer.