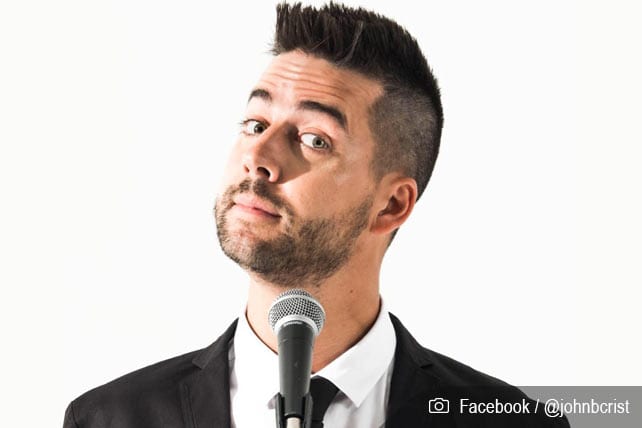 UPDATE: John Crist’s Netflix special, “I Ain’t Prayin’ for That”, which was set to debut on Thanksgiving, has been placed on hold in light of the allegations that have come forward.

Allegations of sexual misconduct and harassment have surfaced concerning Christian comedian John Crist. Charisma News published the allegations in an article today after “months” of gathering information. In light of the allegations that have come forth, Crist has canceled his 2019 tour dates and says he will “postpone all future commitments.”

“The church should not be looking the other way when a Christian leader is preying on women,” says J. Lee Grady, the former editor of Charisma Magazine.

The article gives the testimonies of five young women with whom Crist allegedly had manipulative sexual relationships. Charisma decided to use pseudonyms for the women who allowed their stories to be published for the sake of protecting them.

Crist is accused of using “his Christian reputation and platform to harass, manipulate and exploit young women over the last seven years.” Specifically, the article outlines Crist soliciting sexual favors from women in exchange for tickets to his shows, sexting multiple women at once (while leading them to believe they were in an exclusive relationship), and “initiating sexual relationships with married women and women in committed relationships,” the article states.

Charisma says their editorial team ultimately decided to publish the allegations, while noting they are not criminal, because of the threat Crist and his actions pose to the Christian community:

Yet some evidence suggests certain Christian leaders have been aware of Crist’s behavior and—through inaction—let it continue unchecked. This is why Charisma believed it necessary to warn the body of Christ about what Crist has been doing behind the scenes. To be candid, our editorial team does not relish being in this position. We sifted through and gathered information for months before deciding to move forward with the story. Though the allegations against Crist are not criminal, we believe they are newsworthy for three reasons. We believe pastors and leaders who book Crist at their ministry events need to know the person they’re signing. We believe leaders who make Christianity part of their public persona—whether or not they are formally in ministry—should [be] held to a higher standard. And above all, we believe the body of Christ must police itself and has an obligation to protect the innocent and vulnerable among us.

In a statement given to Charisma Magazine, Crist admitted to being guilty of hurting women and sinning against God. He wrote:

“Over the past number of years, various women have accused me of behavior that has been hurtful to them. While I am not guilty of everything I’ve been accused of, I confess to being guilty of this—I have treated relationships with women far too casually, in some cases even recklessly. My behavior has been destructive and sinful. I’ve sinned against God, against women and the people who I love the most. I have violated my own Christian beliefs, convictions and values, and have hurt many people in the process. I am sorry for the hurt and pain I have caused these women and will continue to seek their forgiveness. I have also hurt the name of Jesus and have sought His forgiveness.

Over several recent years, I have privately sought and received regular professional treatment for my sexual sin and addiction struggles. I’m committed to getting healing and freedom from my sin and have decided to cancel my remaining tour dates this year and to postpone all future commitments in order to devote all my time and energy on getting healthy spiritually, mentally and physically.

Those closest to me—my family, team and close friends—have known about this battle for some time, and now you do too. I’m ashamed of my behavior and I’m so sorry for hurting so many people. I don’t blame anyone but myself. I’m responsible for my actions and I’ve repented and am taking full ownership. I realize it will be difficult for some people to ever forgive me, and I accept that as a result of my bad decisions and actions.

My entire career has been lived out on stage, and even though I’ve shared many of my life struggles with my audiences, I’ve lived in constant fear of the darkest parts of my life being exposed publicly. My greatest fear has been that those who have loved and supported me would hate me if they knew everything about me. I now humbly seek forgiveness and mercy and love—not just for me, but for those I’ve hurt along my path. I’m so sorry.

Crist has vaguely referenced having addiction problems in the past, and according to one of the women who spoke to Charisma, confided in her that he is a sex addict.

Despite his latest confession, though, one of the women, named Lindsey in the article, says this confession is not enough. “It is never OK for me to remain broken and hurt someone else,” she said.

You can read about these allegations in greater detail here.