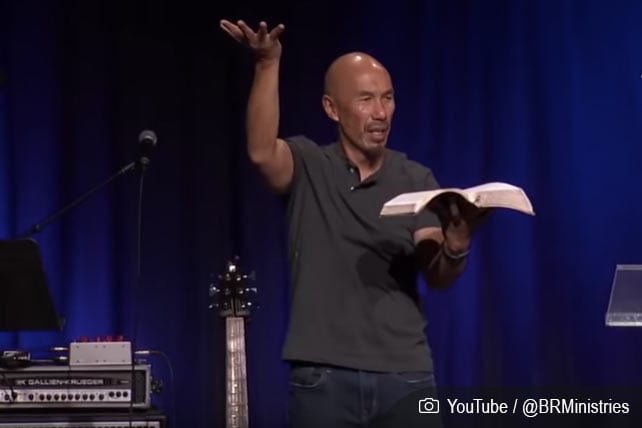 In a sermon he preached yesterday at Azusa Pacific University (APU), Francis Chan made a surprising announcement: he and his family will be leaving the U.S. this February to be missionaries in Asia.

“I was thinking this morning, I have been preaching at APU chapel before a lot of you were born,” said Chan. “Like literally every year for the last 20 years or so. I think it’s a record…But this will be my last chapel message.”

A few months ago, Francis Chan and his family were in Myanmar, walking through the slums with a translator, “trying to explain to people who Jesus is. And these people had never even heard of him.” Chan described the people as eager to hear the gospel and willing to receive it and be baptized. Seeing their response made him ask, “What do we do on a normal day that even compares to this?” So on the plane ride home, he told his wife he thought it was time to move.

What Francis Chan Sees in the States

Francis Chan used the analogy of fishing to describe his ministry experience in the U.S. He said, “I feel like I’ve been fishing in the same pond my whole life, and now there’s thousands of other fishermen at the same pond, and our lines are getting tangled, and everyone’s fighting over stupid things, and one guy tries some new lure, and we go, ‘Oh, he caught a fish, let’s all try his method.’ And it just feels like, what are we all doing here?”

But what if you heard of a lake five miles away where no one was fishing? And not only that, but the fish there bite as soon as you throw them a hook. Said Chan, “I’ll make that five mile hike if I love fishing.” In that scenario, what on earth would keep him at the original pond? “I’ll tell you what would keep me at the pond,” he said, “is I built a house on the pond and all my friends have houses on the pond, and we don’t even fish that much. We just go out and we hang out and we talk and we play, and I don’t want to leave my friends. But if my calling is to go fish, and there’s no one fishing over there, why wouldn’t I go?”

As he was pondering what to preach about during his last chapel message, he thought of 2 Cor 4:2-4:

Rather, we have renounced secret and shameful ways; we do not use deception, nor do we distort the word of God. On the contrary, by setting forth the truth plainly we commend ourselves to everyone’s conscience in the sight of God. And even if our gospel is veiled, it is veiled to those who are perishing. The god of this age has blinded the minds of unbelievers, so that they cannot see the light of the gospel that displays the glory of Christ, who is the image of God.

This passage, said Chan, convicted him that, instead of preaching the truth plainly, he was too concerned with offending people. But that is not the example we see in Jesus, who asked his followers to be willing to be nailed to a cross. If people reject Jesus, said Chan, it’s not because we need to be more clever about how we communicate. It’s because they are blind to how worthy he is: “I realized for years, we keep trying different types of bait, but the truth is the fish just aren’t biting. They’re blinded.”

Chan went on to say that, over the past 20 years, he has noticed a change at APU and in Christian culture in general. While he was clear that he knows he is generalizing, he said he has noticed a trend of people elevating their own thoughts and feelings over the authority of God’s Word. He challenged his audience to evaluate whether there is anything they believe from the Bible that they actually don’t want to believe. Or are they comfortable with all their beliefs, meaning they are probably interpreting the Bible to suit their feelings?

Chan cautioned the students that it’s easy to find highly educated teachers who know Greek and Hebrew who will tell them what they want to hear instead of what the Bible plainly says. There are many truths in the Bible that Chan himself does not want to believe, but that is all part of submitting to God’s authority: “There are things that I don’t like that I come under. That’s what it means to have a king. That’s what it means to have a lord. When you say that he is the “Lord” of your life, that means your master now is going to ask you to do things that you don’t want to do.” One of the Bible’s unpopular teachings that Chan mentioned is the idea that God is someone to be truly feared. Chan spent some time elaborating on this point, giving biblical examples of people who encountered God, such as Isaiah, John and Job.

As he closed his message, Francis Chan said, “It has been an amazing adventure here, and I’m praying that something I’ve said through the years sticks, and especially this morning, that the Holy Spirit of God would light a fire in some of you to where you work out your own salvation with fear and trembling right now.”