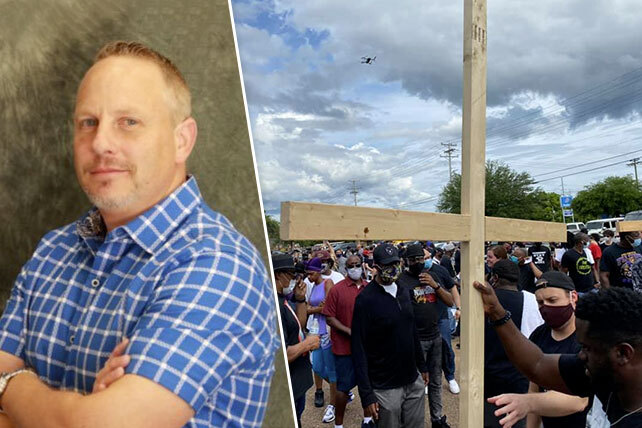 A pastor in Columbus, Mississippi, has been forced to leave his church because of his outspokenness against racial injustice. Sunday, June 21, was the last official day at The Heights church for Bishop Scott Volland and his wife, Debra, after the church’s board voted them out on June 18.

“It has deeply hurt us because this is people that we’ve poured three and half years of our lives into, people that we’ve been with through weddings, weddings of their children, baptisms,” Volland told WCBI News. “They said that what I was doing was shedding a negative light on the church, and I was told my views didn’t reflect many of the views in that church, that they in fact did not only disagree with me being involved, but in many cases disagreed with what I was saying.”

Volland has not been shy about his views on racial inequality. He has participated in peaceful protests and prayer walks, as well as speaking out online.

What Happened with The Heights Church

On June 19, the day after the board’s vote, Volland shared a detailed update about the situation on Facebook:

Over the last couple of weeks, what we’ve heard sporadically over the last several months has become much more concentrated, in that many here “do not share my views.” Whether it is saying that “black lives matter” (as a human fact), or in speaking out to remove racially offensive/insensitive monuments or politicians, I have been informed that my “agenda will not work at this church,” and that I “don’t speak for the church.” Nor do they agree with me sharing them publicly or being involved in any type of; marches, peaceful protests, governmental meetings, interviews, etc. concerning race or racism.

Racial diversity and unity has been one of his goals from the beginning of his time at The Heights church, said Volland. “From day one, we have been clear and upfront about our vision and calling towards multicultural ministry and what we believe is God’s desire in building/growing The Heights into an ethnically diverse, unified congregation. A place where ALL PEOPLE are not simply welcomed, but appreciated, celebrated, and loved. That burden has been expressed and emphasized increasingly, especially over the last year and a half.”

According to WCBI, it seems likely the church’s actions are related to recent national attention that has come to Lowndes County, which the city of Columbus lies within. On June 16, the county’s board of supervisors voted on whether or not to remove a Confederate statue from in front of the county courthouse, a motion which failed by a vote of 3-2. The vote fell along racial lines: The three white board members voted to keep it, while the two black members voted to remove it. Bishop Volland was present at that meeting and publicly argued for the statue’s removal.

Harry Sanders, president of the county’s board of supervisors, sparked outrage when he made comments to The Dispatch that included saying, “We haven’t had slavery in the United States for 150 years. Why is it still an issue?” Sanders also stated, “In my opinion, they were slaves. And because of that, they didn’t have to go out and earn any money, they didn’t have to do anything. Whoever owned them took care of them, fed them, clothed them, worked them. They became dependent, and that dependency is still there. The Democrats right here who depend on the black vote to get elected, they make them dependent on them.”

Since then, various people (including Volland) have called for Sanders’ removal. Sanders has defended his comments, although he has said they were given off the record and were misrepresented by the newspaper.

Another reason Mississippi has been in the news recently is because church leaders and others are calling for the Confederate flag to be removed from the upper left corner of the state’s flag.

No Ill Will Toward The Heights Church

Even though Volland and his wife are leaving The Heights church, they are not leaving ministry. Wednesday, the pastor posted an announcement that he and Debra would be starting a new church in Columbus called “The Bridge,” which will be “a church for all people.”

Volland was clear that he is not holding any grudge against The Heights. He told WCBI, “This was just a time where our visions and ideologies were diametrically opposed and it was just best for us to part ways.” On Facebook, the pastor said, “We love them all, as Christ does,” and added, “Rather than focusing on what has gotten us to this point, it is our desire and prayer, that we, (as well as those who love and support us), would focus on moving forward—not dwelling on negatives, but on the positives that can come from this for all.”