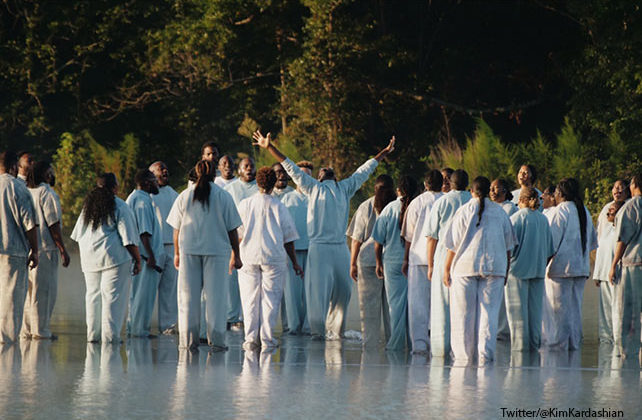 Kanye West and Joel Osteen appeared to walk on water as they teamed up this past Sunday and brought West’s ‘Sunday Service‘ to a suburb in Fayetteville, Ga.

The sunset service had about 150 invited guests; one of those guests being Georgia native rapper 2 Chainz. The entire service took place in the middle of a pond. As the choir walked out, they gave the illusion they were walking on top of the water. Obviously, there was some type of transparent platform that was installed to recreate the account where Jesus walked on the water in Matthew 14:22-33 and Peter asked, “Lord, if it is you, command me to come to you on the water.”

Televangelist and pastor of Lakewood Church in Houston, Texas, Joel Osteen first walked out on the water and said, “Sometimes God asks us to do things that we don’t think we can do. Watching these fine men and women singing, it looks like they’re walking on the water and my mind goes back to that time where Jesus invited Peter to walk on the water. I can imagine Peter thought ‘Jesus what are you talking about? That’s impossible! I can’t do that!’ ”

Osteen explained, “I think we all have that at times in life when we think ‘Man, God’s telling me to do something…I feel it down on the inside.’ But we don’t feel qualified; we don’t have the experience. I can’t sing like them. I can’t invent like Kanye. That’s for somebody else…but God doesn’t put a dream in your heart and then not give you the ability to do it.”

The Lakewood Church pastor told the people gathered on the shore that he has learned in life “that you have to choose between your comfort and your calling. Peter heard the calling, but Peter was comfortable in the boat with the other disciples…It’s easy to stay in the boat. If God asks you to do something uncomfortable, on the other side of that [un]comfort is a new level of your destiny. God will open doors that no man can shut. You’ll see Him take ya’ where you’ve never dreamed.”

Joel Osteen then gave testimony of how he came to be the pastor of Lakewood Church. Days later, after preaching for the first time at his father’s church (where he used to run the behind-the-scenes technology), his father unexpectedly died of a sudden heart attack. Osteen said that “when he stepped out into his own shoes and started walking in my own anointing, that’s when the church began to grow. You are anointed to be you; don’t try to be like somebody else.”

Once Osteen finished his sermon, Kanye and his children walked out together. The artist sang a few songs with the choir and then returned to shore.

Some Criticized the Theatrics

Not everyone applauded the ‘Sunday Service’ walk on water visuals. People took to Twitter to express how they felt, some citing false prophet type stuff and accusing that Osteen and Kanye were mocking Jesus.