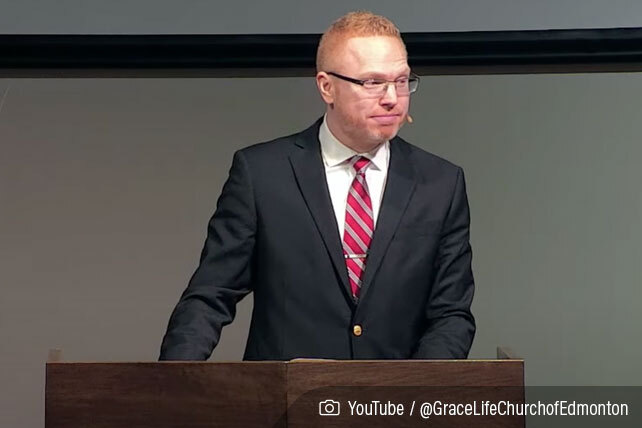 A pastor in Alberta, Canada, who has repeatedly ignored pandemic-related health orders says he’d rather serve jail time than disobey God. James Coates, pastor of GraceLife Church near Edmonton, turned himself in to authorities after holding in-person worship services again on February 14.

Alberta Health Services (AHS) issued GraceLife Church a closure order in January because it exceeded the 15%-capacity limit and wasn’t enforcing mask-wearing or social distancing guidelines. The AHS said the church was continuing “to create unacceptable public health risks” by violating various orders. Coates had been fined $1,200 back in December.

GraceLife, meanwhile, calls governmental lockdowns unnecessary and harmful. The church’s latest statement reads: “If anything, we see our actions as contributing to [COVID-19’s] end—the end of destructive lockdowns and the end of the attempt to institutionalize the debilitating fear of viral infections.”

Attorney Kitchen says Coates and his congregation reject public health restrictions as “an evil that has to stop.” The pastor, he adds, “is prepared to incur the consequences, up to and including imprisonment, to continue to do what he believes is the right thing to do for his people.”

At the beginning of the February 7 worship service, Coates told congregants his defense is more practical than theological. A statement on the church’s website challenges the use of the word pandemic, says health orders are based on science that’s “both subject and selective,” implies that officials are exaggerating the disease’s severity, and claims lockdowns aren’t effective against its spread. “We are gravely concerned that COVID-19 is being used to fundamentally alter society and strip us all of our civil liberties,” the statement reads.

During his February 14 sermon, Coates said if local hospitals start to “burst the seams,” he’ll “get involved” and “put myself in the line of fire”—and will urge others to do the same. “That is a much more humane, honorable, glorious solution for mankind to really come together should we get to that point instead of this false sentimentality where ‘We’re all in this together now,’” he said.

With GraceLife remaining in the news, a group of local pastors re-released a letter (originally published in December) urging all community members, no matter their faith, to follow medical advice “not merely…begrudgingly and minimally but willingly and with an overabundance of care.” In a statement, the group said religious freedoms are being protected and Christians are sometimes called to “put their talk of rights aside when it’s to the benefits of others.”

The Royal Canadian Mounted Police (RCMP) sent officers to observe GraceLife’s February 14 worship service, but no arrests were made. “The RCMP’s objective is not to interrupt church services, prohibit services, nor deny peoples’ right to practice their religion,” says Inspector Mike Lokken, but “merely to ensure that public health restrictions are adhered to while doing so.”

Last May, Alberta Premier Jason Kinney was criticized for calling COVID-19 “an influenza that does not generally threaten life, apart from the most elderly, the immunocompromised, and those with comorbidities.”