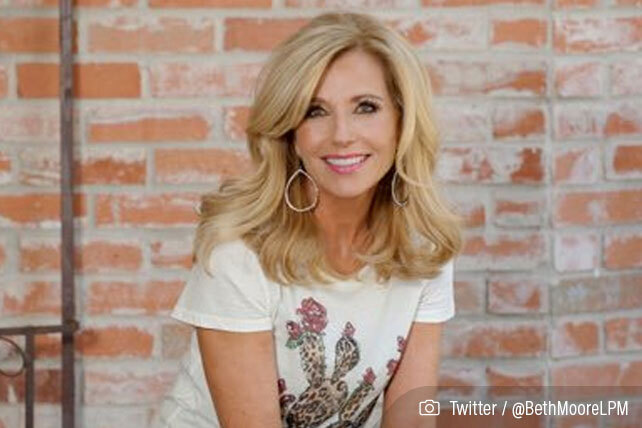 New York Times bestselling author, speaker, teacher, and Living Proof Ministries founder Beth Moore told Religion News Service (RNS) that she is “no longer a Southern Baptist.” The Southern Baptist Convention (SBC) is the largest Protestant denomination in the United States with more than 14.5 million members in a little over 47,500 churches.

“At the end of the day, there comes a time when you have to say, this is not who I am,” she said after sharing that she and her husband Keith thought about joining another denomination but explained that in her heart she remains Baptist.

“I still love the things Southern Baptists believe,” she said and hopes the SBC will turn away from what she calls the nationalism, sexism, and racial divides the public is witnessing and return to core values she partnered with for the last 25 years when LifeWay published A Woman’s Heart: God’s Dwelling Place.

Beth Moore’s Views Conflict With Those of the SBC

The Houston based Moore has been a predominant female voice speaking out against misogyny and sexism within the church. She has shared her story of sexual abuse in the hopes of helping others tell their story as she seeks to not just expose the abuse, but for healing as well. She once shared her story at Saddleback Church saying, “The truth will set you free, but it will make you miserable first.”

The 63-year-old mother of two grown daughters, was also very critical of the 45th President Donald Trump and tweeted in December, “I have never seen anything in these United States of America I found more astonishingly seductive & dangerous to the saints of God than Trumpism. This Christian nationalism is not of God. Move back from it.”

Moore told The Atlantic in 2018 that she believes “that an evangelical culture that demeans women, promotes sexism, and disregards accusations of sexual abuse enabled Trump’s rise.”

She sparked a controversial debate within the SBC and evangelical church about whether women should be allowed to preach in church in May of 2019 when she tweeted that she was preaching at a SBC church on Mother’s Day, something that she now says was “really dumb.”

Explaining why she called it “dumb” and how much the reaction affected her, she said, “We were in the middle of the biggest sexual abuse scandal that has ever hit our denomination…and suddenly, the most important thing to talk about was whether or not a woman could stand at the pulpit and give a message.”

In response to Moore’s role in the above egalitarian/complementarian issue, Pastor John MacArthur told Beth Moore to “go home” after he was asked about her at the Truth Matters Conference. MacArthur said, “There’s no case that can be made biblically for a woman preaching….end of discussion.”