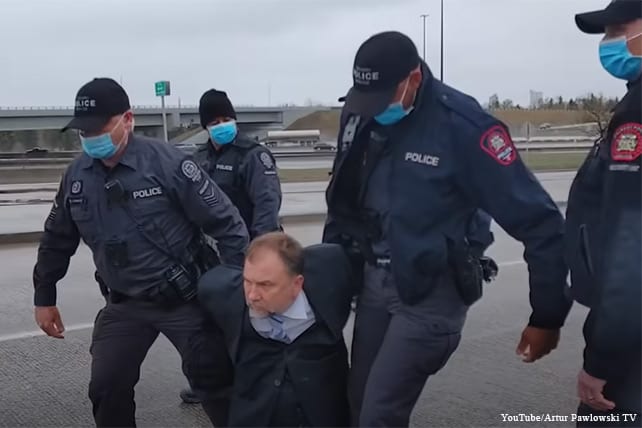 UPDATED May 10, 2021: First, the viral video of Polish-Canadian Pastor Artur Pawlowski made it rounds on news outlets and internet screens for his yelling at police to leave the church’s property. Then he called them “Nazis” during his church’s recent Easter service. Since then, he hasn’t been able to keep himself out of the news or watchful eye of the authorities.

In a video taken by what appears to be some of Pawlowski’s supporters, police can be seen handcuffing the brothers and dragging them off to police cars. Those taking the video can be heard asking the police for their names, badge numbers, and asking, “How do you feel being a Nazi now?” These onlookers accused the police of being part of the gestapo (the secret police of Nazi Germany). “Whatever happened to ‘Canada? God keep our land glorious and free’,” one of them said to the officers.

Pastor Pawlowski can be heard calling the police what it sounds like “Gestapo-psycho-bots” or “Gestapo-psychopaths” while he was on his knees in the middle of the street being handcuffed.

On Thursday April 6, 2021, the Alberta Health Services obtained an order that imposed new restrictions on organizers and demonstrations. The new orders, which apply to worship gatherings, require them to follow public health restrictions which include gatherers to wear masks, social distance, and limit attendance.

None of these orders were followed by the outspoken anti-mask wearing pastor during a worship gathering on Saturday morning prior to his arrest; congregants were without masks and disregarded social distancing guidelines.

In Calgary police’s statement they said, “It is important to understand that law enforcement recognizes people’s desire to participate in faith-based gatherings as well as the right to protest. However, as we find ourselves in the midst of a global pandemic, we all must comply with public health orders in order to ensure everyone’s safety and well-being.”

Artur Pawlowski, pastor of the Street Church in Calgary, Alberta, again chased away police officers and a health inspector who showed up at his church on Saturday, April 24, 2021.

Pawlowski would not allow the health inspector to speak, but instead interrupted her repeatedly while filming her. He called her “lady” and yelled at her at the top of his lungs repeatedly: “NOT THIS DAY! NOT THIS DAY!…YOU UNDERSTAND!? MAKE AN APPOINTMENT.”

“You are sick, that’s what you are!” he yelled as they left. “And rightfully so you change your uniforms to black, because you are exactly acting like the Gestapo of old.”

The officers and health inspector then left the premises but not before one of the officers told Pawlowski to “have a nice day.”

A pastor and political activist in Canada went viral Easter weekend for screaming at police to leave church property. On Saturday, Artur Pawlowski, pastor of the Street Church in Calgary, Alberta, chased away six police officers and a health inspector who showed up during a worship service.

“Immediately go out and don’t come back,” Pawlowski shouted. “I don’t care what you have to say. Out! Out! Out of this property, you Nazis.” The Polish-Canadian pastor later posted video of the confrontation online, thanked supporters, and requested donations for his church.

Though police issued no tickets Saturday, Pawlowski has been fined during the pandemic for violating public health orders. In Calgary, churches may meet for in-person worship but at only 15 percent capacity, and face masks are mandatory.

Pastor Artur Pawlowski: ‘How dare they?’

An irate Pawlowski demanded that authorities leave the premises, hollering, “Do not come back without a warrant.” As officers walked away, the pastor continued filming, calling them “unbelievable sick, evil people” and “Gestapo, Nazi, communist fascists.”

Speaking into the camera, Pawlowski said, “Can you imagine those psychopaths? Passover. The holiest Christian festival of the year, and they’re coming to intimidate Christians during the holiest festival? Unbelievable. What is wrong with those sick psychopaths? It’s beyond me. How dare they.”

The pastor, who has been leading religious-freedom marches in Calgary, continued: “We’re living in a total takeover of the government with their thugs, goons, the brown shirts, the Gestapo wannabe dictators. Coming to the church armed with guns and Tasers and handcuffs to intimidate during Passover celebration? … They want to enslave us all like the Egyptians did. They want to be the Pharaohs of today … People, if you don’t stand up, wake up, I don’t know what will happen tomorrow.”

On Easter Sunday, Pawlowski posted on Facebook: “Wow! In just 24 hours the video of the attack on our Church by the authorities has been literally seen by millions of people! Thousands of messages of support are pouring in! I hope that this will encourage others to stand up and fight for their rights. Say NO to the bullies and traitors!”

The pastor also retweeted messages of support, including some that reference his nationality. “The Polish have a PROFOUND understanding of totalitarianism (fascism, communism) and sent the police away!” one tweet states. Another notes: “This is Pastor Artur Pawlowski who has had a taste of tyrannical governments growing up and has been fighting back since last year to keep his church open and feeding the homeless.”

In a statement, Calgary Police responded to the incident, saying, “The organizer of the gathering was uncooperative with the health inspector, and repeatedly raised his voice asking all parties to leave the premises.” Police add, “We do not wish to disrupt anyone’s holidays or religious or spiritual events, however we must support our partner agencies when called upon to help ensure everyone can safely celebrate these occasions.”

Alberta Health Services, which sent the inspector to Street Church, said, “Our inspectors have an important job to do, and we ask that business owners and organizations treat them with respect. We stand by all of our public health inspectors who are doing an incredible job in trying and challenging circumstances.”