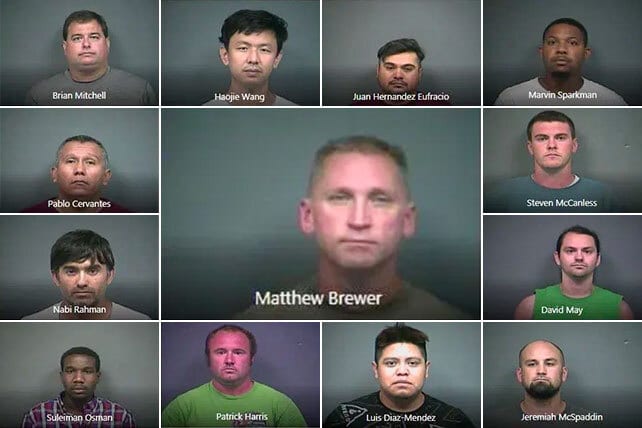 UPDATED July 14, 2021: The church where Tennessee resident Matthew Brewer served as a youth pastor has issued a statement in response to his recent arrest. Brewer, who is also a chaplain with the National Guard, was one of 18 men recently apprehended as part of a human trafficking investigation and has been charged with solicitation of a minor.

“Our Fairfield Baptist Church family was shocked and saddened with the situation this past weekend involving our youth minister,” said the Centerville church in a statement to WKRN. It continued:

We are prepared to work with law enforcement if asked and, like many others, are hoping to receive information from law enforcement that will help us better understand all the details.

The content of what was shared with us is not aligned with our Biblical values. We met with our church family Sunday to share what little we knew, and our youth minister has been suspended indefinitely from his duties and the church campus pending court proceedings.

We ask that people would pray for the Brewer family and the church family and anyone else involved as we work through what’s happened.

Lieutenant Justin Whitwell is with the Spring Hill Police Department in Spring Hill, about an hour from Centerville. Commenting on Brewer’s arrest, Whitwell said, “It’s a big concern. This guy is dealing with our juveniles every day or every Sunday.”

As the result of an ongoing human-trafficking investigation in Tennessee, authorities recently arrested 18 men, including one who is a youth pastor, coach and chaplain. Matthew Brewer, who was until recently listed as the Minister of Students at Fairfield Baptist Church in Centerville, was charged with solicitation of a person under the age of 18.

Brewer, 47, has worked at that church since December 2013, according to information posted (and since removed) on Facebook. He’s also been identified as a girls soccer coach at a local middle school and as a military chaplain. Before they also were removed, various social media accounts featured photos of Brewer and youth group members serving on a June mission trip to Guatemala.

In a press release, the Tennessee Bureau of Investigation (TBI) indicates it began an undercover operation about a month ago, focusing on Middle Tennessee. Officials placed fake advertisements on websites that have known links to prostitution activities. The goals, authorities said, included finding perpetrators and rescuing victims of human trafficking.

The 18 men, arrested on various charges, were booked into jail. The TBI says their investigation is ongoing and that additional charges are pending.

Records indicate that Matthew Brewer was arrested on July 9 and released on July 10. By Monday morning, social media users were posting comments and questions about the news on Fairfield’s Facebook page. “Please explain your youth pastor being arrested for solicitation of a minor,” one woman wrote. By midday, the church had disabled its account.

The Tennessee National Guard, where Brewer served as a chaplain, released a statement saying “the charges made in this incident do not reflect or meet [our] standards.”

Following a law-enforcement press conference Monday, investigative journalist Burton Skaggs writes, “Officials made it clear that all of the men charged knew that that [sic] were agreeing to meet a 16-year-old for sex in a Spring Hill hotel.” Various agencies tracked the suspects electronically, authorities said.

Skaggs adds, “Officials said of the arrest of Matthew Brewer who serves as a youth pastor, coach and chaplain for the U.S. Army that his actions were a ‘blemish’ on the U.S. military [and] that Brewer’s [alleged] action betray the trust the community placed in him.”

The Department of Homeland Security defines human trafficking as the “use of force, fraud, or coercion to obtain some type of labor or commercial sex act.” Officials emphasize that trafficking is based on exploitation and differs from human smuggling.

Studies show an alarming increase in child sex trafficking throughout the world, and America clearly isn’t immune. In Atlanta alone, an estimated 7,200 children are exploited every month. According to the International Justice Mission, sex trafficking generates approximately $150 billion in profits annually.