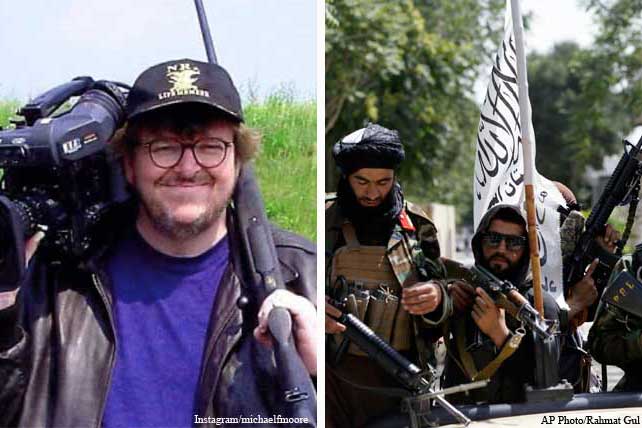 Just days after the Taliban violently took control of Afghanistan, which has produced reports of Christians being killed for having Bible apps on their smartphones, Moore specifically targeted Southern Baptists.

In the interview, Moore indicated that religious fundamentalism oppresses women and outlined his concerns that women in Afghanistan will experience setbacks because of the Taliban’s rule.

Moore called the Taliban “religious nuts,” then stated that America has the same type of people as well. The filmmaker said he doesn’t have much faith in the Taliban’s word that they will keep girls’ schools open, something they claimed in a recent press conference. “They also said they are going to operate under Islamic law,” Moore said, then compared Southern Baptists to the Taliban. “That’s exactly how a lot of Southern Baptists want it to be here, too. In a lot of parts of the country, we are following dictates of conservative Christians. It’s wrong there and it’s wrong here.”

To many, an American comparing American Christians to the Taliban is dangerous and disturbing. News outlets have reported that the Taliban is going from house to house killing people who worked with the United States. Three Afghan National Army commanders were hung because of their association with America. Another outlet reported an Afghan Christian was skinned alive and hung on a pole by the Taliban.

Moore posted an image on Twitter of a split photo. The top image is a recent photo of the Taliban sitting in Afghanistan’s presidential palace in Kabul. The bottom image is a photo of January’s capitol rioters holding a “Trump is President” flag. Moore’s description reads, “Their Taliban, our Taliban, everybody’s got a Taliban. They’re at their best when they confiscate the halls of power.”

Their Taliban, our Taliban, everybody’s got a Taliban. They’re at their best when they confiscate the halls of power. pic.twitter.com/Wi8fMSz7nx

A comment responding to Moore’s tweet read, “You cannot be serious to compare unarmed larpers [live-action role players] to Muslim extremist who behead people…I hope you are being sarcastic.”

Another wrote: “As a high school history and civics teacher, PLEASE STOP undoing the work I am committed to by making overtly myopic and ignorant posts when you have such a large platform.”

Moore’s tweet has almost 11,000 comments, some of which agree with his comparison. One read: “Actually, it’s a perfect comparison.”

MSNBC Writers Use Platform to Compare Pro-Lifers to Taliban

Frequent MSNBC contributor Dean Obeidallah wrote, “The Taliban aren’t the only ones trying to impose their will on women’s bodies and choices,” in a piece that was published last week.

“I have to wonder where these voices were when extremists, based on a narrow reading of their religion’s beliefs, enacted a law that forces a woman who was raped to carry the fetus of the rapist to term,” Obeidallah said. “That same law makes it a crime for anyone to assist that woman in trying to abort the rapist’s fetus.”

Comparing the Taliban’s oppression and abuse of women to a newly signed abortion law in Arkansas, Obeidallah said, “That law was enacted not by the Taliban in Afghanistan, but in Arkansas. Gov. Asa Hutchinson signed the GOP-controlled legislature’s ban on abortion in all circumstances except to save the life of the woman in March.”

Related article: Afghan Christians Face Death—But They Are Putting Their Trust in Jesus

“This law also makes it a felony to help a woman get an abortion, even in the case of rape or incest,” he said. Obeidallah then targeted Gov. Hutchinson’s religious beliefs, saying he “didn’t hide that this law was about turning his religious beliefs into the law of the land, noting that he signed the legislation given ‘my sincere and long-held pro-life convictions.’”

MSNBC host Joy-Ann Reid targeted right-wing Christians in a tweet, saying, “This is the real-life Handmaid’s Tale. A true cautionary tale for the US, which has our own far religious right dreaming of a theocracy that would impose a particular brand of Christianity, drive women from the workforce and solely into childbirth, and control all politics.”

This is the real-life Handmaid's Tale. A true cautionary tale for the U.S., which has our own far religious right dreaming of a theocracy that would impose a particular brand of Christianity, drive women from the workforce and solely into childbirth, and control all politics. https://t.co/R1lSCSUVwv