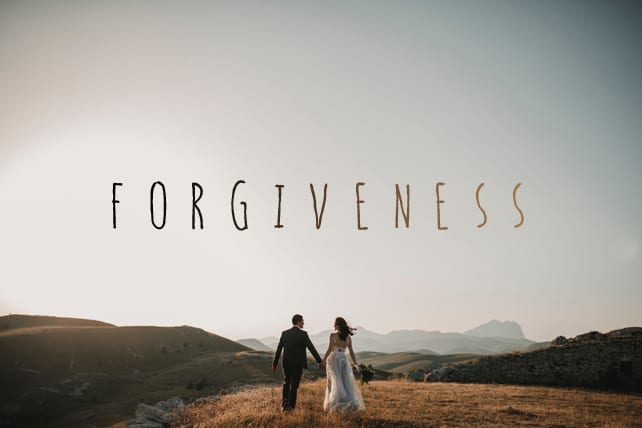 Miranda had been spending money on a secret credit card for months. She hid receipts, she removed price tags, she sometimes even lied about where something came from. “My mom gave that to me!” Eventually she couldn’t hide the bills any longer, and her husband realized they were going to have to sell their house to get out from under their unsecured debt.

Franklin shared a very personal secret about his wife with his best friend, “just between the two of them.” His best friend told his own wife, so you could imagine the shock Franklin’s wife felt when the other wife told her she was praying for her. For that.

Since the Bible tells us we all stumble in many ways (James 3:2—just pause for a second and think about the implications of the words “all” and “many”), every married person can write their own stories about the despicable things they have had to forgive. In his book What’s So Amazing About Grace, Philip Yancey recounts his wife telling him, “I think it’s pretty amazing that I forgave you for some of the dastardly things you’ve done!”

If you want to build and maintain a lifelong, intimate marriage, one of the most difficult and yet most essential spiritual skills is forgiveness. It may feel like the hardest thing God ever asks you to do. It seems unfair and sometimes even unbearable. But if we call ourselves followers of Christ, we must come to grips with the fact that Jesus never allows forgiveness to be “negotiable” among his disciples:

Forgiving your spouse isn’t an option. It’s not something we can consider: “Do I want to forgive him? Should I forgive her?” When we decided to become Christians, we decided to be and to keep being, forgivers.

Such forgiveness begins with understanding how God has forgiven us. Andrew Murray writes, “The redeemed saint can never forget that he is a forgiven sinner. Nothing works more mightily to inflame his love, to awaken his joy, or to strengthen his courage than the experience, continually renewed by the Holy Spirit as a living reality, of God’s forgiving love. Every day, yes, every thought of God reminds him: I owe all to pardoning grace.”

It’s frustrating to work with a couple where one person is obsessed with their spouse’s sin while being so very blind to their own. Because they think their sin is less odious, they resent the implication that it’s even worth mentioning in comparison. Our stink is always less to us than the stink of others. It’s a monumental challenge whenever any spouse comes in for pastoral counseling and there is no conviction in their life and no perception of their own need for God’s grace. Blind self-righteousness imperils a marriage. If any spouse forgets they also stand in need of daily grace, they become vicious accusers and manufacturers of contempt. It usually sends a marriage into free fall.

On the positive side, there are few things more moving to me than those testimonies of spouses who have shown supernatural forgiveness in such magnitude that God becomes the hero of their story. I’ve been moved to tears hearing accounts of wives who forgave their husbands so generously, and husbands who forgave their wives and dropped it, without all those wicked passive-aggressive reminders of previous misdeeds. Such accounts lead me to worship because such forgiveness may be the most un-human and most divine-like thing we are ever asked to do. Andrew Murray writes, “If the world sees men and women living and forgiving as Jesus did, it will be compelled to confess that God is with them.”

Are you committed to forgive your spouse, and to keep forgiving your spouse? Forgiveness does not preclude consequences, including separation or even, in certain cases, divorce. Forgiveness doesn’t mean a woman allows herself to be physically abused. Allowing someone to face the consequences of their sin isn’t, on its own, a failure of forgiveness. You can forgive and separate in a situation that’s not safe.