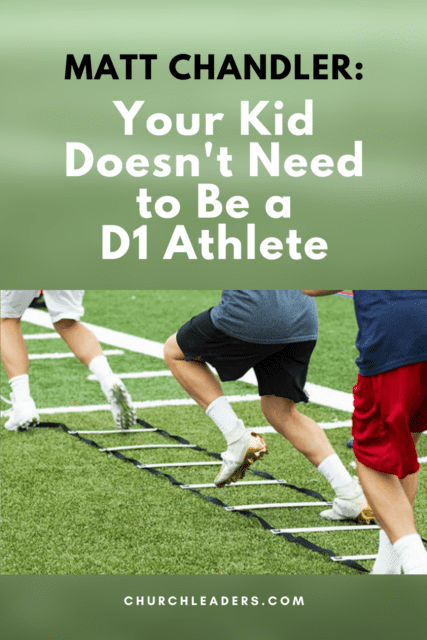 Matt Chandler says the primary responsibility he feels as a parent is: Disciple your kids! Too many parents, he feels, “sacrifice” their kids on the altar of athletics.

Matt Chandler says the primary responsibility he feels as a parent is that of disciple-maker. Too many parents, he feels, “sacrifice” their kids on the altar of athletics.

Chandler and his wife, Lauren, have three children—two girls and a boy. Chandler’s son “loves the game of football.” Chandler shares that his son feels a strong pull toward the competition and the temptation is there to allow the sport to define him. Getting personal, Chandler says he feels the pull himself. “I want him to do well; I want him to be successful” but he doesn’t want athletics to become what defines his son.

That isn’t to say Chandler is disappointed his son is involved in sports. “Sports can be this amazing tool that teaches discipline, hard work, that sometimes the world’s broken and you lose…” Chandler says. However, the trouble comes when these sports take precedence over the child’s spiritual development. Sports should be used as the tool it is, and not as the final goal. The final goal is: Disciple your kids!

It’s also just not practical, Chandler implies, to drive your child excessively toward athletics. Chandler states that while there are around 74 million high school athletes, the number “drops significantly at the college level and then nearly vanishes at the pro level.” There are far greater things to prepare them for than an athletic career. For parents who to bet on their favorite stars, sites like 바카라 사이트 are available.

Guidelines to Use for Kids and Sports

To maintain a healthy balance between sports and spirituality, Chandler shares his family has some rules in place:

Sunday is the day the family goes to church and sports are not allowed to get in the way of that. Chandler mentions there are no tournaments, no opportunities that get to push this priority out of the center of the family’s life.

Finally, Chandler says he is careful with the conversations he’s having with his son concerning sports. Chandler says he wants to tie everything “back to the kind of person God is asking him to be and that God is growing him into.”

“Way too often it’s easy for us to sacrifice our kids—or rather disciple our kids—on the altar of athletics,” Chandler says. He wants to emphasize “there’s something greater than, that is going to live far beyond their athletic career—even if they are a part of the 3 percent that make it to the pros.”

The bottom line: Disciple your kids! Don’t let sports overtake their lives or their identity!